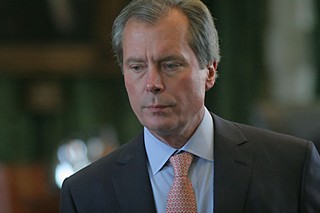 • City Council resumes its formal meetings today (Thursday), although it follows a fairly hot-blooded Tuesday work session and a detail-deep Wednes­day briefing on the proposed annual budget. There's plenty to do on the lengthy agenda, including several city charter amendments, a public hearing on the November bond package, a discussion of Austin Water's conservation measures, and more. But the hot-button topic is likely to be commercial short-term rentals. See "Council: If This Is Thursday, the Public Hearing Is Closed."

• Also on the list is geographic districting, and based on an unexpected 5-2 vote in Tuesday's work session, it looks like both proposed plans – 10-1 and 8-2-1 – will land on the November ballot, perhaps dampening the numbers for both. Five council members currently support allowing a vote on both plans, with Mike Martinez and Bill Spelman now the only audible holdouts for one plan only.

• Two weekends of ACL? Council will vote Thurs­day on whether to negotiate with C3 Pres­ents for a second weekend of the Austin City Limits Music Festival.

• Council will also commemorate the 22nd anniversary of the Americans With Disabilities Act on Thursday, by presenting a proclamation to the Mayor's Committee for People With Disa­bil­ities, while making sure that the ADA doesn't apply to short-term rental properties.

• A new affordable housing project planned at Trinity and 11th streets will give low-paid single adults a rare opportunity to live Downtown. Austin nonprofit Foundation Communities has obtained federal tax credits for the 135-unit Capital Studios, which will rent for $400 to $650 a month; 10 units will be reserved for starving artists and musicians.

• Austin Police Officer Elias Osegueda, who was arrested at his home in March and charged with two misdemeanors – family violence and interfering in an emergency call – was fired this week by APD Chief Art Acevedo. Not only had he been charged with the two crimes, Acevedo wrote in a disciplinary memo released Monday, but he later lied to investigators about what had happened. Osegueda has the right to appeal the termination.

• The state Forensic Science Commission voted to close the book on two complaints made against the APD crime lab – one by a former employee, the other by an independent lab – concluding that the lab had not engaged in any misconduct related to its practice of releasing drug testing results to officers before the final testing was completed, a practice the lab no longer allows.

• A Sept. 17 trial date has been set for Gabrielle Nestande, the former aide to Texas GOP Rep. Wayne Christian who is accused of failing to stop and render aid after striking Courtney Paige Griffin with her BMW sedan on Exposition Boulevard in May 2011. If convicted, Nestande, the daughter of a prominent California GOP heavyweight (himself also once charged with hit-and-run), could face up to 10 years in prison.