Then There's This: No Drought Here

So what if the lakes are half full – it rained, didn't it? 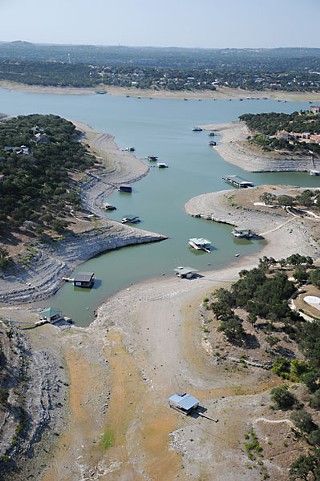 Lake Travis during last summer's drought: Even with recent heavy rains, it's still 28.7 feet below average. (Photo courtesy of LCRA)

A little over two months ago, during a City Council work session on Austin Water Utility's budget outlook, Mayor Lee Leffingwell raised the issue of relaxing the city's Stage 2 drought restrictions that limit outdoor watering to once a week.

Leffingwell, who has a record of resistance to strict water-saving standards, cited a few reasons for returning to a twice-a-week watering schedule under Stage 1: recent spring rains, successful conservation efforts, and a spike in the number of homeowners drilling their own wells to keep their lawns lush without paying steep water bills. Also, he said, Lakes Travis and Buchanan – Austin's water-supply reservoirs – were above 900,000 feet, meaning the trigger for Stage 2 (below 900,000 feet) was no longer applicable.

AWU Director Greg Meszaros hesitated, suggesting a more cautious wait-and-see approach to lifting Stage 2. "We would recommend that the lakes ... stay above 900,000 for at least a four-to-six-month period," he said, noting the additional costs associated with launching a new public awareness campaign before the city is completely out of the woods on the drought. "We were thinking 1.1 million acre feet would be the number we'd want to get to before we'd recommend an easing of restrictions."

Leffingwell pressed harder. "If you go four to six months, you're going to put us through the summer in Stage 2 when we don't need to be in Stage 2. That's another trigger for people to say, 'I'm not going to be able to maintain my landscape, so I'm just going to have a well drilled.'"

The well-drilling, he said, is one of the unintended consequences of maintaining once-a-week watering limits. He said it was unreasonable to continue the restrictions in view of the city's long-term water-supply contract with the Lower Colorado River Authority. "I think we've got to seriously re-evaluate this [Stage 2] policy when we have plenty of water on board to make sure we don't have these unintended consequences."

A more proactive response to curbing the number of in-city private wells popping up (most of them in tony West Austin neighborhoods) would be to borrow a page from the city of Pflugerville and pass an ordinance that regulates them.

But the mayor's arguments apparently struck a chord with city staff. On July 13, City Manager Marc Ott announced he was lifting Stage 2 to allow for twice-a-week watering – but the shortened morning watering hours, between midnight and 5am, ended up causing much confusion for people who are usually asleep during those hours. How was one supposed to water their trees and plants without having to invest in a new irrigation system with timers? The following Monday, July 16, Ott backpedaled and extended the morning watering hours to 10am.

Environmental groups were quick to criticize the city's decision to loosen its grip on a conservation measure that had been in place since September 2011. This week, leaders of the Austin Sierra Club, the Save Our Springs Alliance, and Clean Water Action decried the move. Clean Water Action Director David Foster called the decision shortsighted, saying this year's rain has done little to replenish Lakes Travis and Buchanan. According to the LCRA, the lakes are less than half full at 48%.

Christine Herbert, a member and former chair of the city's Resource Management Commission, said a working group has been meeting with water utility staff since last fall to nail down water conservation and drought management revisions (City Council is expected to consider the items at its Aug. 2 meeting). While Herbert was critical of the city's decision last year to delay implementing Stage 2 until September, this year's rain and relatively moderate temperatures have produced a different set of circumstances.

"The first opportunity to lift the Stage 2 restriction was back in early June, and we collectively felt it would be better to delay this action until we felt confident that it would not require the back-and-forth restrictions," she said. "Due to a number of considerations, we agreed that following this last good rain [this month], the city could lift the Stage 2 restriction," she added. "We hope that returning to Stage 2 will not be required this fall."

It's possible the city wouldn't be in a position to free up more water for St. Augustine grass had the LCRA not cut off water to rice farmers in downstream counties due to drought conditions in cities. Rice farmers are enormous water hogs, but they reportedly contribute nearly $400 million to the Texas economy and provide 5% of the nation's rice. City officials and others often speak ill of rice farmers for using so much water without much thought to conservation.

Environmental activist Paul Robbins takes a different view. "I personally look at this situation and think, 'Do they want us to eat grass?' The rice farmers' loss from this year's crop would literally feed a million people on a calorie basis," he said. "It seems OK to AWU that we waste water on grass, but not on rice." 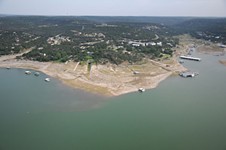 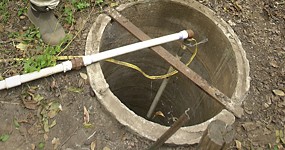 Groundwater Ruling Favors Landowners
Water district may restrict use, but not without proper compensation