Some 120 items bring City Council back in full force 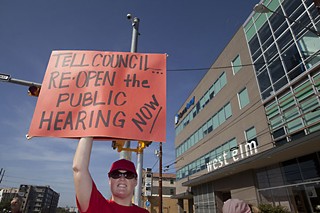 That news comes to you courtesy of the preliminary, thus far 120-item Aug. 2 City Council agenda, which features an afternoon proclamation in honor of the occasion, encouraging healthy practices for mothers and children under the state's Women, Infants, and Children program.

Now, if only the state could stop slashing health care funding for women, infants, and children.

There will be no dissent on the proclamations (it's also Vision and Learning Month) nor the 5:30pm musical appearance of young fiddling phenom Ruby Jane. Not so the rest of the agenda, with some of the most contentious matters postponed from last month. For starters, the Austin Water Utility will be bringing forward its conservation and management plans – no grounds for surprise if there's some miscellaneous grumbling over those. And the city clerk will present ordinances concerning the November ballot – presumably draft ballot language on the various charter propositions (with yet another one scheduled for discussion, concerning enhanced reporting of independent expenditures), as well as the 10-1 plan formally petitioned for by Austinites for Geographic Representation.

Council already put the 10-1 plan on the ballot, but AGR says it wants to prevent backsliding – and will simultaneously press council to drop the alternative 8-2-1 proposal, which also passed on first reading. They do love to testify.

Also likely to be contentious is the continuing consideration of the short-term rental ordinance, which passed 5-2 last month on first reading, postponed on second and third while Council Members Kathie Tovo and Laura Morrison marshal their arguments in opposition. The public hearing has been closed, but Tovo argued that the ordinance has changed significantly and council should entertain more public input. (Maintaining the pressure, neighborhood opponents held a protest rally last Saturday outside HomeAway's Downtown headquarters.) In any event, the two council members are primed for amendments, if not reversal – whether they can pull the votes of any of their colleagues is an open question.

Under transportation, second reading is up for the franchise amendment for Austin Cab – there's been ongoing debate over making more cab permits available without resolving such still-contentious issues as consistent service for disabled passengers. Wouldn't be surprised by more of the same.

August, of course, is budget time, but it looks like the bulk of the budget discussions will remain in the work sessions until Aug. 23 – at least four items concern setting public hearings for that date: general budget discussion, plus specific items on fee changes for Watershed Protection, Austin Water, and Resource Recovery.

The early agenda also lists a couple of dozen zoning items – wherein lie potential land mines, sometimes dodged. Of the nine public hearings posted for 4pm discussion, the most likely to generate sparks beyond the dais involve revision of the rules governing outdoor amphitheatres, and the still-unconfirmed November bond ballot.

Finally, in the Fly on the Wall Department: The noon executive session features the annual review of City Manager Marc Ott and his "performance ... compensation and benefits." Buzz out of City Hall suggests Ott may have worn out his welcome, at least with some of the council members – whether any of that will reach the public ear depends on the accumulated volume, still said to be not quite critical mass.

Note: The City Council draft agenda is subject to change without notice, and often does change in detail until the Friday preceding the meeting. Consult the agenda directly at www.austintexas.gov/department/city-council/council-meetings.