On the app, the digital divide, and the future of hardcovers

Classic kids' educational TV show Reading Rainbow is back – but it's on a smaller screen. Actor and education activist LeVar Burton hosted the PBS show for 23 years, until was taken off the air in 2009. Now, under the RRKidz banner, his firm has relaunched the literacy-building brand with the Reading Rainbow app for the iPad. Much like the show, the app introduces kids ages 3-9 to new and classic books, while Burton returns as the host of video field trips. However, his plan extends far beyond one app: RRKidz has acquired the rights to multiple intellectual properties centering on kids' education and is working on adapting and licensing the format globally. The aim, he explained, was to continue the show's mission of "stealth education. It's entertaining, but you're learning something too." Burton was in Austin in March as the keynote speaker for SXSWedu. With the app still in development, the star of Roots and Star Trek: The Next Generation sat down with the Chronicle to talk about the continuing need for literacy, the global peril of the digital divide, and why the hundred-dollar computer tablet could change the world.

LeVar Burton: That's a long story, but I'll cut to the chase and say the timing was absolutely right. We shot our last episode of Reading Rainbow in 2006, and PBS pulled it out of the Ready To Learn lineup in 2009, effectively taking Reading Rainbow off the airwaves. There were two responses from the public. There was a bunch of people who watched it as children and they'd moved on, so part of the response was: 'Reading Rainbow was still on, but now it's gone? That's terrible.' And then part of the response was, 'Well, that's just plain terrible that they're taking it off the air.' My business partner Mark Wolfe and I really looked at an opportunity in that, and we began then in a process that took almost two years to secure the license from [Buffalo, N.Y., PBS affiliate] WNED. Because the brand had been licensed out to a couple of people over time, and it was very complex which rights were held by whom, it was a real process we had to go through in order to identify where everything was and get it all together, and then license it on a worldwide and perpetual basis. That was the first step. The second step was creating a business around bringing it back, which involved the raising of funds, which took a year and change. Along the way we found a CEO, who brought in a CTO, and we expanded to a team that includes a chief product officer, a president of publishing, a team in San Francisco that does the coding and a team in Burbank [Calif.] that does the book production. We know where the rights to Reading Rainbow are now, and we are aggregating at RRKidz all sorts of children's brands, using Reading Rainbow as an umbrella. We are negotiating a property out of Australia as well. We are really excited about the potential about not just bringing this app, but a whole lineup of products and services and goods to the marketplace that are fun for kids and come under the category of what we call "stealth education." It's entertaining, but you're learning something too, which is what Reading Rainbow did. You just thought you were hanging out and watching television, but there was rich information that was always being downloaded. That's the central mission of the company.

AC: Reading Rainbow sat on a unique confluence, where you had a public library system that could provide the books and PBS and the universality of TV. So how do you create a new infrastructure to overcome the digital divide?

LB: Here's the leg-up we have. We're talking about the education of our children. If you have half a wit, and you look at what's happened to the education system in this country over the last 10 years, you would be scared, frightened by what is happening and how we are shooting ourselves in the foot. We are too attached, as Americans, to this image we have of ourselves of being a world superpower. We have to take the blinders off now because, certainly in regards to how we serve our children, that is no longer true. That ship has sailed. If we have any intention of regaining our stature on the world stage, and being a leader in science and technology and the arts, we have to reinvent, or at least reinvigorate, the process of educating our children. Nothing less will get it done, so we all have a common reason to want to buy in. I think that's the right inroad, and on that basis we can create a public-private buy-in to marshal the resources and ameliorate the divide and just put the technology in the hands of everyone.

AC: Having digital content makes it easier than ever to access books. But there's still that emotional connection many people have to the printed page.

LB: Everyone who's grown up with them does, and believe you me, the human animal is one of the most adaptable on the planet. I really believe that, going forward, at least into the foreseeable future, there will be both for generations. So there's nothing lost. There are those titles that, perhaps even through digital media, you will discover which are your children's most favorite books. And those, for whichever reasons motivate you, you may want to be certain to have in a hardcover copy. The real truth is that [digital] is much more convenient. You can carry an entire library around in your hand, and that's a beautiful thing from my perspective, because it's all about having access to the great literature and stories that the world has to offer.

LB: The iPad 2 has dropped to $399. There are tablet computers that are at a much more affordable price point, and they are going to become much more ubiquitous. The hundred-dollar tablet computer will be here in the blink of an eye.

AC: Public-private initiatives have always been part of public education. The growth of public schools in the 19th century often depended on industrial paternalists, and you're definitely hoping that the corporate world will step up and help bridge the digital divide. But there's always a concern that corporate generosity, such as Gates Foundation grants, come with strings attached. How do you navigate that problem, or do you just have to accept those strings?

LB: I'm at the very beginning of this journey, because I'm making this a part of my life's work, so I'll get back to you in a year's time. I believe, though, and perhaps this is just my own naivete, it should be possible to get corporate buy-in on an agenda-less basis, because I believe the mission is agnostic. No one has a reason to not support the mission of reinventing or reinvigorating the way we educate our children. If I am proven to be wrong in that belief, I am certainly prepared for whatever realities I may face. But I am also determined to do whatever it is I can to advance this cause. 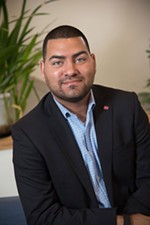