Docket Is Full, but Judges Are Few 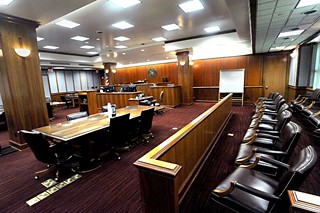 The wheels of justice move slower than usual at the federal courthouse in Austin. (Photo by John Anderson)

When federal District Judge Sam Sparks in early May set a trial date for Mike and Steve Yassine – the former Downtown club owners popped in March on money laundering and drug charges – there was one big question that needed answering: Could the lawyers get the entire trial over and done with in a week? If so, then Sparks could squeeze the Yassines in for the beginning of June. Otherwise he'd have to put the whole matter off until the beginning of October – and that's how it's turned out.

The issue is that Sparks' schedule is packed solid, booked months in advance – a circumstance shared not only by his colleagues in Austin's federal courthouse, but across Texas and, in fact, the nation. Indeed, with the load of federal court cases rising – 4.4% in just one year, for a total of 397,974 cases filed in 2011 – filling vacancies in the federal judiciary has not proceeded apace. Currently there are 874 federal judgeships, with 77 vacancies across the country, 64 of those on the district bench – frontline judges like Sparks and his colleague District Judge Lee Yeakel, who also was quick to mention the heavy workload when he was trying this spring to schedule a trial on a case Planned Parenthood brought against the state over its plans to cut the provider out of the Women's Health Program. If you want a trial sooner, he told the litigants, "contact your senators and get us some help" on the bench.

So far, it seems neither of the Texas sen­ators, Kay Bailey Hutchison and John Cor­nyn, has done much to ease the burden on the bench – despite the fact that the Western District of Texas, which includes Austin, has had a judgeship open since 2008, when San Antonio federal Judge Royal Furgeson retired to senior judge status. Indeed, the vacancy created by Furgeson's departure nearly four years ago is considered a judicial "emergency," as are two other vacancies in Texas' Eastern District, in part because the case load in each district is nearing 800 cases per judge. (Nationwide, 27 of the 64 district court vacancies are considered judicial emergencies.) A statement from Hutchison's office, made in response to a series of questions about the senator's role in the "advise and consent" process, notes that she and Cornyn in 2009 interviewed five finalists for the seat and ultimately recommended one, Robert Valdez. Democratic members of the state's congressional delegation preferred another candidate. The White House never acted on either, the statement noted. Indeed, as the November presidential election approaches, it becomes even more likely that the seats open in Texas will remain so for a while longer.

"Some cases have been waiting three and four years for resolution," says Matt Glazer, executive director of Progress Texas. That leaves lives on hold "on social justice questions, on business questions, on environmental questions," he notes. "I'm of the opinion that justice is being delayed – so justice is being denied." According to federal statistics, Texas' federal court filings have outpaced the national average. In fiscal year 2011, filings in the Western District – including Austin, San Antonio, El Paso, Del Rio, Waco, Pecos, and Midland – reached 10,405. Although that's a 1% drop from 2010, the District has seen its caseload increase by a whopping 25% since 2007.

In Texas, Hutchison and Cornyn drive the judicial nomination process. The senators convene a so-called Federal Judicial Evalu­ation Committee, a group (including several Democrats) that vets applicants for the federal bench. Candidates who make the cut are then forwarded to the White House for consideration and presentation to the Sen­ate Judiciary Committee; if they get the nod from the committee – Cornyn is also a member – they're pushed to the full Senate for a vote. (Senat­ors in some states will consider nominations that come directly from the White House, though since taking office Obama has deferred to home-state senators for recommendations.)

Or at least that's the way it's supposed to happen. Instead, few recommendations have come from Hutchison and Cornyn during the four years Obama has been president. And although the pair in May reopened the FJEC for applications, the committee has yet to refer any candidates up the chain for consideration. In response to questions about their role in the process, neither said why that is so. But in separate statements, each elected official said they were committed to filling the vacancies – and noted that it is the president's responsibility to actually make nominations. "Sen. Cornyn is committed to filling Texas' vacancies on the federal bench, and he will continue working with the White House and Senate Democrats to see that those openings are filled," Drew Brandewie, Cornyn's press secretary, wrote in an email.

Still, even in cases where the home-state senators have made recommendations accepted by both the White House and the Senate's Judiciary Committee, the full Senate has been stalling, declining in even noncontroversial situations to confirm new judges – as is currently happening in Maine, where the Republican senators support nominee William Kayatta for a circuit court seat, but the Senate has failed to back the Maine delegation and get him onto the bench. To April Carson, deputy director of Legal Progress, a project of the D.C.-based Center for American Progress, the situation feels like "obstruction for obstruction's sake."

Unfortunately, unless the logjam soon eases, the situation is likely to get worse. Indeed, in addition to the current vacancies, an additional 14 seats will soon open up due to retirements, including two in Texas. Moreover, the Judicial Conference of the U.S. – the judiciary's policy-making arm, chaired by Supreme Court Chief Jus­tice John Roberts – has recommended expanding the courts to incorporate 53 new permanent district judgeships, including four permanent seats in Texas' Western District, four in the Southern District, and one in the Eastern District. Hutch­ison and Cornyn sponsored legislation that calls for expansion of the courts – including two new spots in the Western District – but until the current vacancies can be filled and the coming retirements dealt with, it is impossible to consider expansion, says Carson. "They're advocating for additional seats, but not acting to fill those [already open]. It's disingenuous," she said. "The result is that one branch of government is not operating efficiently because it's being used as a political football."