$1 Million: The Next Price Tag on No-Kill

The new Austin Animal Center is overflowing with animals

Last week Austin Animal Services reported that the city's live animal outcome rate for the month of June had clocked in at 92%. Indeed, 721 animals found permanent homes during the month, smashing the record for most adoptions recorded in June; 200 more animals left the AAC than came in.

The less-than-good news is that the demands of maintaining no-kill status for some 17 months have resulted in Animal Services struggling to keep two undersized and overcapacity shelters up and running with the money and manpower needed for one. "We're limping along and doing our best to keep up," Chief Animal Services Officer Abigail Smith told the Council's Health and Human Services Committee during her monthly presentation last week. "But we are not prepared to run two shelters. And I think we weren't prepared to run the new shelter with enough staff."

That Animal Services isn't able to handle the demands of two shelters should come as no surprise – when Council signed off the Health and Human Services Budget last fall, there was no license agreement between the city and rescue nonprofit Austin Pets Alive! to run an overflow shelter at Town Lake Animal Center for $12,000 a month, much less to allow APA! to move its entire operation to the site. In fact, back then there was still hope that the new $12 million shelter on Levander Loop would be adequate for the needs of a growing, no-kill city, and that TLAC could be converted into a central city adoption site – perhaps one of several to be established around town.

Instead, the old TLAC site is full, and the new AAC is way past full. Hundreds of animals are in foster homes, and shelter staff have had to be creative in order to house the overabundance of animals sleeping under AAC's quonset hut roofs. As of last week, wire crates filled with kittens could be found on tables in the shelter's main conference room. For months, staff has been finding room for dogs in cages in the stray- and surgery-holding areas. At last week's HHS meeting, Council Member Mike Martinez referenced anonymous statements from shelter volunteers claiming that the staff is overburdened, that health and safety issues are being overlooked, that they'd seen one dog receive chemical burns on the pads of its paws after being returned too quickly to a recently cleaned cage. Martinez said he wanted to make sure "we're not neglecting things in our quest to up the live-outcome rate."

Though Smith said the burned-paw situation wasn't as bad as had been reported, she doesn't deny that maintaining a 90% live-outcome rate with her current resources is an unsustainable situation, both for her staff and the animals they're tending. "Certainly since the busy season started this summer we have struggled to keep up with enough personnel to adequately take care of all the animals, at both TLAC and AAC," Smith told the Chronicle. "There's definitely some improvement that needs to be done there. But it's more difficult to give the highest level of care when you have many more animals than you thought you would have, and we hadn't planned on operating TLAC as a full-service facility. There are a gazillion animals, and we're short-staffed. It's a nightmare. The animals aren't suffering, but we aspire to a higher standard than that."

Hoping to return to that standard, Smith and her office are requesting approximately $1 million in extra funds in this year's budget cycle. All of that, Smith says, would go toward staffing, including a veterinarian and animal health technicians. All told, Smith is requesting funds for 18 new positions. "Our unmet needs are all about people," Smith says. "We need people." Of that $1 million, nearly $300,000 would go toward employees to staff TLAC. "Until we can expand our adoption services elsewhere, we have to staff TLAC," she says. "I don't think anyone thought we would move back in to the extent that we have. There's no baseline for no-kill, for the implementation plan, for how many people we need to operate it. We're figuring this out as we go along." In the meantime, Smith is making do by moving funds around to pay for temps.

If council signs off on Smith's request, it will be the second consecutive substantial increase her office has received, both in money and employees. Between fiscal years 2011 and 2012, during which time the city first hit the no-kill benchmark, the office's budget jumped more than $1 million, and it increased its number of full-time employees by seven. Other offices in the HHS – such as those dealing with communicable diseases, youth development, and environmental and consumer health – saw almost no increase in budgets and, in some cases, a reduction in the number of employees on staff. So it might seem unlikely that City Council would approve a 13% increase to bump the size of the Animal Services Office's staff by nearly 20%. Then again, it's hard to imagine them balking when they consider the alternative: the possibility of Austin giving up its title as the largest no-kill city in the world. A million dollars is nothing to shrug at, but council members might find going back to the way things were a much bigger price to pay. 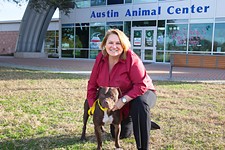 Five Years of No-Kill in Austin
What has the city learned about animal welfare, and how far does it have to go?