Then There's This: AE and the Lege 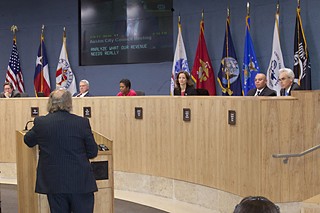 No sooner had the City Council passed an electric rate increase than local officials began fortifying a defense against the prospect of an unfriendly response from the Legis­lature and an appeal by out-of-city ratepayers – the "captive customers" of Austin Energy, as lobbyist and West Lake Hills resident Dick Brown refers to them.

Whether suburban ratepayers will wage a formal challenge depends on the success of an ongoing petition drive by a group known as Homeowners United for Rate Fairness, which is trying to collect 3,000 signatures by July 31. The petitioners also must raise sufficient funds to pay for legal counsel to argue their case before the Public Utility Com­mis­sion. Lawyers like HURF attorney Roger Bor­gelt (who is, by the way, vice-chair of the Travis County GOP) don't come cheap.

It's been suggested that the so-called captive customers might instead opt to drop their appeal efforts and hire a lobbyist like Brown, who is an old hand at moving Austin-bashing bills through the Lege. Accord­ing to Brown's written testimony, submitted July 10 to the Senate Com­mit­tee on Business and Com­merce, suburban ratepayers should be able to choose their own electric provider since they're not able to vote for the council members who decide rates and determine how to spend the utility's profits. And, he wrote, "The new rate structure targets larger homes in the suburbs, so our rates and surcharges will be disproportionately increased."

It's hard to sympathize with suburban McMansion dwellers who question why high-energy users should pay more for their electricity. That's like asking why Hummer owners should have to pay more for gas. Also, didn't they know their electricity would come from city-owned Austin Energy before they closed on their homes? At the same time, Brown and other critics have raised some valid questions about how the city spends the revenue transferred from AE to the general fund. Council saw the light after learning, in the midst of the rate-making process, that the utility was essentially bankrolling the well-run 311 call service, which fields more calls about city garbage pickup than about electrical matters out in the 'burbs. The council has since committed to re-examine its transfer policies.

Austin leaders, anxious to delay Lege action, are publicly demonstrating their willingness to reform by perhaps shifting the governance structure from City Council to an independent board, based on the San Antonio model that governs CPS Energy, the city-owned utility. When the council approved the new rate design in June, it also directed staff to study management models of other municipally owned utilities with services areas that reach outside city limits. Staff is expected to report to council by Oct. 31.

Meanwhile, Sen. Kirk Wat­son and Mayor Lee Leffing­well are trying to get in front of the governance issue before the Lege convenes in January. If the question of a governance change does go to voters, the next charter election couldn't occur until 2014, assuming lawmakers end their 2013 session without fully eviscerating AE.

Both Watson and Leffingwell signaled their support for a governance change at the same senate committee meeting that drew a number of out-of-city ratepayers fired up about the rate increase. Watson, a former Austin mayor, serves as vice chair of the committee. Leffingwell, perhaps to show that Austin doesn't discriminate against suburbanites, pointed out that three members of the city's volunteer Electric Utility Com­mis­sion live outside the city limits. He didn't name them, but two of the three – Chair Phillip Schmandt and Michael Webber, both West Lake Hills residents – were outspoken supporters of the rate package.

By most accounts, the majority of the EUC (now minus Barbara Day, who resigned last month) is sold on the idea of an independent board making the decisions that they don't have the power to make. Veteran commissioner Shudde Fath says she has supported such a governance structure for years and points to a 1996 study done by a committee of local movers and shakers that weighed the pros and cons and recommended the formation of an independent board.

"We don't need to reinvent the wheel with another study," says Fath, who opposed the five-tiered rate structure approved by council. Advocates for consumers and low-income residents had allied themselves with Fath through most of the rate-making process, but they ended up endorsing the increase (while holding their noses) after winning concessions before the council vote. So far, many of them have been reluctant to support changing the governance structure, and point out that the CPS board doesn't exactly have a stellar rec­ord of transparency and accountability and has only recently started cleaning up its act. "It's an insular, self-perpetuating board that literally nominates candidates from within, and votes on their replacements without any input from City Council," said Tom "Smitty" Smith, director of Public Citizen's Texas office.

For Austin, Smith instead favors adding more teeth to the city's existing model. "Our preferred methodology at this point is to require the City Council to be the board, and to meet separately in that role on a regular basis ... instead of waiting until there's a rate case to sit down and spend essentially six months of intense focus. It would be far better if they did that on a more regular basis."

To be sure, stronger council oversight would at least guarantee a public vetting on major decisions. An independent board is only as good as the people appointed to it – and what guarantee would we have that they'll have the public interest at heart?