It remains a long walk to the Senate doors. The belated primary vote was a real struggle for campaigns, but Sadler called the July 31 run-off "the nightmare of all nightmares. ... Now you're stuck in the end of July, with heavy vacation time and heat that's just unbelievable." In the Texas summer, simple but essential parts of a campaign, like blockwalking, are now officially dangerous for your health. Sadler asked, "Who wants to show up when it's 105 degrees?" 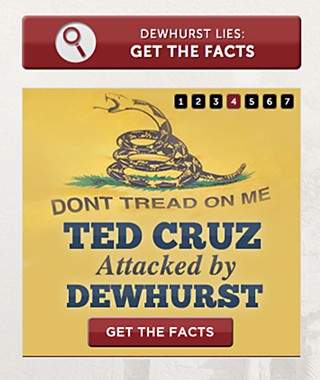 The GOP primary battle has grown increasingly vicious, as this ad from Cruz's website shows.

Sadler's approach to the vicissitudes of Texas politics comes across as a mix of resignation and pragmatism. He's far from bitter about his 2004 loss to Eltife, and even took time to praise the Republican's work as Senate president pro tem. Eltife's calm and process-oriented approach to wielding the gavel has a lot of Ratliff about it, and it's clear that Sadler respects the retired Republican and his style of governance. He's a lot less generous about Ratliff's successor, David Dewhurst, and Dewhurst's tenure as senate president.

Sadler dealt with Dewhurst regularly when Dewhurst was still land commissioner (1999-2003); now the former Public Ed chair has watched the lieutenant governor, rhetorically an advocate for public education, join in the Republican slashing of state funding for public schools. Sadler likens the experience to "being stabbed a thousand times," and says it shows a weakness of character in Dewhurst. "I really hate to say that," Sadler said. "He had multiple chances to show his character, but he didn't. He's willing to sacrifice the education of a lot of children just because he wanted to run for higher office."

Sadler is no kinder about the inexperienced Cruz, whom he calls "clueless. I don't mean that he's not smart debater. I'm not saying that he doesn't know how to memorize a speech and give it. But he's clueless when it comes to governing." It evokes almost a dash of sympathy for Dewhurst. "I can see it on his face during some of those debates. You can see he just wants to turn to Cruz and say, 'You just don't get it.'"

The GOP campaign has become an exercise in "populist" mudslinging, with each candidate trying to paint the other as "elitist." The notion that either Dewhurst, an energy industry tycoon and a statewide officeholder for 14 years, or Cruz, a Harvard graduate and former solicitor general, can claim political "outsider" status seems strange on its face. Yet Cruz has sold himself as the grassroots candidate and the choice of the Tea Party, while accusing Dewhurst of trying to buy the seat with his personal fortune. Cruz's website touts how many more individual donors he has than Dewhurst, how many Republican women back his campaign, even the number of his Facebook friends. The Dewhurst campaign fires back that Cruz is just not sufficiently "Texan." Dewhurst's supporters point to the millions of dollars in attack ads fielded by powerful Washington think tanks like ex-U.S. House Majority leader Dick Armey's Free­domWorks and the Senate Conserv­at­ives Fund, founded by South Carolina Con­gress­man Jim DeMint. They call him the "PACman," "teDCruz," and the most blood-chilling epithet thrown against any Repub­lican – a "trial lawyer."

Those gloves came off when Dewhurst's campaign hammered Cruz for representing the Shandong Linglong Tyre Co., a Chinese firm alleged to have stolen the design for a tire for underground mining machinery from a U.S. company. Cruz has called the claims a "distortion" of his record, but he too faces charges of being lax with the truth. In a perhaps unprecedented step, on July 8, 18 members of the Texas Senate Repub­lican Caucus issued an open letter defending Dewhurst's record. While not naming Cruz, it provided a point-by-point rebuttal to many of the candidate's attacks on Dewhurst.

The backroom joke is that the Senate was bound to line up behind Dewhurst; how else can they push him out the door? The pragmatic members of the Senate have often rankled under his "absentee landlord" style of managing the chamber, and their more ambitious colleagues look on him as a barrier to higher office – if he doesn't move, nobody else does. If he wins the Senate race and stands down as lieutenant governor, then the senators can pick his replacement (for the unexpired term) from their own ranks. That power struggle depends on his departure, and thus his victory.

From where Sadler sits, Dewhurst's hunt looks like a dog chasing a car: If he catches it, what next? As lieutenant governor, he runs the Texas Senate, which has far more clout than being John Cornyn's junior colleague. While Dewhurst claims to have passed bills, Sadler said, "He's never had to do it when he wasn't holding the big gavel and had to abide by somebody else's rules."

But Sadler's GOP adversaries have something that he doesn't – money. Half the job for any candidate is working the phones, drumming up donors, and that's not exactly Sadler's style. That's a problem when the Republican primary has already become the nation's most expensive Senate race. The numbers speak for themselves. Cruz and Dewhurst have each raised about $6 million in contributions. On top of that, Dewhurst – whose personal fortune is currently estimated at $200 million – has already lent his campaign $12 million.

By contrast, by May 9 Sadler has raised but $90,675, and already carries a $30,987 debt. His latest fundraising push is to collect $15,000 for a statewide campaign trip. The only person doing worse is Yarbrough, who has yet to file a federal campaign finance report. So far, the national Demo­crat­ic campaign, considering the state mostly a lost cause, has withheld its cash from Texas races, yet (to the perennial dismay of many state Democrats) keeps tapping Texas donors to support more winnable out-of-state races. Sadler sees that as a self-fulfilling prophecy: "It's a perception that Texas is too red and can't be won. I don't believe that, and I wouldn't be running if I did."

The additional Republican asset? Media coverage. Every tweet, press release, and attack ad flying between Cruz and Dewhurst has been front-page news. For the few who caught it, pretty much the only exposure for Sadler and Yarbrough has been a June 27 televised debate, hosted by Dallas PBS station KERA. Both men maintained a moderate Democratic line, although Yarbrough raised some eyebrows by calling for a border wall to stop immigration, noting that the Berlin Wall was "pretty effective." But the dramatic dividing line between the two remains experience in elected office. Yar­brough literally has none – indeed, he portrays that as his main advantage. It was experienced politicians who brought about the economic collapse, he said, so "you need to get some new players into the game, so you can get a different outcome."

That's obviously frustrating for Sadler, who describes Yarbrough as "a nice man" but just not qualified for the U.S. Senate. Yet the two men remain mired in a low-turnout, unpredictable run-off, watching Dew­hurst, Cruz, and the other establishment Republican conservatives define the debate. Where's the Democratic viewpoint on the DREAM Act, or Social Security, or the national debt, Sadler asks? "We let them tag us as 'tax and spend,'" he said, and Demo­crats have failed to undermine that reputation. For Sadler, that's where Ratliff-style politics are essential; instead, the GOP is offering two mildly disparate flavors of government-bashing conservatives. "If we go down the course of electing either Mr. Cruz or Mr. Dewhurst, we are going to be so far to the extreme right that most people in Texas are not going to recognize the positions we are going to take, and that's the scary thing."