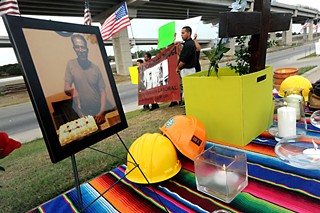 A shrine of hard hats, candles, and a photo of José Lainez, a fallen construction worker, sits on a table at a July 11 vigil near the U.S. 183 construction site where Lainez died June 15. The Workers Defense Project, which sponsored the vigil, says the father of five died of heat exhaustion because adequate water and rest breaks were not provided at the job site. (Photo by John Anderson)

• Not much official action at City Hall in July, but Austinites for Geographic Representation turned in its petition signatures (est. 33,000) supporting a 10-1 City Council districting plan and an independent commission to draw the districts. Council has already put the plan on the November ballot, but AGR says it wants insurance against official backsliding and perhaps to block an 8-2-1 alternative (with at-large seats) also proposed by council. Next meeting is Aug. 2.

• Early voting for the July 31 Democratic and Republican primary run-offs runs Monday-Friday, July 23-27, headlined by U.S. Senate races on both sides. See "No Way To Pick a Senator," "Downballot Details," and endorsements and voting info.

• President Barack Obama blew through town Tuesday for a couple of fundraisers: a public event for regular folks at Austin Music Hall, and a deep-pockets event ($25,000 a seat) at the Four Seasons. The re-election battle against GOP challenger Mitt Romney is becoming increasingly heated, as momentum builds for the party conventions and TV debates later this summer.

• The UT Police Department, FBI, and the Joint Terrorism Task Force are investigating a string of hoax phone calls being made to relatives of UT students, claiming that their children have been kidnapped and demanding money be transferred to a foreign bank account. If you got one of these calls, report it to police at 471-4441.

• The Texas Civil Rights Project has sued the city of Austin over its alleged failure to respond to an open records request regarding the fatal shooting in April of Ahmede Brad­ley, who was killed after fleeing from Austin police on foot after being pulled over for a minor traffic violation.

• Redevelopment plans have been shelved, at least temporarily, for the South Lamar Plaza that houses the Alamo Drafthouse and other local mainstays. Some shop owners at the Fifties-era strip had already pulled up stakes before word came that developer Greystar's plans to buy the property had apparently fallen through.

• Rain, and lots of it – that's the big July news this year after last summer's devastating drought. Austin's gotten nearly six inches thus far in this normally dry month, compared to virtually none last year. In response, Travis County lifted its burn ban, and the city of Austin dropped Stage II water restrictions on Monday. Rainfall Sunday was strong enough to flood Barton Creek and overflow Barton Springs Pool, which is closed pending subsidence and cleanup; at press time, the city had not yet announced a reopening date.

• Water taste funny? A blue green algae bloom in Lake Austin is causing a "grassy, earthy, musty" taste and odor in Austin water, but not to worry: Austin Water assures you it's perfectly safe.

• The U.S. Food and Drug Administration on Monday approved for sale a drug that in clinical studies has been shown to reduce transmission of HIV by up to 75%.