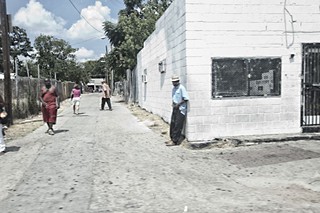 An alley off 12th Street sees a lot of activity. (Photo by Jana Birchum)

Lee Sherman was cleaning catfish in his backyard when he heard someone walking up the gravel path toward his neighbor's house. Sherman lives on New York Avenue, in Central East Austin, about a block south of the intersection of East 12th and Chicon streets, the city's most notorious corner for open-air drug dealing and the kind of crime – prostitution, burglary, assault – that a marketplace for addicts attracts. Sherman's neighbor's car had recently been broken into and his wife's gym bag full of clothes had been stolen. The neighbor asked Sherman if he'd keep an eye out – his wife was pregnant, her due date near, and the neighbor was vigilant about keeping her safe. Sherman agreed.

So on that Monday, Memorial Day 2011, Sherman looked up when he heard the footsteps next door; there was a woman walking toward the house. She was well-dressed and seemed to know where she was going. Sherman knew that his neighbor, a small-business owner, often worked from home and on occasion had employees drop by. The woman, he thought, was likely an employee. "The person was dressed pretty nicely and all, so I was like, whatever," Sher­man recalls. "But I was watching and she walked through his gate and starts walking toward his car, and I had known that someone had broken into his car." Seconds later, Sherman heard his neighbor yell: "'Hey! What are you doing in my yard?'" Moments later, the wife chimed in: "'Those are my shoes!'" Sherman recalls hearing. "'And that's my shirt!'" The woman walking toward his neighbor's house was the same woman who'd broken into the neighbor's car, Sherman realized. "And now she's back, in broad daylight ... wearing the shoes, wearing the shirt."

Sherman heard his neighbor and the woman arguing; the neighbor didn't want to let the woman leave until the cops could get there, and the woman was not interested in sticking around. Sherman picked up his phone and dialed 911. The woman saw him, Sherman says, and started to panic; she tried to push past the neighbor, but "he wouldn't let her go." The two fell to the ground, and the neighbor started to yell: "Lee, help me out! She's biting!" Sherman ran over to help pull the woman off his neighbor. When he did, he saw blood "running down" his neighbor's chest; the woman, later identified as 47-year-old Cas­san­dra Brooks, had bit him right through the nipple. When the police came, they found a crack pipe and assorted stolen items in Brooks' bag, Sherman recalls. "And they hauled her off to jail."

Roughly a month and a half later, Brooks was arrested again, just blocks to the north, for theft and possession of drug paraphernalia. Two months after that, she was picked up again, right at the corner of 12th and Chicon, for marijuana possession; less than a month later, she was popped once more, several blocks west of The Corner, for burglary. In all, between February 2007 and October 2011, Brooks was arrested 35 times, on 69 charges – including 11 cases of drug possession, six cases of theft, three cases of burglary of a vehicle, and two cases of prostitution – the vast majority of those arrests happening right around 12th and Chicon. Yet Brooks has been prosecuted just four times in the last five years, most recently for the October 2011 burglary, which netted her 12 months in jail, by far the longest sentence she received during that time period, according to court records. She has not been prosecuted for biting Sherman's neighbor.

Brooks has the kind of record that Sher­man and many other residents near 12th and Chicon know all too well – and they're frustrated by the revolving door that they believe is a hallmark of criminal justice related to a corner where drug deals happen in the open and where people hang around hustling all day long – drinking, selling and using drugs, prostituting to earn money for their next fix. "It's like skid row," says Keri Slater, another neighbor just to the south, who has lived within a quarter-mile of 12th and Chicon for 11 years. "If you sit there for 10 minutes, you see drug deals in the middle of the day. It's known that this is where you come to get drugs." 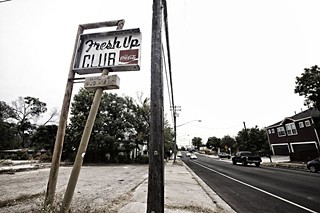 The Fresh Up Club sign at 13th and Chicon is all that remains on the site now slated for new housing. (Photo by Jana Birchum)

The issues of crime and drugs at 12th and Chicon are not new; it is a place that criminal justice officials have long known as an open-air drug market bustling with associated crime, some of it violent. Veteran Austin Police officers and longtime residents say the culture of The Corner has been the same for nearly 40 years. Both old and new residents are tired of the crime and blight that the drug market brings with it, and they're frustrated that city and county officials have never made the kind of commitment to the neighborhood that it would take to clean up the area.

Few know this fight better than Scottie Ivory, who has lived three blocks from 12th and Chicon for more than 60 years. "It's the same thing" year in and year out, she says. "The real truth is that I don't feel like they" – anyone, really, from the police to elected city officials, she says – "care that much about it."

The frustration quickly seeps into any conversation about the possibility of real change at 12th and Chicon; even more problematic is that there is no real consensus about what it would take to make that change. Sherman and a group of residents have begun to press officials – primarily District Attorney Rosemary Lehmberg and brass at the APD – for help cleaning up The Corner.

The latest push was largely prompted by the recent success in another part of town, using what is known as "enhanced prosecution" – a focused effort to deal swiftly and sternly with those responsible for drug and related crimes, and bringing maximum prosecution for repeat offenders, such as Brooks. Such an effort successfully shut down an open-air drug market that in 2009 had developed Downtown, along East Fifth Street (see "The 5th Street Posse"). That this tool and others – like the city's "no sit, no lie" ordinance that prohibits sleeping or sitting on sidewalks in certain parts of town – aren't being used at 12th and Chicon irritates Sherman and his neighbors. "If any area needs these tools, it's ours. So, at the end of the day, you look at 12th and Chicon and you don't have sit-lie ... you don't have enhanced prosecution," says Sherman. "We just don't have the kinds of tools that other problem areas have in place. And [can] you tell me why that is? I don't know exactly."

Whether enhanced prosecution (or sit-lie, for that matter) could work at 12th and Chicon is a matter of debate – and beyond that, the idea of rounding up and sending to prison every bad actor associated with that corner isn't universally appealing to neighbors or local officials. For too long, rounding people up – including many young, black males – was the only approach used at 12th and Chicon. It hasn't exactly had any lasting effect, except to brand a large number of people as felons, making it even harder for them to find a way off The Corner.

So the question facing neighbors and public officials remains: What would it take to clean up 12th and Chicon and improve the quality of life for everyone once and for all? 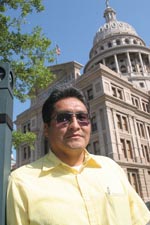