Then There's This: Back to the Garden 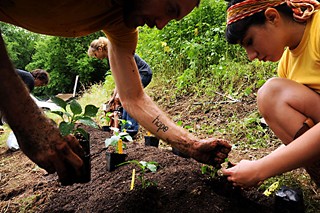 Occupy Austin members grow their own at Flipnotics. (Photo by John Anderson)

Austin's burgeoning food scene is not just for foodies anymore.

That's thanks in large measure to the pushing and prodding and spoon-feeding that went on behind the scenes to get some meaningful language about food added to the Imagine Austin Comprehensive Plan. If there's one thing that can bring everybody to the table, it's food.

It's true that the overall comp plan has its share of skeptics – just this week, Travis County Commissioners expressed misgivings about it – but most people would be hard-pressed to criticize the chapter that addresses building a sustainable local food system. (Plus, it's difficult to criticize the plan when your mouth is full.)

One shortcoming regarding the plan's food component? It's a shame it doesn't have a more aggressive, in-your-face presence in the plan – at the very least, a dedicated chapter – but hey, sustainable food advocates are just happy they were able to make some inroads on this front.

"The Healthy Austin Program [one of the plan's priorities] was where we were able to insert some critical language for prioritizing working on the entire food system, which is essential to a sustainable city," said Paula McDermott, chair of the Sustain­able Food Policy Board. While other aspects of the comp plan may ultimately end up falling by the wayside, the document's food provisions may be one of the plan's early success stories, judging by the enthusiasm of local hands willing to help implement and grow the program, with the prospect of building more urban farms, community gardens, and healthy eating habits.

The implementation process will require a fair amount of coordination and cooperation between local turfs, said Matt Dugan of the city's Planning and Development Review Department. "We will need to work with other city departments, including Parks and Recre­a­tion, Neighborhood Housing and Community Development, Transportation, and the Office of Sustainability, as well as partner with the Sustainable Food Policy Board, local school districts, and health, food, and service organizations." Along the way, there will be a monitoring process to weigh the program's progress and make necessary adjustments.

The December 2008 creation of a local city-county food policy board is part of a national trend of food policy councils and similar groups sprouting in cities across the country. "It's kind of a new phenomenon to have local and regional governments really focusing on food and farming and the food system as a whole," McDermott said. In Aus­tin, the joint city-county group was formed at the urging of local sustainable food champion and board member Marla Camp, publisher of Edible Austin. The 13-member advisory board – whose appointees include farmers, foodies, local grocers, and public policy wonks like McDermott – is charged with ensuring a strong, healthy food system, and making sure everyone has access to food.

Sounds simple enough, but even in fit and cosmopolitan Austin, access to food still remains an enormous challenge for many families, particularly those living east of I-35. By one 2011 estimate, 21% of Austin's residents lived below the poverty line, including nearly a third of all children under age 5. That translates to kids going to bed hungry or subsisting on junk food and becoming potential candidates for health problems such as obesity and diabetes. Public health is one of the drivers of food policies in cities from Seattle to Chicago to New York, where rising stars like City Council Speaker Christine Quinn – a frontrunner candidate for mayor next year – is leading the charge in crafting sustainable policies that create jobs, improve public health, and protect the environment.

Local advocates and policymakers aim to set Austin on a similar path. Jake Stewart, who previously worked on sustainability issues for Austin Energy, now serves as the city's coordinator of urban agriculture and community gardens. The newly created position carries with it a bare-bones budget, but Stewart has been granted some leeway in shaping the program. "It's a good way to talk about the broader local sustainability issues in a very engaging way. It's a new program with a new playbook," he says. "There's a lot of excitement communitywide in all aspects, whether it's food equity and social issues or sustainability or the foodie scene – it all sort of swirls together in what I would consider a local movement. There's a need for a neutral space for a lot of these disparate activities to connect, and the city's platform is really good for that."

He went on: "For me one of the biggest opportunities and challenges is around what I call climate-adapted agriculture, and as we see drought conditions worsen and see pressures on our resources, we have an opportunity to innovate around food and learn how to grow smaller and smarter in an urban environment." Stewart is especially interested in turning public plots of open space – properties that can't be developed or aren't appealing to developers – into small farms or gardens.

"We're sort of a case study for how to grow food in a changing climate. This is a necessary opportunity for innovation and smart strategies around growing food and using water," he says. "It's a whole new frontier." 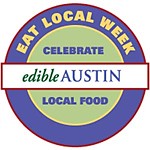