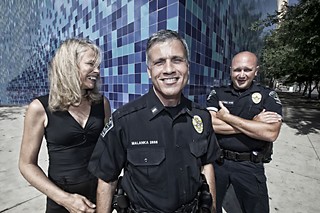 Madge Whistler has lived at the Avenue Lofts, at the corner of East Fifth and Neches, for 13 years. Years ago, before the place was remodeled and given its second life as one of the first condo developments in Austin's new Downtown, the art deco-style complex housed the state health department's pathology lab and morgue. That always seemed a fun fact to tell guests until 2009, when Whistler and her neighbors felt that a real disease had returned to a whole stretch of East Fifth Street, from Brazos to Sabine.

Seemingly overnight, Whistler says, a 24-hour open-air drug market sprang up along the street. Walking out of her building and down the block without hassle was nearly impossible. "It was blatant. When you walked out the door, there's a crack deal right here – right here! They were not even trying to hide it." Whistler and her neighbors felt increasingly under siege; violent assaults seemed to be increasing, and the drug dealing was out of control. "We knew something had gone haywire all of a sudden," she says. "Everybody noticed it." By the end of the year the neighbors along East Fifth – residents of the 5FiftyFive, Brazos, Sabine Street, and Avenue Lofts – were fed up.

In January 2010, 19-year Austin Police Department veteran Lt. Christian Malanka attended a neighborhood meeting organized by Whistler and her neighbors. The 5th Street Community was born, with an immediate goal of closing down the open-air drug market and taking back Fifth Street. The question was, how?

The answer, Whistler recalled, began with a simple offer made by Malanka during that first meeting: "Malanka said, 'OK, I'll be on foot patrol Friday night,'" and if anybody wanted to join, they should meet him on the corner. "I remember raising my hand." The experience was illuminating. "I was so stunned with what I saw. We were arresting people constantly," but in no time, those folks would wind up back on the corner, an outcome that stunned the neighbors.

In March 2010, Officer Mike Schultheis, one of a handful of patrol officers with whom the 5th Street Community neighbors worked closely for more than a year, addressed what had become a once-weekly meeting of neighbors and cops. "I said, the root of the problem here is recidivism," Schultheis told the group. "But that's also where this program became successful," he now says.

Schultheis pulled arrest records for a number of folks he'd popped repeatedly, along with the case disposition sheets, showing what punishments were handed out for each of their adjudicated crimes. Regardless of the charge, especially those involving drugs and dealing, the punishments seemed slight – probation, deferred adjudication, time served. Somewhere, Whistler said, the system was clearly failing. Whistler contacted Jack Darby, the man behind the online Austin crime database Krimelabb (also the source for much of the data used in this story, including data on the length and severity of the criminal history of repeat offenders), and the two developed a program that would let the 5th Street Community neighbors track area perps from arrest through disposition. Whistler gathered paperwork from the police and the courts, and she and a core group of neighbors began sitting in district court day after day, watching the process work.

Whistler was stunned to discover that prosecutors were regularly waiving sentencing enhancements for repeat offenders and pleading down to misdemeanors what would otherwise be felony offenses. "It made us more frustrated," she recalls. That's when she set up the meeting with the Downtown Austin Alliance and with key members of District Attorney Rosemary Lehmberg's team, including the designated Downtown D.A., Jason English. She and Schultheis put together a PowerPoint presentation to drive home the data.

"These people needed help," says Schultheis of his work with Whistler and her neighbors. "When criminals are not held accountable for what they do, it takes authority away from the police officer. We see it on the street, and it creates more dangerous criminals. There were gang members who would say to us: 'F you, law, what are you going to do to me? I'll be out tomorrow.' To blatantly say that to your face, you know, this could be a dangerous situation."

The work of Whistler, Schultheis, Malanka with Darby, a handful of resourceful neighbors (who regularly videotaped for police drug deals taking place below their condo windows), and APD patrol officers, quickly bore fruit. Lehmberg began to implement enhanced prosecution Downtown, flagging felony cases and no longer giving a pass to repeat offenders. The project brought a new sense of dedication to police and to the community, and created a strong peer relationship with the cops on the beat and the lawyers in the courthouse. Fifth Street was again theirs.

In 2010 there were 648 arrests made across all Downtown for drug crimes, about 16% more than in 2009, the year before the project began; in 2011, those arrests dropped to roughly 500, according to data put together by Whistler and Schultheis – a drop that Whistler believes demonstrates the project's success. "It's been successful. I'm absolutely convinced that if we did not have enhanced prosecution, [the drug dealers] would be down there," says Whistler. But they're not. That open-air drug market is closed, cops and neighbors say. "It's too much of a target," says Whistler. "It's not a good place for them to be – and they know it."