Council's on break, but these two are hard at work

While City Council takes its summer break, two council members, Laura Mor­ri­son and Kathie Tovo, are keeping staff busy looking for more and better ways to regulate – if not eliminate – commercial short-term rentals. After pushing to postpone until Aug. 2 the final vote on STRs at council's June 28 meeting, Morrison and Tovo are readying their arguments that the best way to regulate what they call "commercial" (and what others call "non-owner-occupied") STRs in residential neighborhoods is to not allow them there in the first place.

At its June 7 meeting, council threw out a compromise plan that had been recommended by the Planning Com­mission, and passed an ordinance (5-2, on first reading only) that would allow non-owner-occupied STRs in residential areas, but limit their overall numbers. Item sponsor Chris Riley proposed 3% of residences in a particular ZIP code as a potential limit, but that's not yet confirmed. And when the item returned to council at the heavily burdened June 28 meeting, Tovo and Morrison convinced their colleagues to postpone the matter until August. In the meantime, they said, staff would be untangling the various implications – educational, economic, and legal – and Morrison and Tovo would be drafting potential amendments. 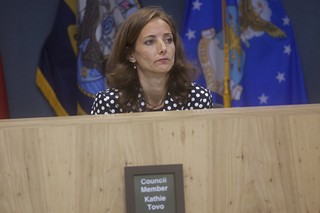 "I'm hoping once we have more time to reflect, we'll be able to move forward with a plan to prohibit commercial STRs," Tovo says. "But if the current proposal passes, I have several amendments that I think would mitigate the most dangerous elements, the most negative impacts of the proposed ordinance." Thus far, Tovo's amendments would include lowering the percentage cap, using a smaller area of measure than a ZIP code to determine that cap, and allowing neighborhood planning areas to opt in to having CSTRs through the neighborhood planning process. Tovo's main concern, she says, is STR "clustering," and the impact it could have on neighborhood school enrollment. She believes using school attendance zones (rather than ZIP codes) as boundaries for STR limits would not only make regulation more manageable but also give the city better information about the impact of CSTRs. She's requested an educational impact statement from staff.

"Let's look at attendance zones and ask how 3% of the housing stock would affect that," Tovo says. "Three percent could end up in one attendance zone and really impact a school by driving down enrollment. Travis Heights and Zilker elementaries are the most at-risk for clustering, but there also may be trouble in East Austin, where there are already enrollment problems. If we include those amendments, I believe we'll end up with a much more reasonable ordinance."

Morrison has requested an economic impact statement and is also waiting to hear from the Community Development Com­mission concerning the impact short-term rentals could have on affordable housing; that commission got a briefing on the matter Tuesday night, July 10. The city's Neigh­borhood Housing and Com­mun­ity Develop­ment office issued a May 18 Affordability Impact Statement stating that the proposed STR ordinance would have no impact on the production of affordable housing, but Morrison says that doesn't consider the effect of housing prices rising as a result of homes being purchased for use as commercial STRs. "The statement doesn't take into account the cost of affordable housing," she says. "There are a whole lot of improvements that need to be made. The issue is still evolving."

One other improvement Morrison believes should be addressed before the Riley plan is reconsidered by council is requiring all CSTRs to comply with the Americans With Disabilities Act. "Commer­cial short-term rentals are public accommodations, so ADA licensing and certification should be required," she says. However, Senior Planner Robert Heil, the staff point man on the STR issue, says requiring ADA compliance would require a lot more than just council approving a single ordinance.

"STRs are not regulated as hotels," Heil says. "They're single-family residences leased out for a short time, and single-family homes are not required to be compliant with ADA. If council were to do something very different and decide that short-term leases should be considered commercial uses, there would be many additional issues brought into play, such as zoning and land use. Redefining individual homes as commercial properties would open up a lot of issues."