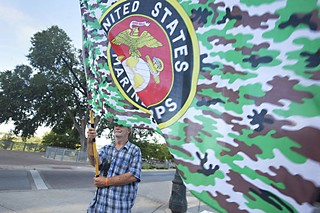 Larry Singleton shows his colors at a July 7 parade and job fair for Iraq veterans as part of an event organized by a volunteer from the Welcome Home Iraq Veterans Committee and co-sponsored by the city. (Photo by Jana Birchum)

› City Council is taking its annual July break, but Mayor Lee Leffingwell, City Manager Marc Ott, and several city staff members just returned from a visit to a Formula One race in Silver-stone, England – described as a "junket" by critics – where they hoped to anticipate and avoid problems for the November race in Austin.

› Travis County Commissioners Court voted to adopt the city of Austin's revised limits on tax exemptions for historic homes – $2,500 for homes designated this year. The commissioners also raised the disabled and elderly homeowners exemption, a move estimated to cost the county roughly $1 million.

› Amado Pardo, the alleged ringleader of a large heroin-trafficking operation and face of Jovita's restaurant, as well as his brother, Jose, were denied bond by federal Magistrate Judge Mark Lane at a hearing Tuesday. See "Jovita's Defendant Not a Dealer, Lawyer Says."

› Two children, ages 5 and 7, died Tuesday in a fire that started in a car and moved into their Southeast Austin home. A second fire in East Austin left an elderly woman dead and two others with severe burns.

› Texas is running out of fresh water, but the state is considering using underground brackish water reserves for drinking. Land Commissioner Jerry Patterson proposes tapping the Perma­nent School Fund to pay for a desalination test project in New Braunfels.

› The UT System Board of Trustees is considering paying $6 million for the broadcast license for KXBT-FM and splitting KUT into a news station and a music station.

› Austin Police are asking for help solving the Monday morning murder of Alejandro Her­nan­dez Jr., found shot and slumped over the steering wheel of his pickup truck in North Austin. Tip­sters can call homicide detectives at 477-3588.

› Accused of failing to protect customer data, local think tank Stratfor will spend $1.75 million to settle a class action lawsuit after its servers were hacked and embarrassing emails were published by WikiLeaks.

› Texas' controversial voter ID bill finally made it to court on July 9, with U.S. Attorney General Eric Holder slamming it as a poll tax.

› U.S. District Judge Sam Sparks has rejected a bid by Lance Armstrong to block the U.S. Anti-Doping Agency from going forward with charges that he doped throughout most of his career.

› The Texas Department of Criminal Justice announced it would begin using only a single drug, pentobarbitol, to carry out executions, after the supply ended for another drug in its current three-drug mix. See "Death Watch."