The Dead Walk by Night 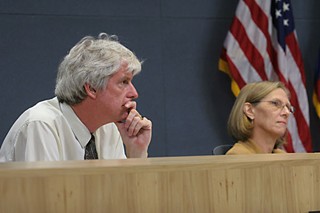 Bill Spelman and Laura Morrison cast the dissenting votes on the purchase of a new $3.7 million helicopter for the Austin Police Department. (Photo by Jana Birchum)

Last week's marathon City Council meeting didn't end with the debate and decisions concerning single-member districts, which concluded at the relatively civilized hour of 12:30 Friday morning. A visibly exhausted council and a handful of designated staff members kept at it until long after the bars closed, ending officially at 3:47am when city planner Jerry Rusthoven concluded a rapid-fire four-minute briefing (originally scheduled for 2pm the previous afternoon) on four Planned Unit Developments in different neighborhoods (agenda Items 132-135). The only interruption was from bleary-eyed Council Member Mike Mar­tin­ez, who acknowledged the time but made a point of noting that such pro-forma briefings "cannot become routine practice as it relates to PUDs."

Rusthoven concurred, and marched on.

Council took no action on those briefings, but the moment exemplified the time-crunch of the June 28 meeting, some 143 items and 18 hours in length – even though quite a number of that gross total had been postponed to another day. More than one observer has noted that marathon public meetings do not necessarily make for wise public policy – but "transparency" is the watchword of our times.

The headline debate Thursday was indeed over districting: about three hours' worth of thrusts and counterthrusts that didn't actually begin until about 9:30pm Thursday (for that report, see "Geopolitical Fault Lines" and "Council Math: 1+1=?"). But there was plenty of time before and after that semi-climax for other disputatious matters.

• Items 44 & 45: a proposed $3.7 million authorization for the purchase of a new helicopter, for police use and public safety more generally. Council was willing to concede the need for a third helicopter to supplement the two aged copters already in irregular service, but questioned why this request was being made outside the normal budget cycle, especially when it will take 14-18 months to actually acquire the vehicle. "We need to get in line now," responded Austin Police Chief Art Acevedo, arguing that firefighting, emergency services, and crime apprehension all need expanded flight hours with much newer equipment. After much discussion – salted by Acevedo with specters of imminent disasters – the vote was 5-2 (Bill Spelman and Laura Mor­rison dissenting) to move forward with the negotiations; actual purchase approval will return to council (for inevitable approval) presumably sometime next year.

• Item 22: a proposed $5.4 million Austin Energy contract with Lambda Construction for an electric substation, an arrangement heavily criticized by minority contractors for not meeting city diversity standards on subcontracting. Council got a public earful from Carol Hadnot of the Minority Con­tract­ors Trade Alliance charging that the "apparent low bidder" (i.e., Lambda), unlike the rejected bidders, had made no serious effort to meet the city's diversity goals. That judgment, Martinez suggested, was apparently echoed in executive session, and he moved to reject all bids. Without discussion, the motion passed 4-2, Mayor Lee Lef­fing­well and Kathie Tovo dissenting. It will take a little longer to build that substation.

• Item 42: The vexed question of short-term rentals was up for second and third readings – the proposed ordinance would allow commercial STRs but limit their number in any particular neighborhood. Oppon­ents – on the dais, primarily Morrison and Tovo – are still hoping to reopen the public hearing and somehow derail commercial STRs altogether. Short of that, both members promised to propose numerous amendments, and that daunting prospect on this crowded agenda led Tovo to move for a postponement, which passed 6-1 (Spelman dissenting). Come Aug. 2, the dire vision of hordes of unregulated party houses will rise like The Walking Dead.

• Item 73 marked the curious demise of the Convention Center relationship with the Aramark caterers, which had run afoul of incomplete financial information (according to city auditors) and controversial public buzz surrounding the arrangement, casting a cloud over the 10-year renewal of Ara­mark's contract. Company representatives delivered a spirited defense of Ara­mark's financial practices – to no avail. Spel­man moved and Mayor Pro Tem Sheryl Cole seconded an award of the contract to a competing bidder, and it passed, with little discussion, 5-1.

The evening's highest profile rejection was even more perfunctory – council sniffed, and didn't care for the odor of, the Aviation Department's proposal to build a $5.4 million "temporary" international airport terminal, initially to accommodate foreign travelers to the upcoming Formula One race this fall. Austin-Bergstrom International Airport Operations and Security Director Patti Edwards argued 1) that the terminal was part of the airport's long-term plan for increasing international flights that this project would kick-start, and 2) that the money for the single-source contract was not (strictly speaking) "taxpayer money," as the funds would come from dedicated airport income. A couple of dozen citizens had signed up to speak against the project, but they didn't need to do so, as it quickly became clear that an audible council majority considered the hurry-up, no-bid proposal premature, ill-considered, and too expensive. Spelman and Morrison moved to disapprove, and the rejection was unanimous.

There was, of course, more. Along about 3:20am, the Domain finally won its beleaguered argument to move an acre of "zero impervious cover" from one piece of ground to another. Pushing on another half-hour, the similarly embattled changes in zoning conditions for the planned Congress Avenue Marriott hotel passed 7-0, following an impassioned but not entirely comprehensible objection from Cynthia Perez of the legendary Las Manitas cafe, displaced by the hotel project.

On the matter at hand, it was frankly not quite clear what Perez was asking the council to do. But her larger perspective was resonant. "Please allow Austin to live," she said, "because we're the ones who made it a great place." Had anyone so moved, that too would have received a unanimous vote.