Under both the proposed 10-1 and 8-2-1 districting plans for City Council, the city would be divided into districts from which most or all council members would be elected. No specific map has yet been proposed, nor has the districting process yet been determined. With a bit of ironic foresight, it’s possible to speculate on what 10 council districts might turn out to be.

Austin City Council inauguration ceremonies don't generally include political speeches. Newly elected or re-elected council members, flush with the good will and generosity of spirit that only seems to mark the human character after a victory, generally set aside ideology for an hour and reserve their short remarks for thanking campaign staffs, recognizing family members, and listing a few boilerplate issues they look forward to tackling during their terms – say, poverty, or the environment. Otherwise, it's all pomp and circumstance: Invocations are delivered, oaths are taken, bagpipes blare, the national anthem is sung, and everyone retreats to the lobby for cookies and lemonade.

So it came as something of a surprise at last week's swearing-in ceremony that Mayor Lee Leffingwell took the occasion not only to declare his plan for a hybrid geographic representation system, but also to criticize the single-member plan favored by at least two of his council colleagues. Foregoing the ceremonial niceties, Leffing­well described his plan as "much-needed reform" while decrying the 10-1 plan proposed by Mike Martinez and Sheryl Cole as "worse than the exclusively at-large system we have today."

Maybe it wasn't such a surprise. After all, when you're trying to change the way your city conducts the business of electing its leaders, things are bound to get a little testy. As members headed into their meeting last Thursday (their last before the annual monthlong recess), the issue of geographic representation had reached not only a fever pitch of council and civilian discontent but also what Council Member Bill Spelman once called the level of "maximum feasible misunderstanding." Two competing plans for dividing up the city electorally were on the agenda, competing for a place on the November charter revision ballot (along with numerous adjunct provisions that would move council elections to Novem­ber, extend council terms to four years, stagger those terms every two years, etc.). There was also a third plan, supported and signed by some 30,000 private citizens, hanging ominously over the proceedings, a reminder of the mess to come once that day's mess had been sorted out.

By the end of Thursday's meeting, a messy situation had grown into a completely different kind of municipal beast. Martinez changed his proposal at the last minute to mirror plan No. 3 ("the people's plan"), three members voted to put both Martinez's and Leffingwell's proposals on the November ballot (leaving it to the voters to slug it out), and one member voted to leave both plans for geographic representation off the ballot entirely in the name of ... getting geographic representation on the ballot (see "Council Math: 1 + 1 = ?").

If You're Black, Stay Back

Austin's current at-large council system was conceived in racism. During most of the first half of the 20th century, the city had a single-ballot plurality system, under which the top five vote-getters on a single ballot became council members. There were no places and no run-offs, and council members served the entire city. But in 1951, Austin NAACP's then-President Arthur DeWitty finished sixth in the City Council race, just barely missing the coveted fifth place. That potential outcome scared the hell out of the white business establishment, which promptly drew up a charter revision that would abolish the single-ballot system and replace it with a system of designated places requiring 50% of the vote plus one to win – a majority no black candidate in the Fifties in Texas could ever hope to achieve. That charter revision, stoked by racist sentiment in the press, was enacted in 1953.

It would be 14 years before another black person even ran for council. Since 1973, advocates have tried to change the Austin electoral system into some kind of geographic representation six times – arguing that it would increase minority representation, voter participation, and general electoral fairness – and six times they've failed. And if they're not careful (indeed, perhaps even if they are), they're going to fail again.

If nothing else, single-member advocacy makes for strange bedfellows.

Take Austinites for Geographic Repre­sent­a­tion, the grassroots group that has become the flag-bearer of the 10-1 single-member plan. AGR's 10-1 single-member plan, which was born in response to the now-disbanded 2012 Charter Revision Com­mittee appointed by council last year, has been endorsed by one of the strangest coalitions the city has ever seen. It takes nothing short of a miracle to get the Austin Police Association and Texans for Account­able Government (a group that spends much of its time and energy protesting against what it considers Austin Police Department abuses) to see eye-to-eye on anything. Yet there they are, on the AGR's endorsement page, kept apart only by the conspiracy of alphabetical order. The police association and the NAACP? That pairing is on there too. The Travis County Republican Party and the South Austin Democrats? Busy beating swords into plowshares together.

AGR spokeswoman Jessica Ellison says longtime frustration with the at-large system, coupled with the populist virtues of the 10-1 plan – under which the council would be made up of 10 district representatives and one at-large mayor – have generated this odd coalition. "We believe the 10-1 plan is the plan the people want, not the plan special interests want," she says. "The Charter Revision [Committee] voted in favor of the 10-1 plan, and we support it because it's the only plan that actually puts the power in the citizens' hands. In a single-member system, council members will be held accountable by their constituents."

As if to amplify the "people-first" spirit of the 10-1 plan, AGR members have been collecting signatures since March on a petition to get the plan on the ballot this November as a charter amendment. Under city law, in order to qualify for the ballot, all petitions must have at least 20,000 valid signatures. Last Thursday, coinciding with the scheduled City Council public hearing, AGR representatives delivered seven boxes' worth of signatures to City Hall, for eventual counting and validation by staff – if they decide the council version of their proposal is insufficient.

That's one way to get a plan on the ballot. The other way is to get the support of council members themselves. You may need the names of 20,000 voters with a petition, but it only takes four council members. That's the approach taken by the newly formed Austin Com­mun­ity for Change.

AC4C also spun off indirectly from the CRC, but it represents the other side of that group's 8-7 vote, the side that endorsed geographic districts tempered by some at-large representation. (Disclosure: Susan Moffat, spouse of Chronicle Publisher Nick Barbaro, is a founding member of AC4C.) Under the plan the group is advocating (and which Leffingwell and council members Morrison, Riley, and Tovo supported at last Thursday's meeting), council would be made up of eight district representatives, two at-large members, and one at-large mayor. Their arguments in favor of the 8-2-1 plan are essentially twofold. On the one hand, they say their plan will lead to more fairness, particularly for minority constituencies – including Asian-Americans, African-Americans, and the GLBT community – that are geographically dispersed and therefore may not benefit from a strictly single-member system. (Representatives of the Asian-American community, in particular, pressed that case on and off the CRC.) Moreover, they say, a hybrid plan will lead to more choices for voters, as citizens will be able to vote for four council members under the 8-2-1 plan, but only two under 10-1. 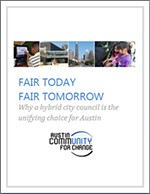 Point Austin: One More Time
On the seventh try, can we change city government?