John Duffy (r), the closest Occupy Austin has come to a single public face, kicks off his City Council campaign at the HighBall in March. One of six candidates challenging Place 5 incumbent Bill Spelman, he won 6% of the vote. (Photo by John Anderson)

"ONE, we are the people!

TWO, we are united!

THREE, the Occupation just got started!"

– Occupy Austin chant on the plaza of City Hall on Feb. 3, as Austin police moved to evict the remaining Occupiers 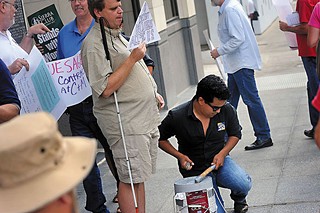 Dave Cortez beats a bucket-drum outside Blue Sage Capital, which his group and union reps claim is tied to union-busting activities. (Photo by John Anderson)

Occupy Austin is planning a Fourth of July rally on the state Capitol grounds to compose a list of grievances and hold a series of teach-ins and marches. This is the first locally organized effort to collectively answer the question, "What do y'all want?" since the 99 percenters were evicted from Austin's City Hall steps in early February.

Hecklers and academics aside, no one is more concerned with the future of the Occupy Austin than its own participants. For the moment, fundamental questions about organizational process and personal identity preoccupy many of its most active participants, who eschew structure and are deeply suspicious of the very nature of politics. What is complicated enough; how seems nearly unattainable.

"It's not even obvious what Occupy is," says Austin Occupy activist John Duffy, 30. "There's internal debate regularly about, overall, what it is. The people who happened to show up to take action in that physical space developed relationships – some positive, some negative – and now with the physical space removed, I think that's left people who've formed solid bonds and fell into affinity groups." Duffy is the closest Occupy Austin has come, so far, to a single public face. He ran for City Council this past May – one of six candidates challenging Place 5 incumbent Bill Spelman – and won 6% of the vote. Duffy admits that he ran on a lark and that he never expected to win; therefore he didn't work out a platform to run on. He's mostly concerned with environmental issues and says his dream is to live away from people in the woods with his girlfriend.

The Occupation on the steps of City Hall lasted about four months until demonstrators were evicted February 3. It has since splintered into at least a half-dozen causes, but welcomes public participation at all its events. It still meets regularly on City Hall's steps but goes home to sleep.

Seattle-based Betsy Dillner of the Alliance for a Just Society leads a workshop in early June to train activists in organizing a successful divestment campaign. (Photo by John Anderson)

In one sense, Occupy increasingly has become the group you get in touch with if you want to create a spectacle, infuse some gusto into a protest, or annoy the hell out of the cops. But actually accomplish something? That's up for debate.

One of Occupy Austin's goal-oriented efforts is the Bank Action Working Group, which supports divesting the city's money from large commercial banks and moving it to local credit unions. Credit unions (at least in principle) are controlled by members. The group perceives big commercial banks as being concerned with profit alone at the expense of the homeowners they continue to foreclose upon in the aftermath of the housing bust.

The bank action group successfully lobbied Council Member Laura Morrison to introduce a measure, passed unanimously in February, instructing city staff to investigate moving city accounts to local credit unions, or at least local banks. The city manager responded with an analysis stating that existing legal and fiduciary requirements would make such a move impossible. For example, the sheer size of the city's banking needs would easily exceed local banks' ability to maintain sufficient capital in reserve; subsequently council approved staff's proposal to place its accounts with JP Morgan Chase – the only bank that had responded to the city's request for proposals.

Nevertheless, municipalities in other states are exploring ways to withdraw money from the large banks that many voters associate with foreclosures and taxpayer bailouts. For example, Occupy Buffalo (New York) last month helped to persuade that city's comptroller to transfer $45 million in city funds from JP Morgan into a locally owned bank. Similar proposals are getting attention in Los Angeles, Kansas City, Seattle, and other Pacific Northwest cities such as Eugene and Portland, Ore.

The question of where the city of Austin does its banking will come up again in three years after the newly approved contract ends. By then, Occupy says it will be ready with better researched and actionable demands. The group would like to see the development of an ethical standard to determine what banks are eligible to work with the city – similar to the method by which the city increasingly applies labor and hiring standards to major companies seeking to build facilities in Austin in exchange for tax incentives. For now, the Bank Action Work­ing Group wants to focus on educating itself and the public about the practices of the big Wall Street banks.

Paco Cortez (with sign) is confronted by Travis County law enforcement during a protest of a foreclosure auction. (Photo by John Anderson)

Dave Cortez, 28, works prominently within the bank action group. Cortez himself is a professional organizer and works for the BlueGreen Alliance, a coalition of unions and environmental groups, including the Sierra Club. Last fall, at the height of the Occupy movement, Cortez helped organize a march on Bank of America Downtown. His group approached account holders as they walked out of the bank on Congress Avenue – they claim they encouraged locals to transfer $72,000 out of the bank that day to credit unions.