On the seventh try, can we change city government? 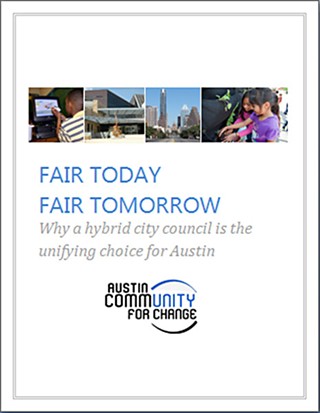 I was at home on Sunday night, minding my own business, when I was surveyed by phone on my opinions on geographic districts for Austin City Council members. (And you think you lead an exciting life.) I don't know who sponsored or performed the computerized survey, but it seemed fairly thorough and straightforward – not obviously a push-poll – with a series of "If ... then" questions designed to elicit my general opinion on districting and how likely I would be to vote on the currently competing plans (pure districting or "10-1" vs. a "hybrid" plan with some at-large seats). In that spirit, I answered the questions as best as I could – yet as a result, I'm not sure the surveyors (if they did have a partisan interest) got their money's worth.

Following the various proposed scenarios – the advantages of at-large representation of the whole city, the empowerment of neighborhoods under districting, the ability to vote for more than one rep under a mixed system, the presumed broader citizen engagement under districting – I'm pretty sure I came down very firmly on both sides. Pushing the requisite buttons, depending on the question, at one point or another I endorsed both the all-district and hybrid systems. I don't know if that makes me an ideal poll subject or just another Austin voter who can't make up his mind.

For the sake of argument, I'll claim the latter – and I suspect many of my neighbors will be in the same boat come November, when it looks increasingly likely that both options will be on the ballot: a 10-1 scenario generated by public petition, and a hybrid system proposed by the City Council. Matters may come to a head today (Thursday), as Council is set to consider both an 8-2-1 system proposed by Mayor Lee Leffingwell and Chris Riley, and a 10-1 proposal sponsored by Mike Martinez and Sheryl Cole.

The council chewed on the matter at length during its Tuesday work session, without moving toward any obvious conclusion. Indeed, based on scheduling questions to staff, it seemed likely they would leave a ballot resolution hanging until August, with just enough time to get the wording right for early voting. That's no small issue, since there are several other election reform proposals pending – moving elections from May to November, tighter campaign finance regulation, and so on – and it takes time to make certain the ballot language is accurate and legal.

Four members, a de facto majority – Lef­fing­well, Riley, Morrison, and Tovo – appear to be leaning toward a hybrid, although they may differ on details. That leaves Bill Spelman not showing his cards, suggesting only that his vote will depend on whether the petitioners led by Austinites for Geographic Representation – a very motley crew – succeed in gathering sufficient signatures. Martinez says he will withdraw his own 10-1 plan if AGR does so, arguing that should 25,000 to 30,000 citizens sign on to 10-1, it's only right to give them a shot on the ballot.

But the AGR plan is accompanied by a strenuously complicated plan (derived from California state law) for an independent districting commission, some of which is legally dubious and all of which mocks the notion that petition signers had time to seriously review what they were signing. (Legislation by petition is a subject for another day – suffice to say that compared to even poor representative government, it's a farce.) Crammed chockablock into the charter, it would be a difficult to revise legal and political minefield, and it weighs down the AGR plan like a lawyer's dead case file.

More to the immediate point, it will give voters otherwise willing to give 10-1 a try a major reason to think twice – and one more roadblock to Austin's perennial search for more equitable representation.

Been There, Undone That

There are virtues and flaws to both proposed systems, but if, as seems likely, both land on the ballot, it will be much more difficult to pass either one. As is inevitable, positions are hardening – at his inauguration this week, the mayor described 10-1 as going "from bad to worse" and plenty of the 10-1 supporters have long since staked out an all-or-nothing absolutism. This week a new group surfaced, founded by members the Char­ter Revision Committee, and calling itself Austin Community for Change – they've issued a report defending a hybrid as a "unifying choice," both more flexible and better for minority groups not geographically concentrated.

Maybe so. They've come to the party late, although they reflect the fact that the CRC itself was split down the middle between 10-1 hardliners (anchored by His­panics understandably impatient at underrepresentation) and those looking for a variation that 1) might provide broader representation and 2) stands a better chance of actually being passed by the voters. It's hard to forget those six earlier attempts at getting this done, going back to the early Seventies, every one of which went down in defeat.

Well, here we are again. Want to place any bets?