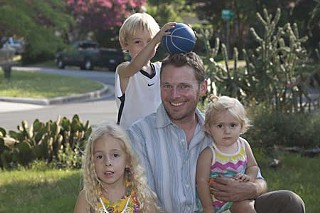 Four times a year, Sheila Fabrizio travels to Austin from her home in Allentown, Penn­sylvania, with her 20-year-old son, Derek Strunk. Derek is nonverbal and has autism, and his mother brings him to Aus­tin for weeklong, one-on-one communication therapy sessions at Helping Autism Through Learning and Outreach, a nonprofit started by Soma Mukhopadh­yay to spread the gospel of her Rapid Prompt­ing Method. Proponents of Rapid Prompt­ing say it enhances the learning and communication performance of people with autism, and Sheila Fabrizio says the sessions have "made my son's life better."

While Derek gets treatment, she and her son stay for a week in a short-term rental home on Mt. Bonnell Road. STRs have been a godsend, she says, because hotels are both cost-prohibitive and impossible for her son to stay in; Derek needs to be moving constantly. She's worried that the attempts by some to rid the city of so-called "commercial" – non-owner-occupied – STRs in residential neighborhoods will mean she and other "outsiders" will be "shut out" of Austin, making it harder, perhaps impossible, for her to improve her son's quality of life.

Austin­ite Andrew Elder, meanwhile, is president of the Zilker Neighborhood Assoc­i­a­tion and father to a 5-year-old girl, Ani, who suffers from Prader-Willi syndrome and who, like Derek, is on the autism spectrum. Ani started going to Zilker Elementary School at age 3 as part of the Preschool Program for Children With Dis­abilities. Under that program, Elder says, she's blossomed, so much so that she'll be matriculating into kindergarten with her peers next year. But Elder is worried that if something isn't done to curb the number of STRs in his neighborhood, the number of families with children in 78704 will continue to decline and its schools, already underenrolled, will be shut down. School closure, he says, would be a "supreme hardship" for his daughter and his family.

So, when short-term rentals have the power to both bring comfort to the families of sick kids and cause them severe hardship, how is a City Council member to vote?

"That was one of the worst decisions this council has ever made."

Council Member Laura Morrison is sitting in her office at City Hall. It's Tuesday, five days after City Council approved on first reading a proposal that would give the official OK to short-term rentals. Morrison had presented her own substitute motion that would have made non-owner-occupied STRs illegal, but it was rejected, 5-2. Instead, council approved Council Member Chris Riley's plan, which would allow non-owner-occupied STRs in areas zoned residential, with a cap (proposed at 3%) on the number of those properties in any particular ZIP code.

In Morrison's view, allowing non-owner-occupied STRs in residential areas would be an unprecedented shift in the way the city regards its residential neighborhoods. Non-owner-occupied STRs are no different than hotels, she says; their increased presence in single-family neighborhoods will reduce the housing stock available for permanent residents, drive up prices, and drive out families, in turn driving down enrollment at schools that are already facing potential closure.

"It comes down to people having a vested interest, being anchors, caring about schools and libraries, being 'the people next door': These things make up a neighborhood," Morrison says. "I started out thinking like Council Member Riley does, that we should find a limit for the number of non-owner-occupied STRs, and that would be a good compromise. But when I started thinking about why we separate single-family neighborhoods from other zoning categories, why we think it's important, then I realized you need people living there, not just people passing through."

Up to this point, STRs have been essentially unregulated, even uncounted. A recent report published by the City Auditor's Office determined that there are approximately 1,500 short-term rentals in the city. Of those, there is owner information available for 900, 563 of which are owner-occupied and 337 of which aren't. By state law, the owners of these properties – defined by the city as any single-family home that is rented for less than 30 days at a time – must pay hotel occupancy taxes, but studies have shown that few of them do, especially owners who rent out their homes only for specific occasions, like South by Southwest or the Austin City Limits Music Festival. Locals willing to rent out a room or an entire house during those peak times can make hundreds, even thousands, of dollars a night. By law, they are required to pay 15% of that in hotel taxes: 6% to the state, 9% to the city. Under city code, 15% of HOT revenue goes to the Cultural Arts Fund, which last year distributed money to hundreds of groups, including Arthouse at the Jones Center, the Austin Film Festival, Mexic-Arte Museum, and the Texas Juggling Society (which, we presume, spends its $1,000 in annual grant money on chainsaws, flaming bowling pins, and insurance). Supporters say that if STRs are restricted (or banned outright), millions of dollars in tax revenue will be lost. Bob Easter, a founding member of the STR owner organization the Austin Rental Alliance, guesses that the city lost between $5 million and $10 million in unpaid HOT revenue last year because it does not systematically verify that STR owners are paying their taxes. Rather than getting rid of STRs, ARA wants the city to get them all registered.

Registration appears to be the only policy proposal on which the opposing sides agree. As the issue has heated up, so has the rhetoric, with STR supporters accusing opponents of xenophobia and some STR opponents engaging in it. In the April 2011 edition of the Allandale Neighbor, Rob Robin­son, a member of the Allandale Short Term Rental Committee, wrote that the committee had come to the conclusion that STRs are a "significant problem in Allan­dale," both in terms of safety ("People living near STRs are subjected to a flow of strangers on their street and past their front doors, strangers about whom they know nothing") and the neighborhood's "sense of community" ("Renters of STRs will never be our friends, and we do not want them to be friends with our children"). ARA's Easter, meanwhile, thinks opponents are damaging Austin's welcoming reputation by trying to drive away longer-stay travelers. "Why wouldn't you want people coming to Aus­tin?" he asks.

One real problem with getting rid of STRs, or even just "commercial" STRs ("commercial" is a loaded term in the STR debate), might be not the damage to Austin's reputation as a "friendly city," nor even the lost HOT revenue, but the potential loss of cultural business – which would result in diminished sales tax revenue and retail activity. In letters sent recently to City Coun­cil members, Alamo Drafthouse and Fantastic Fest founder Tim League, Fun Fun Fun Fest and Transmission Entertain­ment partner James Moody, and film location managers John Crowley, Steve White, and Robbie Friedman wrote, "Short-term rentals are used by a variety of Austin businesses to house temporary employees and project-based workers. This is especially true for film, gaming, and other creative industries. ... The effort to effectively ban these types of rentals would harm our tax base, our residents, our businesses and our City." With Austin's once-thriving film industry already losing much of its business to neighboring states offering far more generous tax incentives, advocates are concerned that getting rid of non-owner-occupied STRs will give out-of-town film, TV, and video game productions one more reason to take their business to New Mexico or Louisiana.

In a December letter to council members from the Austin Film Society, Chris Jackson, production coordinator for the television show The Lying Game (one of the city's increasingly rare film-industry success stories) was quoted as saying: "We rely heavily on short-term rentals. We have approximately 15 short-term rentals at the moment." Sources say that number is expected to rise when the show returns later this summer to shoot its second season. In a similar letter sent to Council in April, Austin Gay & Lesbian International Film Festival Board President Kodi E. Sawin wrote that the festival "regularly [relies] on rental homes ... to host guests from out of town." Some in the film world worry that if STRs go away, their industry will take a hit, both to its finances and its reputation.