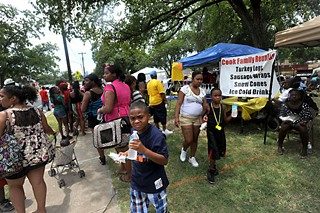 Austin celebrated Juneteenth on Tuesday with a parade, live music, food, and fun at Rosewood Park. (Photo by John Anderson)

› There's no City Council meeting this week, but the June 28 (presummer break) meeting is burgeoning with potential: the return of the argument over short-term rentals (see "There Goes the Neighborhood"); the meter still running on taxicab licenses; and the likelihood of dueling charter proposals over geographic council districts (see "Not a Short-Term Meeting").

› In answer to the international response to the April police shooting of a charging dog ("The Cisco Story: More Than Meets the Social Media Eye," April 27), the Austin Police Department announced new nonlethal methods and training for encounters with potentially dangerous dogs, plus full use-of-force review in fatal dog shootings.

› Austin Police say a preliminary review suggests officers pursuing alleged car thief Reynaldo Victor Hernandez Jr. did so within department policy. The June 15 high-speed chase in South Austin ended with the death of James Williford. Hernandez, who ran a red light and crashed into Williford's car, has been charged with murder. See "To Pursue ... or Not," Newsdesk, June 19.

› Carstarphen's campaign to push single-sex schools on East Austin revved up again this week, as the district held a June 20 invite-only meeting at Garcia Middle School to discuss its conversion into an all-girls school. Carstar­phen has also targeted Pearce Middle School to be converted into a boys' academy.

› After a year on the job, Lower Colorado River Authority General Manager Becky Motal has been given another three years by the LCRA board of directors. Motal's first task was to tighten LCRA's purse strings and "streamline" operations, resulting in layoffs.

› Williamson County U.S. Rep. John Carter has filed legislation to block the federal listing of four types of salamanders – Austin Blind, Salado, Jollyville Plateau, and Georgetown – as endangered, as they "are not threatened by reasonable economic development."

› GOP grandstanding on the Sage Brush Lizard continues, even after the Obama administration decided to leave it off the endangered species list. Land Commissioner Jerry Patterson and Comptroller Susan Combs have both demanded changes to the Endangered Species Act.

› On June 15, President Barack Obama announced that the administration would end the threat of deportation for some undocumented immigrants brought to the U.S. as children; the executive order would affect an estimated 800,000 people under 30 who arrived before the age of 16 and have lived in the U.S. for at least five years.

› There's still no ruling from the U.S. Supreme Court on the Affordable Care Act, aka Obamacare. The decision, which was expected earlier this month, could determine whether millions of Texans get to keep health coverage.