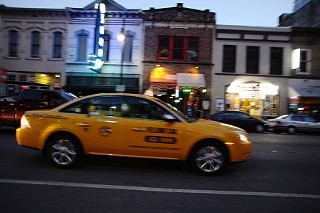 Taxis are back on the agenda for June 28. (Photo by Jana Birchum)

There's no regular City Council meeting this week, but the agenda is building for next Thursday, June 28 – the last meeting before council takes its annual summer hiatus. As of Wednesday morning, the most contentious issue on the hefty 146-item draft agenda is likely to be Item 44, the return of short-term rentals. As Josh Rosenblatt reports this week ("There Goes the Neighbor­hood"), council passed a new ordinance on June 14 to allow commercial STRs but require owners to register, limiting the numbers. But the measure passed only 5-2 on first reading, and the opponents show no signs of surrender – petitions are in the wind, websites and pressure groups are multiplying, and the chance of this item passing second and third readings on "consent" (as currently listed) is less than zero.

Similarly up next week is a third reading of the ordinances renewing the franchise of Lone Star Cab Co. and granting additional licenses to Yellow Cab Co. (Items 78 and 79 this week). The ordinances appear to be designed primarily to maintain the current proportions of licenses granted to the existing franchises, but partly because of complaints from disability advocates about inadequate or poor service, and partly due to objections from current drivers over dilution of their incomes, they haven't garnered a consensus to pass on all three readings. They're back on the consent agenda – but likely to be pulled for more public commentary.

Also looming (tentatively listed as Items 85 and 86) is the anticipated debate over single-member districting and the potential charter initiatives for the November election. In work sessions, Mayor Lee Leffing­well has floated a mixed or hybrid system, including both geographic districts and some at-large seats, while Council Member Mike Mar­tinez advocated for 10-1 (all geographic plus an at-large mayor). The Austin American-Statesman recently reported a majority of members leaning toward a hybrid; simultaneously, the advocacy group Austinites for Geographic Rep­resentation is collecting signatures for its own version of 10-1 that is accompanied by elaborate "independent commission" provisions for drafting the district lines. [As of Friday, four additional charter/election related Items (91-94) were added to the agenda; making them work in harmony on the ballot will not be easy, especially if voters get picky.]

Presuming council can come up with some kind of consensus for its own plan, the result is likely to be competing proposals on the fall ballot, weakening the chances of any plan to pass. Call it an Austin tradition, like the Trail of Lights: Every few years, we have an official proposal for geographic districts, and every few years, we vote it down.

Other Items of interest: Items 5 through 9, substantial Austin Energy incentives to Fuddruckers for the generation of solar power at five of its restaurants over the next 10 years; Item 78, council approval of+a $12 million loan to the Austin Children's Museum for a new two-story facility in the Mueller development. That just happens to coincide with a morning briefing updating the status of the entire Mueller development project (Item 100); the other morning report (Item 99) will cover the financial recommendations of the Austin Water joint subcommittee.

The agenda anticipates an early adjournment, shortly after a 5:30pm performance by Akina Adderley, and the proclamations.

Don't bet your dinner on it.

* Item numbers in bold reflect changes to the draft agenda after the print issue went to press Wednesday evening; the City Council meeting agendas can be consulted directly on the council web site.

+Correction: this description originally implied that the city was considering a loan to the Children's Museum; in fact, Council is to consider approval of a $12 million loan by a third party (Newark Cultural Education Facilities Finance Corporation) to the Austin Children's Museum, under "IRS and state law requirements," as pointed out to NewsDesk by city staff. We thank them for the clarification.