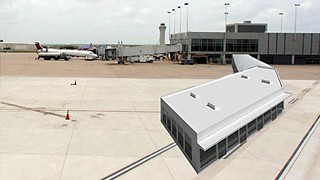 This is a rendering of a proposed temporary terminal at ABIA, which City Council is expected to consider on June 28.

Remember when Donald Rumsfeld mused about known unknowns vs. unknown unknowns? It seems Council Member Bill Spelman was thinking along similar lines on June 14 when City Council received a planning update for the upcoming Formula One race. "To my untutored eye, it looks like you've thought of everything," he told Economic Growth and Redevel­op­ment Services Office Deputy Director Rodney Gonzales, "but let me ask you the basic question: How is it that you know you've thought of everything?"

The answer was an exhaustive and broad presentation on every aspect of how the city will deal with the $400 million development at the Circuit of the Americas, the inaugural U.S. Grand Prix in Austin on Nov. 18, and the estimated 300,000 visitors it hopes to attract. Inevitably, transportation and disruption of residents both near the site and across Austin dominated the discussion. Travis County Commissioners recently approved $5.2 million in road upgrades around the track, but city staff said the plans are designed to minimize the number of cars on race day. There will only be 17,000 on-site parking spaces, and these are only being issued if the driver can guarantee four or more people with "personal seat licenses" per car. In total, 72,000 of the 120,000 ticket holders will be expected to use the courtesy shuttle buses, provided as part of their ticket price. City staff said this would have a dramatic impact on travel times: Early estimates suggested it could take 12 hours to clear the track after the race, but with new traffic management plans in place, Gonzalez said that should go down to two or three hours for cars, or 40-minutes (plus wait time) for shuttle passengers. Additionally, he said COTA "will utilize post-events to stagger departure from the race."

There were concerns that Austin-Bergstrom International Airport may not be ready to deal with the large number of out-of-state and foreign visitors. Council is now expecting a proposal on June 28 for a temporary international terminal to deal with charter flights. However, this may become a permanent facility within five years: There are ongoing discussions with airlines about when regularly scheduled intercontinental flights may be feasible, and Gonzales told council a route to London Heathrow could be viable within the next three years.