"If we had continued with the high growth rate that we had and the recession hadn't hit, we probably still would be sliding it off into a future year," Duncan continued. "But, the recession did hit."

Mayor Lee Leffingwell first got to council as the Place 1 representative in 2005. "Even then, looking out four or five years, the red flags were starting to come up," he said. "Of course, it takes a little time to set those wheels in motion."

The situation was further compounded by a troublesome existential fact. There are roughly 50,000 AE customers who live outside Austin's city limits. Those ratepayers cannot vote in city elections, and therefore have no say in the operations of the utility. However, out-of-towners have the right to appeal any rate increase to the PUC, whose members are appointed by the governor. Moreover, a handful of legislators perennially threaten to put Austin into Texas' deregulated energy zone, a move that would open the region to competition and effectively kill AE. So even as basic structural inadequacies persisted in AE's rates, it was easy to see why no one really wanted to tackle them. "As we know now, this takes quite a bit of political courage and effort to set this up, to do this," notes Weis.

Council Member Mike Martinez agreed: "Nobody that's an elected official ever wants to raise taxes or fees or rates on their constituents," he said.

But by 2009, it had become clear that something needed to change. For two years, the utility crunched numbers and ran through possibilities. AE staff unveiled their proposal at the final City Council meeting of 2011 – declaring that the utility needed $126 million in extra annual revenue. The new rate structure would feature a $22 monthly fixed fee for residential customers – to help take some of the volatile edge off bills that are dependent on energy sales – and a complicated rate structure that was designed to reward conservation with lower prices. The States­man reported that AE charges would rise by roughly 14% per household, or $16 a month.

That's when the shit hit the turbine.

Are You Talking to Me?

Nearly everyone found something offensive about Austin Energy's first pitch. As presented, Spelman, Cole, and Riley's plan formalized a much-discussed cut of more than $50 million from AE's initial stated annual revenue requirement. At a much leaner $71 million – a number that had been hollowed out by council members and utility officials over many months – that figure represents a compromise that still leaves the utility with uncomfortable fiscal gaps. Still the cuts aren't as bad as they could have been, or even as painful as the process that everyone went through in order to sort out the situation.

Council members responded to AE's initial proposal by scheduling work sessions to help them make a series of interrelated policy decisions that would, in turn, ultimately dictate the specifics of the rate increase. That plan also produced a cramped schedule that kept council members juggling AE, the city's budget, an election, and all of their regularly scheduled programming.

All council members say the result was worth the effort. But many had to skip at least a handful of the work sessions – Spelman found himself the chair at many meetings – and late in the process, members settled on a "decision-point list" that aimed to pull all of their work together. It was something that the Electric Utility Commission had figured out many months before council asked for it.

Some of this meandering was also a consequence of the cloud that hangs over a sizable chunk of the council and determines how members do business: the county attorney's ongoing investigation into possible open meetings violations. Martinez cited the attempt he'd made with colleagues Laura Morrison and Kathie Tovo to implement a shorter interim rate increase that might allow for more deliberations before a comprehensive solution would have been reached next year. "The minute that I began talking to ... Morrison and Tovo ... that really was it," he said. "The line of communications had been drawn because I had already spoken to two other council members about something I was contemplating proposing with them. So I couldn't engage – and didn't engage – with other council members."

And so it was that members found themselves scheduled for 11 AE work sessions in seven weeks. Despite the transparency benefits, there was no question that – under the old way of doing business – council members might have had their questions dispatched more efficiently. As fees for outside consultants mounted, as council was forced into a complicated process that simultaneously lent an air of over-simplicity to the proceedings, and as officials were forced out into the open – where, let's face it, one is often forced to be less-than-fully-revealing – a question lingered over the proceedings: Is it worth it?

Time was another important factor. The utility has said that its operations are currently running at a net loss each day. That pushes it to use more reserve funds. As the reserve funds are depleted, the chance of fiscal disaster in the face of an emergency – that hurricane or plant shutdown – multiplies. There is also the fact that a revenue increase visited in summer is (thanks to air conditioning and the like) going to produce more income than one begun in fall.

Heated setting? Certainly. Confusion abounding? Regularly. But nothing quite reached the absurdity brought by the arrival of Paul Chernick, the president of a consultancy called Resource Insight based just outside of Boston. He'd been brought on as an independent residential advocate – someone to look after the interests of low-income and residential AE ratepayers. Utility critics worried that, without the participation of such an adviser, those classes of ratepayers would be sent down the proverbial shaft in favor of larger or industrial customers.

Chernick got here late in two ways. Council members were swayed by community concerns over the adviser originally hired by AE to fill the residential advocate role earlier in the process, so they turned to outside help for the work sessions. In addition, Chernick had been the second choice for the role, hired only after the first choice had to beg off due to a family emergency. Chernick was said to be the choice of deeply skeptical utility critics who doubt AE's methods and worry that too much has been sacrificed by city residents. 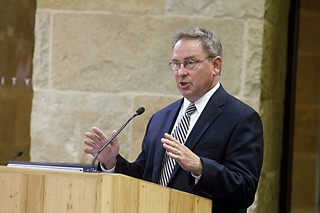 Chernick quickly proved an aggressive participant. As whispers circulated about his true knowledge of the Texas electric utility picture – matched by the flat public refutation of a handful of his suggestions by AE staff – Chernick repeatedly chiseled deep into utility staff members with brusque assertions that questioned their integrity, their intelligence, or both. In the middle of a discussion about a difficult section of the utility's finances, for example, Chernick proceeded to dismantle the utility's position with a dripping soliloquy that was punctuated with forceful inflections that seemed to question the abilities of staff present at the hearing. "This is something that I proved in a paper in 1980, and everybody has known for a long time," he said of one part of the argument. After one of his appearances before council, Chernick was overheard asking longtime local consumer advocate Paul Robbins if his approach was more along the lines of what Robbins had expected from a consumer advocate. It might have been, but it was also getting under the skin of some council members.