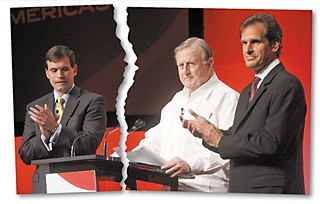 Before their relationship began to publicly unravel, (l-r) Tavo Hellmund, Red McCombs, and Bobby Epstein appeared together at an April 2011 press conference for the unveiling of the Circuit of the Americas name. (Photo by John Anderson)

It should be a time of jubilation for the team behind Austin's Formula One race. Last Sunday the Circuit of the Americas began ticket sales for the inaugural U.S. Grand Prix in Austin, and a big push starts this weekend for a two-day Formula Expo event at the Austin Convention Center. But one name will be absent from the festivities: Tavo Hellmund, the brain behind the project, who has accepted an out-of-court settlement to quit the company.

It's a tale as old as business itself: The one who dreams big often loses out to the money men. After months of rumors that Hellmund and his investors were at each other's throats, in March Hellmund finally sued his partners for $18 million. The sordid details were expected to be heard in Travis County District Court this week, but on June 8, Circuit of the Americas' Julie Loig­non, vice president of public and community relations, told the Chronicle via email that "a settlement agreement has been reached."

It all came down to a complex network of companies and what they brought to the table. First up was Full Throttle Productions LP: That's Hellmund's company, which signed the deal with F1. Then there was Prophet Track Partners and Prophet Ven­tures, two firms run by Austin financier Bobby Epstein. Aside from money, Epstein also controlled 647 acres of Southeast Travis County scheduled to become the Wandering Creek housing development, which instead became the core of the Circuit of the Amer­icas. And finally there was McCombs Motor Sports LLC, owned by Red McCombs. Not only did the automotive multimillionaire bring more cash to the table, but he also added political credibility to the project.

According to Hellmund's March 12 filing, he brought Epstein and McCombs on board by offering them 75% of his venture. In return for having them finance the track, Hellmund became a minority shareholder and was hired for 10 years as chairman of the FIA Formula 1 United States Grand Prix. And then, according to Hell­mund, everything came unglued. He claims his partners repeatedly failed to fulfill their financial commitments – endangering the project – and that they finally cut him out of the deal by negotiating a new and more demanding contract with F1. In his suit, Hellmund claimed that "Epstein/McCombs' gamesmanship (or lack of experience) destroyed significant benefits for the Company."

However, with the June 8 agreement, Hell­mund is out. That's a situation that many close to the project have described as unfortunate and tragic, especially since without him, there would be no F1 in Austin. It was his close relationship with F1 boss Bernie Ecclestone that opened negotiations. No F1, no Circuit – and it was a circuit that Hellmund helped design, demanding that it be a world-class track that would excite drivers and fans. No circuit, and none of the other race series lined up would have signed on the dotted line. It already looks like MotoGP may back out of its deal to start racing in Austin in 2013, since it was Hellmund – through his close friend and former world champion Kevin Schwantz – who signed it up. Now racing fans are wondering what else departed with the track's visionary.

From Contract to Litigation: A Timeline

May 25, 2010: Three years after the last U.S. Grand Prix, Formula One announces a 10-year deal with Tavo Hellmund's Full Throttle Productions LP to bring F1 to Austin in 2012.

Dec. 15: Partners sign agreement for Accelerator Holdings, including a division of shares and a 10-year, $500,000-a- year contract with Hellmund.

July 1: Circuit of the Amer­icas announces a deal with V8 Supercars.

Aug. 31: Amid concerns about construction timetables and summer heat, the race is rescheduled for Nov. 18, 2012.

Sept. 29: Hellmund agrees to be bought out by Epstein and McCombs for $18 million.

Oct. 25: As Hellmund, Epstein, and McCombs meet at in the London office of F1 supremo Bernie Eccle­stone, Hellmund has his personal belongings removed from the COTA offices. Meanwhile, a second American Grand Prix, to be held in New Jersey starting in 2013, is announced.

March 12, 2012: Hellmund sues Epstein and McCombs for breach of contract and demands to see the company books.