The design team has a few other ideas for this plot of land owned by the Statesman. (Photo by Jana Birchum)

An eight-member sustainable design assessment team released its preliminary recommendations for the Lady Bird Lake Special Waterfront Project last week. While their full report isn't expected until later this year, the early word emphasizes a pedestrian-friendly lakefront with an eye toward more housing and stronger transportation.

According to the team, some of the weak spots in the current scene include unfriendly streetscapes, limited access to the lake, and wasted land opportunities, but the proximity to Downtown and Austin's creative and diverse community intrigued them. Their biggest qualm was clear: "A Code is not a Vision," reads a line on the PowerPoint slide featuring the Waterfront Overlay District section of the Austin City Code.

In their vision, the area along the south shore would include a "sustainable solar farm," "dancing in the parking lots," a hotel on the Austin Ameri­can-Statesman's expansive plot of land, and a transportation system that includes streetcars, with Congress Avenue operating as that network's "spine."

A full written report is expected from the team later this year, but to learn more about the initial proposals – including the simple eight-step program to make it all a reality – you can read the team's 95-page PowerPoint presentation at www.austintexas.gov/Waterfront. Like what you see? Hate it? Submit your own ideas at the SpeakUpAustin! link on that same page. 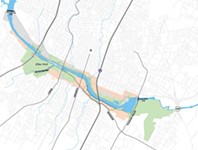 Developing Stories: Walking on Water
A roundup of Lady Bird Lake planning efforts that are all wet