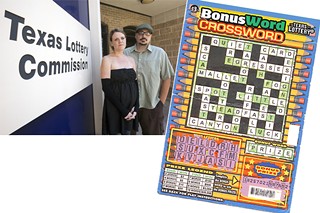 Carrie and Zachariah Kuenzi are accused of fraudulently trying to cash a Crossword ticket like this one for $100. (Photo by Jana Birchum)

Zachariah ("Riah") and Carrie Kuenzi were driving home from trivia night at the HighBall on Jan. 25, heading south on Manchaca Road, when they were stopped by an Austin Police Department officer; Carrie was speeding. The officer issued a citation, and the couple were back on their way. Or so they thought. They hadn't traveled much farther when the same officer flashed his lights, again pulling the couple over. After stopping the car, Carrie stuck her head out the open window, protesting in jest that she couldn't possibly have been speeding already. Indeed, she wasn't speeding; the officer made his way to the passenger side of the car and extracted Riah, taking him to the back of the police cruiser. Riah was being arrested on an outstanding warrant, the officer told Carrie. Neither of the Kuenzis had any idea what was going on. Carrie says the officer told her, "That's all I know, ma'am," when she implored him to tell her what the warrant was for. He paused, then added a bit of detail: "Could it maybe have anything to do with the Lottery?" he asked.

Carrie was stunned; she knew exactly what was happening – although she couldn't believe it. The Texas Lottery Commission had charged her husband with "claiming a lottery prize by fraud," a class A misdemeanor, punishable by up to a year in jail. But that wasn't all. When the couple went to court for Riah's first appearance on the fraud charge, they were informed that there was a warrant out for Carrie's arrest as well, also for lottery fraud.

According to the TLC, in March 2011 the Kuenzis defrauded the Lottery by attempting to cash in a $100 Bonus Word Crossword instant scratch-off ticket that the TLC says had already been claimed and paid in September 2010. The Kuenzis firmly deny the charge; how the previously paid ticket made it back into their possession, neither can say, but they insist that it was their ticket and that they don't recall cashing it in back in 2010.

The TLC – and the county attorney's office, which is prosecuting the case – appears unpersuaded by the Kuenzis' protestations, despite the fact that, according to investigative documents obtained by the Chronicle, the couple has maintained their innocence and believe that a simple mistake of some sort led to their legal predicament. Moreover, it does not appear that the TLC investigation turned up any evidence to prove otherwise. To Dawn Nettles, a watchdog of the Texas Lottery who publishes the online Texas Lotto Report and has made something of a career of being a thorn in the Lottery Commission's side, the prosecution of the Kuenzis is out of the norm for the TLC. She says the agency typically aims its fraud enforcement guns in a different direction, more often going after people trying to claim winning Lotto tickets that were stolen from their real owners. Still, she's not entirely surprised, because she believes the TLC has become increasingly determined to ferret out and make an example of players believed to be "Dumpster divers" – people who look for scratch-off tickets tossed in the garbage outside Lottery retail locations, tickets that have been cashed and disposed of without being destroyed per TLC regulations or those that a player tossed, thinking, for whatever reason, that a ticket was a loser when it in fact was a winner. In essence, Nettles believes that the TLC is making an example of the Kuenzis in an effort to discourage people from looking for discarded winning scratch-off tickets. Whether that's the case and why the TLC would devote public resources to such a seemingly minor episode remain open questions.

The Kuenzis' current legal woes started with a mundane trip to a convenience store to have a stack of scratch-off tickets scanned and to collect on the winners. The couple routinely played several popular Texas Lottery scratch-off games, including Crossword. The object of Crossword is to scratch off a series of letters and match them to letters on the playing card to form words; the more words matched, the greater the payout. It is one of the state's more complicated scratch-off games, leaving plenty of room for operator error – missed letters can lead a player to think a winning ticket is actually a loser. The Kuenzis know that firsthand. "We were playing often and throwing away [what we thought were] losing tickets," Riah says. The couple changed their routine, however, after taking in for cash-out what they thought was a $4 winner only to discover that it was actually a $50 winner. "We realized that we were missing details, because if you miss a letter it can change the game." From then on, the couple saved all their tickets, even those they believed to be losers, in order to have them scanned by a Lottery retailer, typically at either the Barton Food Mart on Spyglass Drive or the 1st Food Mart on South First Street.

In early 2011, the couple took a stack of accumulated tickets to the Barton Food Mart. "We found a couple losers, and we found a couple winners, and we cashed those in," recalls Riah. "And then came the one with the problem." After scanning several tickets, the clerk informed the couple that they had a $100 winner on one Bonus Word Crossword. But there was a problem: because the top of the ticket was torn off, where one of the ticket's bar codes was located, the retailer would not be able to give them their winnings. In order to collect, the Kuenzis were told, they would have to take the ticket to the Claim Center at TLC headquarters on East Sixth Street.

It wasn't until March 22, 2011, that the couple finally got around to doing so. "It was an inconvenience, so we didn't do it for a while," says Riah. The couple was asked to complete claim information on the reverse of the ticket as well as an additional form detailing information about where they believed they'd purchased the ticket and how long it had been in their possession. They were told that before the Lottery could pay out the winnings, the torn portion of the ticket would need reconstruction. The couple left, with the understanding that the Lottery would contact them when the reconstruction was complete.

That's not how things played out. Instead, when the couple was called back to Lottery HQ in mid-April, they were taken, individually, into a room with TLC investigator Steven Bilbo, who informed each of them that the ticket had previously been paid and that the TLC believed they were trying to commit fraud by presenting the ticket for a second payout. When Carrie left the room with Bilbo, she was crying, Riah recalls. "She said, 'They think we're committing fraud!'" Indeed, with Riah alone in the room, Bilbo tried to turn the screws. The couple had been married less than two years, so it's likely that Riah didn't know his wife that well, Riah remembers Bilbo telling him. "He wanted me to throw Carrie under the bus," he recalls. Bilbo told Riah that "I should just tell him how [Carrie's] committing fraud, and it would be all on her and I could go home." Riah wasn't having it: If the ticket had been cashed, then so be it. How they ended up with the ticket, the couple didn't know, but it was clearly just an "honest and innocent mistake." Riah recalls Bilbo finally relenting and telling him "not to worry about it and it didn't seem like anything."

The couple left, but continued for at least the next week, without success, to contact Bilbo to make sure things had been resolved; they never heard back, they say. Carrie's mother also got involved, calling the TLC and talking to Bilbo's supervisor. Carrie says her mother got the impression that the couple should just forget about the whole incident. Eventually, they did – at least until late January, when Riah was arrested and taken to jail on an outstanding warrant Bilbo filed back in September 2011, one of two he filed that month, charging each of the Kuenzis with defrauding the Lottery, even though they never did collect the $100.

Commission spokeswoman Kelly Cripe said she cannot comment specifically on the Kuenzis' case but said that the TLC takes seriously its job of detecting and charging Lottery fraudsters, who come in all shapes and sizes. There are those who rob convenience stores and steal rolls of tickets, those who try to pass off winning Lotto tickets as their own (sometimes by trying to remove the winner's signature from the ticket and signing their own name instead) and others who try to alter losing tickets to look like they're actually winners. According to TLC records, from 2005 to late February 2012, TLC investigators conducted 1,191 fraud investigations. Of those, just 285 were submitted for prosecution; 101 ended in a conviction.

That statewide record suggests either that there either isn't much fraud happening or else not much is being detected in an operation that in fiscal year 2011 alone saw sales of Lottery tickets top $3.8 billion. Indeed, this year, through the week ending May 19, players bought roughly $2.2 billion worth of scratch-off tickets and another $126 million in Lotto Texas tickets, with total sales coming in at roughly $3.1 billion – an increase of 9.2% over last year. In other words, games of chance are big business in Texas, which makes the allegations against the Kuenzis seem even more ridiculous – akin to counterfeiters trying to game the system by fabricating $1 bills. 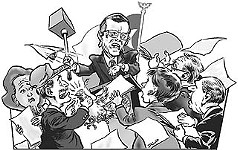