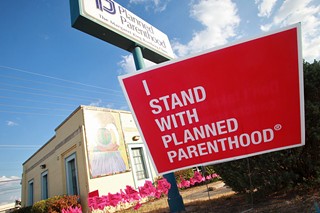 Planned Parenthood was the target of a Live Action report preceding the U.S. House vote on the Prenatal Nondescrimination Act. (Photo by Jana Birchum)

The Prenatal Nondiscrimination Act, or PRENDA, failed to pass the U.S. House last week despite the efforts of several anti-abortion groups. To coincide with the House vote, Live Action made what appeared to be a carefully timed release on May 30 of undercover video, taken inside the South Austin Planned Parenthood clinic, as part of its latest "investigative" report that purports to demonstrate that PP as an organization encourages sex-selective abortion – aborting a fetus because of its sex. The bill would outlaw the practice, sending doctors to prison for up to five years for performing a sex-selective abortion and requiring doctors and nurses to report women they suspect of aborting a fetus because of its sex. The vote was largely along partisan lines, though 20 Democrats did vote for the measure and seven Republicans voted against. While bill supporters in Congress and in the activist world, including Live Action founder Lila Rose, argue that the practice is widespread in the U.S. and represents the true "war on women," federal vital statistics show that the ratio of male-to-female births in the U.S. has remained fairly stable since 1940. (For more, see "The Real War on Women?," Newsdesk blog, May 30.)