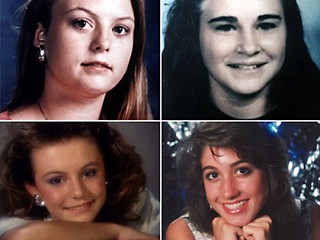 The 1991 case of the murders of these four girls in a North Austin yogurt shop has still not been solved.

The Public Safety Commission voted 5-0 (with Chair Michael Lauderdale abstaining) to pass a resolution recommending City Council earmark funds for outside reviews of certain major crime cases as yet unsolved by the Austin Police Department. The resolution also recommended that the yogurt shop murder case be the first one to be subject to such an external review.

APD Chief of Staff David Carter said he thought "having another perspective" on unsolved cases wouldn't be a bad thing, and he has "no disagreement with the resolution in general," but he declined to weigh in on whether the yogurt shop murder case could use a new set of eyes because the case is open and currently being worked by Cold Case Unit detectives.

Whether the ongoing investigation of the infamous 1991 quadruple murder has suffered from police groupthink or tunnel vision has been of concern to PSC Vice Chair Kim Rossmo, a retired police investigator-turned-professor whose research includes looking at failed police investigations. He has suggested that the evidence used to convict two men, Robert Springsteen and Michael Scott, of the murders was weak. That brought a nasty reaction at last month's meeting by retired APD Detective Paul John­son, whose work to reorganize the case in the mid-Nineties was key to the prosecution of these two men and the arrests of two others, Maurice Pierce and Forrest Welborn, who were never tried but who police believe were involved in the grisly murders. The convictions of Springsteen and Scott were overturned and the charges against them dismissed after an as-yet-unknown male DNA profile was found inside the youngest victim, 13-year-old Amy Ayers. During the PSC's May meeting, Johnson called Rossmo a liar for suggesting that the investigation was flawed and the evidence against the men was not persuasive. Rossmo was not at that meeting; on Monday afternoon he made a roughly 20-minute presentation to the commission in response to Johnson's comments, backing up his previous opinions regarding the case investigation. Indeed, Rossmo said that Johnson's calling him a liar simply for expressing a difference of opinion about the efficacy of the police investigation was in itself evidence that the department may suffer from confirmation bias – an insistence that the suspects it has already identified are the guilty parties despite the discovery of evidence that would seem to point away from their guilt. (For more, see "Scene of the Crime," Dec. 16, 2011.)

The resolution now moves to City Council for consideration.