Then There's This: Save the Trees! 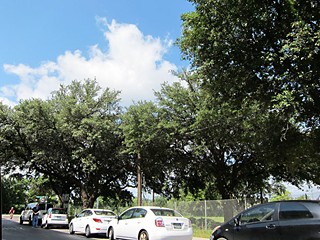 Will these trees at Cesar Chavez and San Antonio escape the axe? (Photo courtesy of Jan Child)

Leaders of the Austin Heritage Tree Foundation and other like-minded folks will hold a rally at noon Saturday at City Hall plaza to try to save seven healthy trees destined for the chopping block. This is a hastily put-together call to action, but organizers hope to draw a large enough crowd to help sway City Council to rescind its decision last week to grant the removal of the trees – six heritage and one protected – from the corner of Cesar Chavez and San Antonio streets.

After more than four hours of testimony from a cross-section of constituencies, a bleary-eyed council voted 7-0 to sell the remaining undeveloped piece of city-owned Downtown property to Trammell Crow. The vote came shortly before 2am, following a flurry of last-minute amendments to a master development agreement. The firm will pay the city $42.4 million over several years to transform the old site of the Green Water Treatment Plant into a $500 million development of housing, retail, and office space along Lady Bird Lake.

By allowing the trees' removal, the city effectively waived its Her­it­age Tree Ordin­ance, which the council strengthened two years ago. City staff says the ordinance doesn't apply to Trammell Crow because the council's vote to negotiate a deal occurred in 2008, two years before the amendments.

Still, Zoila Vega of the Heritage Tree Foundation points out that during the decommissioning of the treatment plant, the city clearly demonstrated its intent to save and protect the seven trees by fencing them off and installing irrigation for watering. "When you have high density, I do understand that it's difficult to yield the space to the trees, but it may be possible because we really haven't looked at the designs at all." Should the tree-saving effort fail, she says she would push to have most of them transplanted.

As part of the fledgling campaign, Austin­ites Camilla Freitag and Jan Child have created a Facebook page (www.facebook.com/austinheritagetrees) with a link to a petition to save the trees. (For the record, I signed the petition and encourage others to sign it, too.) If nothing else, the signatures will send a political message to council that the community is unhappy with its decision. Freitag says both Green and the nearby site of the old Seaholm electric utility plant hold sentimental value for her because her late grandfather Herff Chapman worked at Seaholm from 1936 to 1966. "Never have I met a person who loved trees as much as he did," she said. "He knew the names of all of them and taught us to appreciate nature."

Overall, the council decision on Green pleased some and dissatisfied others. The winners: Trammell Crow, contractors, and (surprise!) both the Workers Defense Project and low-income housing advocates – the latter had signed off on a deal before last week's council meeting, whereby 10% of the apartments will be designated for low-income renters for 40 years. If Trammell Crow decides instead to build for-sale condos, it will give $5 per square foot of condo space to the city's low-income housing fund. The losers: the Heritage Tree Ordin­ance and those who insist the city is giving up too much for too little.

Regardless, almost everyone agreed that the bright spot of the evening was the unshakable presence of the Workers Defense Project. Their organized effort produced a large turnout of laborers, families, and others demanding that council hold Trammell Crow to an enforceable agreement of job safety and living-wage requirements. "I think it was a really good show of how democracy can work," WDP's Gregorio Casar said later.

WDP credited Council Member Laura Mor­ri­son for taking the lead on brokering a compromise from the dais. As a result, Trammell Crow agreed to let WDP monitor the welfare of workers at the construction site every pay period and agreed to a goal of hiring 20% of construction workers from training programs and paying them $16 an hour. And while WDP had initially sought a minimum wage of $12, it settled on a prevailing wage to avoid cutting into the pay of high-skilled trade workers.

The eleventh-hour agreement was reached after a rapid round of back-and-forth between council, staff, Trammell Crow, and WDP – not the best way to manage a major land sale. "Given the hours of testimony, it is clear we have some work to do in ensuring these economic development deals incorporate our values," Morrison said. "We were able to gain some long-term on-site affordability and improve worker standards, but we also fell short of protecting the heritage trees." In the future, she added, "I'll be looking to set some better benchmarks to start with, so we don't have to do so much last-minute negotiation."

With workers' lives on the line, trees were not the focal point of the hearing. Neverthe­less, there was a fair amount of push to save most or all of the seven trees on the property. Brad Rockwell suggested adding height to the project to spare the trees. Mayor Lee Leffingwell countered that the height would violate the Capitol View Corridor, but Rock­well later produced a map that showed the Green site outside the corridor. The Water­front Ordinance could carry restrictions on that score, but, Rockwell said, "There is nothing to prevent the council from allowing whatever marginal changes in height that might be necessary to compensate for any losses in square footage" to accommodate the trees.

Council Member Kathie Tovo provided the final amendment to the deal, requiring the company to work with the city arborist on designing the project around the trees. "It's not very strong," Vega said afterward, "but it's better than nothing."

Then There's This: Out on a Limb
Bill would take an axe to local tree ordinances 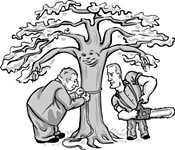