Education Austin President-Elect Ken Zari­fis called the process "just another chapter in the disregard for the community in Austin." To him, the low enrollment from the Allan, Martin, and the Eastside community was a clear sign that Eastside Memor­ial Vertical Team is rejecting the district's plan, and so the districtwide enrollment figure level "justifies [IDEA Allan's] existence. It doesn't address any of the inequities or the problems they were speaking of."

Zarifis is also concerned about the quality of teachers that IDEA will place on its Austin campuses. First, there is the long-running fear that IDEA is propped up by newly graduated college students on Teach for America placements, rather than qualified and experienced teachers. Second, that their hires will have no understanding of the real needs or history of the East Austin community. IDEA's leadership is in place, and three of the campus' four senior administrators are TFA alumni: Assistant Super­intendent of Instruction Reynaldo Flores, College Prep Principal Amanda Marquez, and Assistant Principal of Operations Ale­jan­dro Delgado. Of them, only Delgado is a native Austinite. None of them has taught at an Austin campus, and that is reflected in the staff they are hiring. As of May 16, IDEA had filled only 12 of the 37 teaching positions advertised for the fall, and only half of those hires are from AISD.

What has angered parents most is how freely IDEA and AISD have changed the rhetoric about what the in-district charter is supposed to do. For all the district's claims that there were open discussions about IDEA for over a year, parents feel they knew nothing until the deal was effectively signed and sealed. The concept of a deal with the charter group first came before the board in March 2011 (see "Which (East) Side Are You On?," June 24, 2011), but in the least transparent fashion possible: an extremely vague proposal for an "In-District Charter Collaboration," passed without debate or discussion as part of the consent agenda. As Richey noted, staff and parents were more concerned with the ongoing mass layoffs of 8% of district staff and the catastrophically mishandled Facility Master Plan process. For anyone who was paying attention, the discussion was all about Eastside; it was not until Oct. 20, 2011, that the district started sharing its plan to first hand over Allan Elementary to IDEA.

From day one, IDEA argued that it had to take over an entire vertical team; only by having children from kindergarten through grade 12 could they work their magic. This project was all about saving the Eastside, the mantra went – yet the latest argument from the district and IDEA is that its recruitment policy is about providing overcrowding relief elsewhere in the district (see "Enroll­ment Stalling, IDEA Gets Magnetic," April 13). Recruitment came in three stages: First, tier one from within the Allan attendance zone, then tier two around Martin Middle School, and then the districtwide tier three push.

Even though the emphasis was supposed to be on Eastside Memorial, Randazzo said, "There was always a sense, and this was written into the contract, that over time we would recruit what we call tier three." He argued that the school is still keeping close to its core mission, as approximately 85% of the students attending in the new school year will live east of I-35. However, of 675 applicants for 600 seats, only 175, or 26%, came from the Eastside Memorial Vertical Team. IDEA pushed an aggressive recruitment campaign around town, including television ads, highway billboards, and a series of assemblies targeting rising fifth graders. Of 16 elementary schools contacted for such IDEA-led sales meetings, five were west of I-35. Every single one of the 16 was at least "academically acceptable," according to the state accountability rankings. Four – Bar­ring­ton, Hart, Perez, and Pickle – were classified as "recognized" in 2011, while Graham achieved the rare distinction of being dubbed "exemplary." None were the kind of "failing" campuses that IDEA was nominally brought in to fix.

Many families in East Austin are baffled as to why the district is working so much harder to ensure IDEA's success than to protect its own campuses. After all, the same AISD board that had vigorously and repeatedly rejected offers for Eastside from Austin-based charter group Southwest Key (see "All Key and No Lock," April 8, 2011) seemed inflexibly determined to hand Eastside and Allan over to IDEA. Moreover, the same board that bowed to public pressure not to close underenrolled neighborhood schools in West Austin was quite happy to shutter Allan and turn it into a districtwide experiment. Richey said, "It's not even conceivable that this would happen at Gullett or Casis or Hill." For her, it was just proof that the district always intended to shutter this campus because it was "an easy target." She said, "It was never 'Allan's not on the table.' Plan A, plan B, plan C, plan D – all of them involved us being closed."

This is just the beginning. In 2013, IDEA will add third grade to Allan, and begin its takeover of the Eastside Memorial campus by transferring the College Prep there. Staff at Martin Middle School are already alarmed about what this will mean for them and for their enrollment, and how much of a hard sell they will see next year when IDEA is recruiting for both sixth and seventh grades. The ripple effect of IDEA's recruitment is already being felt, as Martin has been told that it will lose teachers due to under-enrollment. Education Austin's Zarifis said: "We knew that would happen, because they're siphoning off Martin. So not only did they knowingly sacrifice Allan, now they're knowingly sacrificing Martin."

What's frustrating for Tovar is that the message from the East Austin community has been clear: Get IDEA out of Allan. On a daily basis, he said, parents ask him, "'How can we get our school back? What needs to happen?' It's sad, because they're powerless in their own school." 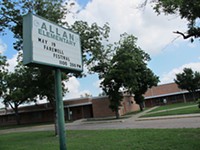