Here's a brief recap of highlights of the contested races we followed in Travis County and elsewhere:

"He had me out block-walking yesterday in the heat," laughed Mayor Pro Tem Sheryl Cole at Lloyd Doggett's East Seventh Street headquarters election party Tuesday night, sharing with other newly skeptical Doggett supporters who had been convinced by his late-stage pleas for help that he might really be in trouble in his congressional race in the newly created CD 35. In the end, he needn't have worried, defeating two opponents with more than 73% of the vote. Not only that, the incumbent Austin congressman won strong majorities across the district, which seemed doubtful at first simply because of the redistricting that had built a barbell-style district with a majority population base in San Antonio. Even there, he defeated Bexar County Tax Asses­sor-Collector Sylvia Romo and also-ran Maria Luisa Alvarado with nearly 54%, while on the other end of the district in Travis, he garnered an overwhelming 93%, and almost as strong in Hays, at 89%. Despite her home turf advantage, Romo raised little money and had a very small campaign presence (virtually none in Trav­is), and Alvarado was a novice without an organization. Doggett cheerfully insisted afterward that in fact a burst of get-out-the-vote volunteer support in the last week of early voting pushed him to victory, and that it was hard to anticipate the outcome in a district so new and untried. "Rick Perry tried to pick our congressman," Doggett told a packed throng of celebrants late Tuesday, "but we made it clear we'd rather pick our own." The happy crowd included Austin City Council Members Cole and Bill Spelman, state reps Eddie Rodriguez and Dawnna Dukes, just elected Travis County Tax Assessor-Col­lector Bruce Elfant, and a host of others. Doggett told the crowd "We can't stop now," and for November, "we need to turn that I-35 corridor into a completely blue ribbon." – Michael King

Although the early vote gave him a roughly 10-point edge over his competitor – an edge that remained steady through election night – criminal defense attorney David Wahlberg was subdued at his election night party at Mexitas, and not quite ready to call it a win over prosecutor Efrain De La Fuente in the race to replace retiring Judge Mike Lynch on the 167th District Court bench. Wahlberg, a veteran attorney but political newcomer, started testing the waters for a run for this seat in fall 2010. "I knew zero when I started running," he said, but he pushed forward and ended up running a campaign he says he's proud of. As 10pm drew near, he still wasn't ready to call it a win – even though roughly 56% of the vote was his. Chalk it up to a judicial temper – it ain't over until it's over. "It's like waiting for a jury," he said. Wednesday morning's posted, if unofficial, results confirmed the victory. – Jordan Smith 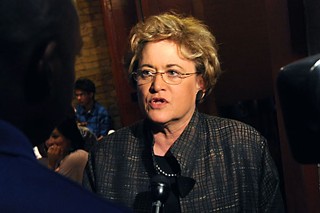 With just over 74% of the early vote tallying in her favor, incumbent Travis County District Attorney Rosemary Lehmberg was in a jovial mood during her election-night party at the Iron Cactus on East Sixth Street. For Lehmberg it was a welcome conclusion to a "pretty rough and tumble – and long" campaign to retain her seat, with veteran criminal defense attorney and former judge Charlie Baird dogging her for months on the campaign trail. In the end, Lehmberg pulled it out – way out – to retain her seat for another four years. Lehmberg is now ready to get back to work, she says, continuing gains made in her first term as D.A. Among her goals for a second term is beefing up the office's environmental prosecutions division. – J.S.

Sheriff Greg Hamilton handily fended off Democratic challenger John Sisson with more than 72% of the vote. Though in November the incumbent will face former Travis County Sheriff Raymond Frank, a local personality among old-timers, Hamil­ton is expected to win re-election easily to the office he has held since 2004. As a centerpiece of his campaign, Dem challenger Sisson, a retired Austin Police lieutenant, sought to shine more light on the role Hamilton has played in the deportation of undocumented arrestees, arguing that the sheriff is not legally bound to hold the individuals for Immigrations and Customs Enforcement as part of the federal Secure Communities program. The two men hold differing interpretations of whether the "holds" for immigrations authorities are mandatory, or merely requests. The issue gained sufficient attention to warrant the county's serious review of a policy that is both costly and controversial. Sisson also pointed to Hamilton's lack of diversity among the top ranks at the sheriff's office. Nevertheless, Hamilton overall won high marks among voters – not only as the incumbent, but based on his reputation for competency and fairness. – Amy Smith

Longtime Precinct 5 Constable Bruce Elfant became the Democratic nominee for Travis County tax assessor-collector with almost 73% of the primary vote in a two-way race. The five-term constable celebrated with supporters at NeWorlDeli on Guada­lupe; he had been heavily favored to best Stanley J. Wilson, a top manager at the tax office who had the backing of his former boss, Nelda Wells Spears. With his campaign infrastructure already in place, Elfant is all but assured a victory in the fall, when he'll face Republican Vik Vad. Elfant laid out some of his goals for the office should he win the job, which also carries the responsibility of voter registrar. "I talked during the campaign about being very aggressive with voter registration," he said, adding that he'd work with the Legislature to pass a bill allowing online voter registration. Stepping up collections of criminal fines and fees owed the county would be another endeavor he'd pursue, along with encouraging more residents to pay their property tax bills online. Elfant has also set his sights on trying to get to the root of low voter turnout, starting next year with a town meeting on voter participation. "This last cycle of elections has been really disappointing," he said. "What is it going to take to get more people to pay attention to these races? I don't know the answer, but I really want to try to figure out the reasons people aren't engaging and what, if anything, can we do about that." – A.S.

"The voters' confidence in me is overwhelming," said incumbent Ron Davis of his early vote lead in the four-candidate race. "The community has spoken." And while he was quick to add that, with 53%, his lead was not invulnerable to an election day shift, it remained steady throughout the evening, with none of his three opponents – Pflug­erville City Council Member Victor Gon­zales (19%), nonprofit director Richard Frank­lin III (16%), and former city project manager Arthur Sampson (12%) – finding enough traction to overcome Davis' incumbency and longtime East Austin roots. Davis countered complaints about his increasingly passive stewardship by pointing to recent bond projects that garnered a lion's share for Precinct 1 ("There's a story to be told here, and it's about improvements in the quality of life"), and his opponents' relatively weak campaign presence allowed him to ignore the Statesman and its consequently annoyed endorsement of Sampson. – M.K.