Trying To Fix the World

After nearly five years, APD Chief Art Acevedo and Austin have made a productive fit 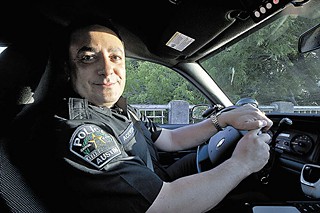 Chief Art Acevedo is a familiar face behind the wheel of an APD squad car. (Photo by Jana Birchum)

On the April morning of the funeral for slain Austin Police Department Officer Jaime Padron, Chief Art Acevedo stopped at Starbucks with his general support officer and right-hand man, Officer Dennis Farris, to grab a cup of coffee and collect his thoughts in advance of the speech he was to deliver to the nearly 5,000 people – including thousands of cops from Austin and around the state – attending the service at Shoreline Church. Acevedo jotted some notes, Farris recalled, but, as usual, did not write out a speech. A few hours later, standing before the collected mourners, Acevedo breathed deeply before launching into a detailed and layered remembrance of Padron – a "servant," and a "hero," who was gunned down by a shoplifter inside a North Austin Walmart on Good Friday. The speech lasted nearly 30 minutes, during which Acevedo barely glanced at his notes. At the close of an emotional speech that at times sounded more like a sermon, Acevedo choked up. "I always tell you I'm proud of you guys," he said, addressing the members of APD. "But I'm more proud than ever today for being your chief. We will get through it; this is just the beginning. And I want to say thank you for letting me lead you. You matter; we'll always be there for you, and we'll get through it together."

"He really missed his calling as a preacher," says Bruce Mills, former APD assistant chief, onetime candidate for APD chief, and former head of the city's Public Safety and Emergency Management Department, which was home to the airport and park police before police consolidation in 2009. Mills hired Padron for the airport force; in 1978, Mills was the partner of Ralph Ablanedo, the last APD officer gunned down in the line of duty. Mills is among many – including city officials, APD officers, and department critics – who give Acevedo high marks for his ability to connect with people and to talk "from the heart," as Mayor Lee Leffingwell puts it. "I've never seen him use a note; he just gets out there and says what he feels," Leffingwell says. "It's always impressed me that he will speak to anyone at any time."

Indeed, in the nearly five years since Acevedo signed on as the city's top cop, he has changed the face of the department – turning it from an organization that appeared reluctant at best to engage with the media and the community into a department that is now defined by the energy and charisma of its 47-year-old leader. Since being sworn in as the city's eighth police chief in July 2007, Chief "Ace" has confronted a number of challenges. He's led the department through a handful of officer-involved shootings and a federal Department of Justice review prompted by allegations that Austin police have used force disproportionately against minorities; he's fired 21 cops and handed out 187 lesser suspensions; he's butted heads with the police union boss and the city's police monitor; he's restructured major department operations – including how it patrols the city, how it handles officer discipline and how it investigates its own. And, so far at least, he's weathered every storm with his reputation as an affable straight-shooter largely intact.

Acevedo is not without his critics, sometimes quite harsh ones, particularly those who say that he's too quick to justify officers' use of force. Others say that the chief's outgoing manner and reputation only serve to disguise institutionalized practices in a department that either resists change or endures it only grudgingly, after years of public pressure. But even longtime department critics, including Nelson Linder of the Austin NAACP, offer some praise for a chief who they say has helped to turn the department into a more community-friendly force. "The biggest thing is visibility," Linder says. "He talks to people and makes himself visible to every segment of the population. I think that is his strength."

In December 1968, Acevedo, a native of Cuba, arrived with his family in Miami, where he spent two weeks at the House of Liberty, a World War II barracks site at the Miami airport, while the family was processed as political refugees. He was 4½ years old. On New Year's Eve, the family flew to Los Angeles, settling near relatives in the small, working-class city of El Monte, east of downtown L.A.

His family was tight-knit, and Acevedo had a particularly close relationship with his now-deceased father, whom Acevedo says instilled in him a sense of civic duty that eventually led him to police work. "I was raised with a real sense of patriotism," Acevedo says of his dad, who moved the family to California in part to help them to assimilate outside the dominant Cuban culture of South Florida. "My dad would tell us that there was no better place on Earth than in the United States and that this country gave us the greatest gift of all, and that's freedom." His father was a one-man construction company, and the family lived modestly in the city, a rough edged place where Acevedo was first exposed to the gang culture that would become a major focus early in his policing career. "He comes from a pretty poor area in El Monte. He knows local gang members; he'll play basketball with them, but he's not going to take any crap," says Paul Golonski, a friend and former colleague of Acevedo's in the California Highway Patrol.

Acevedo knew early in life that he wanted to serve his country, and he considered three ways to do so: go to the U.S. Military Academy at West Point, become a cop, or become a deputy district attorney. It wasn't until he was nearly finished with his first year in law school that he decided instead to become a cop. "California had like 150,000 attorneys, and I asked myself, 'Do they really need another attorney? Or do they need good police officers who want to go out and serve people?'" he recalls. "And when you really ask yourself that, I think the answer is that we need good police officers." Acevedo applied to the L.A. Police Department, the L.A. County Sheriff's Department, and the California Highway Patrol. He was accepted by all three; he joined the CHP in part because of its "world-class reputation," he says, and in part because the CHP academy started a month before the other two.

Fresh out of the academy in 1986, Acevedo took a job patrolling in East L.A., a densely populated area dominated in those days by gang culture and violence. It was his first choice of assignment. "Because if you want to be the best, you've got to expose yourself to the most challenging environment possible, and East Los Angeles had a reputation of being one of the most challenging police environments in the United States," he says. It was on those streets that he impressed Golonski, then a sergeant with the CHP. By the time Golonski was assigned to East L.A. in 1991, Acevedo had already begun his rise to the top of the CHP, scoring a "plum job" in recruiting; still, the young and ambitious Acevedo would make a point of getting out to work the streets in order to keep his skills sharp, Golonski recalls. "He was very much a crime buster but also very community-oriented," he says. When the pair would meet for coffee, it seemed that Acevedo knew everyone, Golonski said. "He knew the dishwasher, he knew the mayor, and he knew everyone's first name." Acevedo and other APD officers subdue a suspect after a fight on May 19. (Photo by Jana Birchum)

Golonski recalls a time when the pair was patrolling a particularly rough neighborhood and were approached by a gang member. "What are y'all doing down here?" Golonski recalls the man asking; "I thought you were afraid to patrol here," he told them. Golonski and Acevedo "looked at each other. 'I guess we know what area we're going to be flooding with cops over the next few weeks!' We went back one month later, and that same guy came up to us – 'Oh! Oh! That's enough! The homies are coming down on me!' We kind of laughed about it."

Acevedo rose quickly through the CHP ranks, while developing a reputation as a supervisor who was not afraid to get out and work the streets. (As APD chief, Acevedo still works the streets – he calls it his "therapy" – and has made more than 60 arrests.)Friends were also impressed by his fearlessness in standing up to superiors when he felt that a bad cop under his supervision was being protected by the brass, and they saw him as someone who would push through the "glass ceiling [for Hispanics] at the CHP," says friend and former L.A. Sheriff's Deputy Hank Aguilar.

By late 2003, Acevedo was poised for consideration to be the next CHP commissioner – he'd been encouraged to apply for the position by a state lawmaker who told him that, under incoming California Gov. Arnold Schwarzenegger, the current commissioner might not be reappointed. In early 2004, Acevedo applied, apparently annoying the commissioner, according to a report by the California State Personnel Board. Acevedo was subsequently made the target of a smear campaign (an anonymous letter showed up at CHP – as had happened in the past with other employees who were, for whatever reason, in disfavor – accusing him of sexual harassment) and, ultimately, retaliation by the CHP's top brass, Acevedo charged. "My life was fucking turned upside down," he recalls. "Look, when you're a line officer, what impacts you is right in front of you – your calls for service and reports. You don't have a clue sometimes to the politics that are going on, and the higher up you go in an organization, the more you start realizing that not everything is working the way it's supposed to be working."

Acevedo filed a whistleblower suit against the department, and in December 2007, the CSPB filed a lengthy report excoriating the actions of the former commissioner and his staff and agreeing that Acevedo had been retaliated against. Eventually, after Acevedo had already arrived in Austin, the CHP settled the suit for nearly $1 million.