Yard signs like this one appear along Woodview in the Rosedale neighborhood in opposition to a proposal to convert a hair salon into a cafe. (Photo by Jana Birchum)

Chris Allen and his wife, Gina, are the co-chairs of the zoning committee of the Rosedale Neighborhood Association in Central Austin. For two decades, Allen says, the couple have encouraged development in and around their neighborhood – specifically along Burnet Road and North Lamar. "We embraced that type of development ... along our high intensity corridors," he says. "Rosedale has a really good reputation ... for working with change." But when Sarah McIntosh began developing plans for a cafe and grocery at the corner of Hancock Drive and Woodview Avenue, Allen balked.

As of last Friday, the neighborhood's objections to this particular change had won a small – and possibly temporary – victory at City Hall.

The neighborhood has concerns about some of the specifics of the cafe's plans, as drafted by architect Michael Hsu, and some unresponsiveness on the part of city staff – and the manner in which Hsu pursued his permitting – has aggravated the situation. But the larger, perpetual citywide question of how best to approach growth and density – what the pros call "infill" – in portions of Austin that have not historically been so ... filled in ... hangs over the debate.

Sara Smith lives across the street from the site. Six years ago, when she and her husband bought their home, their neighbor was a salon. "We got along very well with the salon owners," she says. Then, they heard a rumor that the salon's owners were making ready to turn the building into a restaurant. Smith brought the issue to the NA. She says they told her that the rumor couldn't be true. "What's kept Hancock in check ... is that the sites are very small," says Allen. "It's effectively impossible to put high-intensity uses on those sites."

Allen knows whereof he speaks. In addition to his long experience on the Rosedale zoning committee, Allen is an architect with 25 years in practice. He says the lack of detail on the construction documents was "shocking," and that consultations with a handful of other architects resulted in the conclusion that "we were all surprised that it got approved." At the center of the debate over the property is the amount of parking available. Allen and Smith contend that the former Innu Salon could never support more than 14 spaces on-site. Hsu, through an attempt to grandfather a historical version of the site plan and a bit of reconfiguring, insists that the lot can support 21. The magic number needed in this case is 20.

What doesn't appear to be in question is whether the zoning at the site would allow a restaurant. This gets back to Allen's point about the small sites. Though much of Hancock is zoned for general commercial use – "GR," in cityspeak – the relatively small lot sizes were supposed to keep denser uses, like restaurants and cafes, out of the residential streets, funneling them instead onto nearby major thoroughfares.

More problematic than the details of the case may be the approach Hsu took to get the city's approval. He filed for a "site-plan exemption," which amounts to an administrative approval for the project based on there being no significant change in use. For the city, a salon is roughly equivalent to a restaurant; Allen and Smith reject that interpretation. And thanks to its administrative nature, a site-plan exemption also leaves little room for public input – a mortal sin for a city where public neighborhood planning is a central ethos. Allen and Smith also claim unresponsiveness on the part of the city when Allen first asked about the property, which ultimately led the neighbors to miss a deadline to appeal. The neighborhood contacted City Council offices, and last Friday, May 18, staff suspended the exemption based on research by Allen that illustrated that some of the proposed parking at the southern portion of the cafe would encroach onto a neighbor's property.

However, that may not be the end of the story. Chris Johnson with the city's Planning and Development Review Department (who says the original scheme was approved "in error") notes that Hsu and McIntosh can resubmit the plans. They could still earn an exemption if they correct the lot line and illustrate that the site can support the required 20 spaces.

Allen criticizes the city's review process. "Our biggest concern is that staff approved the plan for this project with no scrutiny," he said. "Had they studied it for any time at all, they would have noticed a large number of abnormalities and omissions from the submitted site plan that should have made it impossible to approve."

There's no small amount of irony in the fact that McIntosh is hoping to open a spot that would depend mostly on neighborhood traffic for business – and she suggests that Smith and Allen might be imagining a larger operation. Allen says he didn't know what to expect, because McIntosh hadn't replied to earlier neighborhood attempts to contact her. "This project has been a secret from the start, so this is the first description of her proposal we've heard," he wrote in an email. Small as McIntosh's plans may be, it's not just her project that Allen worries about. "Once granted, the entitlement lives with the land forever. If she doesn't get her financing next week, or her tiny restaurant fails in six months (as so many do), the next restaurant will come along, and the only thing you can be sure of is that it will be designed to put as many butts in seats as possible to pay the rent." 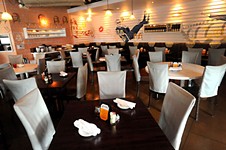 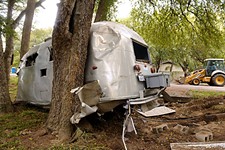 Council: It Never Rains but It Pours
Onion Creek residents urge Council to move on buyouts 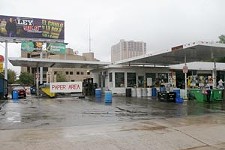