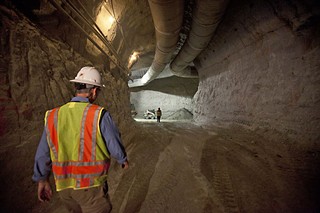 The Waller Creek Tunnel Project, a flood-control tunnel running from Waterloo Park to Lady Bird Lake, is about one-third complete. Joe Pantalion of Austin's Watershed Protection Department looks from the main tunnel toward the Fourth Street access shaft, during a May 19 media tour. (Photo by Jana Birchum)

› City Council faces a big agenda today (Thursday), highlighted by discussions of the revised Green Water Treatment Plant development proposal and the Imagine Austin Comprehensive Plan, which should arrive in the early evening – and there's plenty more where that came from. Council announced that the swearing in of the four re-elected incumbents will take place at 6pm June 25. See "Task Lists and Wish Lists."

› The Transportation Department revealed the latest vision for urban rail to council's Tuesday work session, describing a central core phase one (Mueller to UT to Capitol to Convention Cen­ter) that would cost $550 million (split between local and federal funding) and be operational by 2021. Transportation Director Robert Spillar called those "conservative" estimates, and said the line could come in faster and cheaper.

› Parks and Recreation Department officials have back-pedaled, at least temporarily, on soliciting proposals from private entities to run Zilker Botanical Garden. An outpouring of opposition from garden clubs and other residents prompted parks staff to pull the agenda item shortly before Tuesday's meeting of the Parks and Recreation Board. Of the eight people who spoke on privatizing the garden, only Austin Parks Founda­tion Pres­ident Ralph Webster favored exploring the idea.

› The city Planning Commission Tuesday passed a set of new recommendations for council, meant to govern short-term rentals. All rentals would need a health and safety inspection; those that are not owner-occupied would also need a conditional use permit from the city. City Council was scheduled to consider the matter today (May 24), but it may be postponed.

› Two complaints filed with the Texas Ethics Commission, allege that Travis County judicial candidate David Wahlberg accepted single-entity campaign donations in excess of the legal limit, and that he reported a string of personal loans as campaign contributions.

› In an evening "town hall" call with Texas Right to Life members, Gov. Rick Perry stressed the importance of ensuring that pro-life Republicans are elected to the Lege, and that they reject the "false, misleading, and corrosive beliefs" of those who support reproductive choice.

› Ian Davis on Monday resigned from his national* Sierra Club post based in Austin, two weeks after taking a leave to inject himself into the mayoral race. Davis, who is married to Mayor Lee Leffing­well's policy aide, raised unverifiable claims against Brigid Shea regarding Formula One consulting, after the local Sierra Club political arm had endorsed Shea. With Davis out of the picture, Flavia de la Fuente steps up as field organizer for the club's Beyond Coal campaign.

*Headlines has been corrected to show that Ian Davis was affiliated with the national Sierra Club, not the state chapter.