Meet the New Council, Same as the Old Council

All four incumbents seeking re-election will see another term, though some cut it closer than others

Mayor Leffingwell actually ran ahead of both Martinez and Spelman in the traditionally older and more conservative early vote, but he lost about 5.5 percentage points, to below the 50% run-off threshold, on election day – while the other three incumbents each improved their standing. 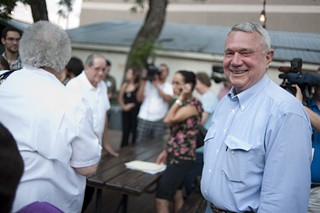 Mayor Lee Leffingwell smiles as he secures another term. (Photo by Sandy Carson)

Two for Scholz: Leffingwell and Martinez Win Together

At the combined victory parties for Mayor Lee Leffingwell and Place 2 Council Mem­ber Mike Martinez at Scholz Garten, it was same result, different paths, as both incumbents returned to the City Council.

At Leffingwell's party outside, there were a lot of chewed fingernails. Internally, some of his campaign staff were concerned that he had not responded tough enough or early enough to challenger Brigid Shea's negative campaigning. Throw in a record low mayoral election turnout, and the landscape was volatile to say the least. The Travis County Elections Division did little to alleviate their stress; technical problems kept everyone on tenterhooks as the clock dragged on beyond normal posting times. Finally, at 8:38pm, the first numbers arrived by email and gave the incumbent a blistering 20-point lead over Shea (with Clay Dafoe a distant third). Most importantly, Leffingwell's 55% share of the early vote gave him a buffer zone against his biggest enemy – a run-off.

He was not out of the woods. There was a big disparity between early voting and election day results, and Shea's numbers rose throughout the night. Individually, she was not a threat, but Dafoe's 11% and her late boost could have dragged Leffingwell down sufficiently to bring everyone back in June. As the precinct breakdowns came in, there were some serious calculations going on. But by 10pm, with only a handful of outlying precincts in Hays and Williamson counties left to report, it was clear that Leffingwell had secured his second term with 52%. Still waiting for a concession call from Shea, the mayor took the stage to thank his staff and supporters, and came out swinging on the same policy points – Water Treatment Plant No. 4, Formula One, urban rail, incentivizing job creation, single-member districts, and November council elections – that had motivated Shea's challenge.

Indoors, Martinez took an early victory lap and spent the evening socializing. Coun­cil Members Laura Morrison and Kathie Tovo stopped by briefly before heading over to the Shea postmortem (bypassing the Leffingwell celebration), but Chris Riley sat with his staff as Martinez cleared the hurdle of his single challenger, Laura Pressley, 56% to 44%. Pressley took a handful of Williamson County boxes but could not maintain any push in Travis. Martinez said bluntly, "It's not a secret that Williamson County is a strong Republican electorate, and it's not a secret that she's a strong Republican supporter." – Richard Whittaker

"I'm very glad to be here with a smile on my face," Bill Spelman told a jubilant crowd Saturday night at the Victory Grill. Facing six challengers, the incumbent Place 5 council member was widely speculated (including by the Chronicle) to land in a run-off. But when the early vote came in, Spelman was hitting 55%, a lead that broadened during the evening to 58%, and he was happy to avoid another month of campaigning. Later he would conclude, "We had teams of people in Austin neighborhoods knocking on thousands of doors talking to thousands of voters ... and I think we did just what we needed to do."

His closest competitor, Dominic "Dom" Chavez, didn't quite break 20% (with the others strung out behind). Chavez said later that while he ran "a positive campaign," and expects to stay engaged, he "just didn't have the resources" to compete successfully against an incumbent.

Spelman thanked his campaign staff and his City Hall staff, providing each with half-serious gifts inspired by World War II British prime minister Winston Churchill. "Politic­ians come in two types," Spelman said. "Those who want to be Gandhi and those who want to be Churchill. ... I'm no Gandhi." With his campaign manager, Jim Wick, joining him onstage, Spelman joked that campaign managers hate the question, "Can you guarantee victory?" In a rather more serious predicament, with the German army threatening invasion, Churchill told the English people during the Battle of Britain, "We cannot guarantee victory. We can only deserve it!" – to which Spelman added a not-very-convincing Churchillian inflection. He then had Wick unveil a framed poster of Churchill declaring, "Deserve victory!" To his office staff, he gave a similar memento of the war, a government public service poster exhorting, "Keep Calm and Carry On."

Spelman spoke of the difficulty of roughly six months of campaigning, glad to be finally done. He noted that it's impossible to be a public official without making people angry virtually all of the time; he saw a broad, cheerful show of hands to the question, "How many of you have disagreed with something I've done – be honest!" Yet he noted that Saturday's election results, in all the council races, reflect that the voters believe that the "folks trying to run the city are doing a pretty good job." He thanked everybody for that outcome, concluding that it shows "We're a grown-up city; we can do the right thing." – Michael King 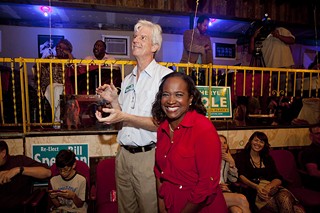 Place 6: It's Cole in a Landslide!

Incumbent Mayor Pro Tem Sheryl Cole's contest against a single novice opponent, Shaun Ireland, figured as a walkover, and that's how it ended Saturday night at the Victory Grill. Her lead began large and grew, ending at 71% – by far the largest margin of four incumbents seeking re-election.

Greeting well-wishers that included family members from Austin and Wichita Falls, Cole joked that she and Place 5 incumbent Bill Spelman had only lately decided to hold a joint event, and now "nobody's in charge!" She declined to jinx the outcome with an early victory claim, saying only, "I'm anticipating a strong statement by the voters of confidence in my leadership." Before the polls closed, Ireland told the Chronicle that while he knew his chances of defeating a well-known incumbent were slim, "I gave the people of Austin a choice. ... I don't believe in uncontested elections."

At nearly 10pm, when the returns were confirmed, Cole said, "I'm grateful that the citizens of Austin have shown such confidence in me, and I plan to go back to work harder than ever." Cole thanked her staff and supporters, and noted proudly that her son Nelson had voted Saturday for the first time: "And he better have voted for me!"

Several council colleagues had dropped by, and Cole teased them a bit, saying she was very glad that Spelman is returning to the dais: "I am so glad he's back to watch Laura [Morrison]." But she also praised the council as "the hardest working group of people" she has ever known, with the city's best interests at heart: "For all that we might do wrong, we are, as a community, doing something right."

Asked if she thought the re-election of all four incumbents suggested few changes in city policy or perspective, she laughed and said, "Give us until Monday morning!" – Michael King