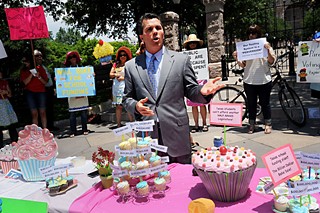 Save Texas Schools presents a novel way to fund the $5.4 billion shortfall in public education finance: Sell 54 cupcakes priced at $100 million a piece. Backing their call to make school finance the top issue in the 2012 primaries, Austin Rep. Mark Strama remarked at a May 16 rally at the Capitol, "I do love the bake sale idea, but this is not the way to fund public education." (Photo by John Anderson)

› No regular meeting of City Council today, but a very full agenda is already posted for May 24. And this week's Austin Energy work sessions are still simmering, followed by a special work session Tuesday, May 22, 9am to noon, to address urban rail proposals – and nobody should have to leave on campaign business.

› Soon enough, council will take up the November bond package – an initial citizen task force recommendation includes
$575 million in projects, to be winnowed to $400 million or less. In theory, that leaves room for a separate urban rail proposal, although in a still recessionary year, council members have been audibly cautious about high numbers.

› With the elections over, Council Members Bill Spelman, Chris Riley, and Sheryl Cole have grasped the thorny issue of utility pricing, proposing a smaller increase in rates than that proposed by Austin Energy. However, fellow Council Members Laura Morrison and Kathie Tovo have already said they will oppose it and want further review of the plan.

› If you blinked, you missed one election and stumbled into another – the May 29 Demo­crat­ic and Republican primaries, with early voting continuing until May 25. See the Chronicle endorsements in the Dem primary and a brief report on the Republican contests.

› Early voting numbers for the May 29 primaries show Travis County Republicans voting in marginally higher numbers than Democrats. GOP turnout has been highest in Western Travis, which has become ground zero for tough GOP House and Senate primaries this year (see "Seeing Red in House District 47").

› The Austin Animal Center, at or above capacity since it opened its new facility on Levander Loop, this week faces euthanizing animals in order to stanch overcrowding. The shelter is waiving adoption fees through the weekend in the hopes it can maintain "no-kill" status with a 90% save rate.

› The Austin Music Hall has been repossessed by Houston-based OmniBank. The iconic but troubled venue has struggled ever since renovations in 2007 and has faced increased competition with the opening of ACL Live at the Moody Theater and Emo's East.

› The Court of Criminal Appeals on Monday evening stayed this week's execution of Steven Staley while it considers whether he is too mentally ill to be killed (and, presumably, whether he can be forcibly medicated in order to be executed). For more, see "Staley's Fourth Execution Date Approaches," May 11.

› Rumors of the demise of Ron Paul's presidential hopes have been greatly exaggerated! The Texas Congressman announced on May 14 that he will pull back on primary campaigning but instead will focus on picking up delegates at state conventions.