Then There's This: Skid Marks

The mayor's race takes a sharp turn in the final lap 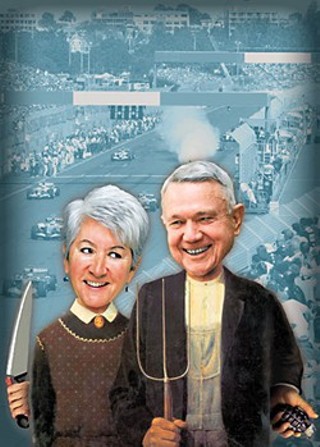 Did mayoral candidate Brigid Shea actively pursue a paid consulting job with organizers of Austin's Formula One, which she's now vigorously attacking in her campaign to unseat incumbent Lee Leffingwell?

That's the claim made by at least four people tied to the Leffingwell campaign and Circuit of the Americas, the local F1 outfit whose backers are supporting the incumbent. The allegation was made a few hours after Shea charged that Leffingwell tried to hide "bundled" contributions from F1 associates. (Shea's campaign announced Wednesday that it had found two other F1-related contributors in Leffingwell's report, one a named defendant in a lawsuit filed by ousted F1 promoter Tavo Hellmund.)

The charges and counter-charges played out in a 24-hour news cycle this week; Shea will likely continue hammering the bundling theme. Who would have thought that five months ago, when she was struggling to find campaign staffers who weren't already occupied, that there'd be a real possibility of a run-off in the mayor's race – thanks to third candidate Clay Dafoe?

So did Shea hustle the COTA chiefs for a piece of the F1 pie? How you see that depends in large measure on which candidate you're rooting for – or, put another way, whether your views are more closely aligned with the local grassroots enviro crowd or with the developers. It's illustrative, for one thing, to look at who's publicly making these "accusations" of Shea:

• Ian Davis of the state chapter of the Sierra Club, husband of Leffing­well policy aide Amy Everhart. Davis, who this week opted to take an indefinite leave from his Sierra Club job, had been weighing whether to pursue a newly created position at COTA to head up F1's green initiatives, and solicited advice from a wide range of activists with specific expertise about how to green up the facility under construction in Southeast Austin. Davis said he was hoping to form a team to work on the project. "I had multiple meetings with Brigid, and she did express interest in a paid consulting gig," he said.

• Richard Suttle, a longtime developer attorney at Armbrust & Brown and F1 lobbyist who holds considerable sway at City Hall, says the two talked several times about the project, the first time at his law firm's annual Christmas party in Decem­ber 2010. As Suttle recalls: "Brigid had expressed interest in being part of a team. ... At the time she said it would take some money."

• Steve Sexton, COTA president, claims to have a copy of a contract proposal that Shea submitted, but more than likely it's a memo she sent to Davis, outlining several recommendations for COTA to be "legitimately sustainable."

Shea and other enviros who were brainstorming ideas with Davis insist she wasn't on the hunt for F1 work for herself, but was pressing COTA on how committed they were to building a cutting-edge sustainable project, as they had assured the City Council last summer as part of a compromise agreement spearheaded by Council Member Chris Riley. At the time, Shea and others were trying to make the best of a battle they had fought and lost. "Most of the green community felt it was an emergency-type situation because the potential environmental damage from F1 was thought to be extensive and permanent," said Robin Rather. Shea "just said she'd be willing to try to green the damn thing up to the extent that is technically possible. Where is the big crime in that?"

Shea provided an email chain of conversations between various parties. The memo was sent to Davis in advance of a meeting he had with Sexton. Shea, according to one of the emails, was eager to know the outcome of the meeting. "Did you show Steve my memo?" Shea asks. "If not, I'm inclined to send it to him as an indication of how much work needs to be done beyond the Riley contract ... let me know your thoughts."

Shea says her memo was a summary of about 45 minutes' worth of research about green initiatives already under way in the racing world. "The thing that was shocking to me was how much information was readily available, that was so far advanced beyond what the city had done with the Riley [agreement]. It was embarrassing." Shea and others "were very willing to keep in conversation with these guys, but it's not clear they were serious." Most of what's in the Riley agreement is already required in the land development code, Shea said (although the F1 site is not yet in the city).

Activist Brandi Clark Burton* says she and Shea had two meetings with Davis before he met with Sexton. "We didn't discuss money, except theoretically, like 'would there be enough money to fund a research facility with a team of people to deliver?'" Clark said. "Long story short, I think it became clear that F1 didn't seem terribly serious about this. They didn't return any of Brigid's calls to find out what they had done already. ... When all was said and done, they offered Ian less than what he was going to make at the Sierra Club, and there was no extra [funding]. As soon as I heard that, I just rolled my eyes and walked away. And Brigid agreed, saying, 'If that's where they're headed with this, forget it.'" 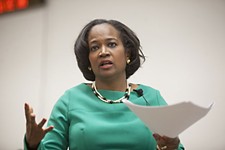