Sorting out the campaigns and candidates

If this is May, there must be a couple of elections.

While the Chronicle News staff is accustomed to previewing elections just prior to early voting, we're not accustomed to whipsawing from one election (City Council, this Saturday, May 12) to another (party primaries, May 29), as we're doing this week. We know readers and voters who don't follow campaigns for a living will be doubly confused and are trying to learn quickly who's who and what's what.

That's the purpose of this week's feature coverage devoted to the high-profile contests on the Democratic side, with additional brief commentary on the rest of the contested races. We've focused on the Democratic primary both because that's the main interest of most of our local readers and because (to be frank) we had neither the time nor space to cover the GOP races this week.

We certainly hope we haven't made matters worse. Please consult our city coverage and endorsements for your vote Saturday, and our primary coverage for your early voting or to get you prepped for May 29. It didn't have to be this way; the state redistricting wars, ignited by the Republican-dominated Legislature and now in federal court, scrambled the primary dates to the point that Texas now has no influence on the presidential nomination, while making it likelier that many primary contests will be skewed by low and fringe turnout.

There is one other factor we shouldn't forget: the 4-3 rejection by the City Council of the legislatively granted opportunity to move this May election to November, when city turnout would be much higher, the voter demographic would be much more representative, and – oh yes – there would now be much less voter confusion over just which election is happening this week.

I won't rehearse here last fall's arguments over the election move, nor its bitter backstage politics. (Interested readers can consult "Point Austin: Unrepresentative Government," Oct. 14, 2011, or "Point Austin: Voter Suppression Made Easy," Sept. 30, 2011.) But those who argued, among other irrelevant things, that May voters are "better informed" than November ones have already gotten what they wanted: a minimal turnout, in the 10-13% range of registered voters, that may well do its intended work to skew the outcome. Incum­bent Bill Spelman, for example, one of the four council votes rejecting the move (with Sheryl Cole, Laura Morrison, and Kathie Tovo), may find himself in a run-off exacerbated by a tiny turnout that includes a disproportion of folks whose only mantra is, "Throw the bums out!" That may be "karma," but it wasn't what Spelman had in mind when he said his previous unopposed race was coming back to bite him. Whether there will be similar effects on other races, we'll see.

Better informed or not, we can be certain this electorate will be less representative of the city. That was confirmed for me this week by three people in a professional position to know. Consultant Mark Littlefield (currently working for the Lee Leffingwell and Mike Martinez campaigns), said that for one thing, the May median voter age can be higher by more than a decade – 56 years instead of 42 (some credit due to all those disappeared college students). Jeff Smith of Opinion Analysts (currently working for the Brigid Shea campaign) said that broader campaign outreach and public interest results in a "much more representative" November electorate, definitely not just "more of the same" voters. They each concurred with city demographer Ryan Robinson, who told me the May electorate reflects "more western" neighborhoods and voters, and is "whiter, more likely to be homeowners, and generally more affluent" than those who vote in November.

"You still have a tilted landscape" in November, said Robinson, when Tarrytown turnout can rise to a remarkable 92%. But in heavily Hispanic Dove Springs, for example, turnout rises from as low as 2% in May into the 30s or 40s for November – and those citywide effects result in "a much more diverse electorate."

Make of that what you will.

Progs on the March

For me, the most amusing aspect of this campaign has been the desperate attempt by certain self-defined "progressive" groups – because, for one reason or another, they're mad at the incumbents – to turn reflexively anti-government libertarian candidates into "progs" for the purposes of this election. BATPAC, the Austin Neighborhoods Council, and the Austin Sierra Club have every right to call for the ejection of the mayor or Place 2 incumbent Mike Martinez, for whatever reasons. But they shouldn't insult the voters' intelligence, for example, by describing anti-fluoride obsessive, Texans for Accountable Government enthusiast, and utter policy novice Laura Pressley as displaying an "admirable grasp of the issues" (ANC), "an excellent grasp of our issues" (Sierra Club), or most absurdly, as having "reached out to leaders in the Hispanic community" (BATPAC on Gavino Fer­nan­dez and his dozen or so hangers-on).

I was pondering these absurdities as I listened to Pressley's late April interview with Infowars demagogue Alex Jones, whom she called "wonderful" and credited with inspiring her to run, as they chortled together about their hatred for the government fluoride conspiracy and their affection for Ron Paul and handguns.

Sacrificing your public credibility for what appears to be short-term political gain is a pretty surefire way to lose both. 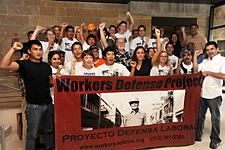