Planned Parenthood Back in the WHP – Again

In the latest move in this tennis match, 5th Circuit overturns last-minute stay 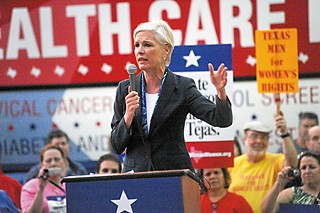 Planned Parenthood's Cecile Richards spoke in Austin at a rally for women's health in March. (Photo by John Anderson)

A three-judge panel of the 5th U.S. Circuit Court of Appeals on May 4 overturned a stay by one judge that banned Planned Par­ent­hood from participation in the Women's Health Pro­gram. The stay, imposed last week in a midnight order issued by Judge Jerry Smith, had suspended a temporary injunction issued by federal district Judge Lee Yeakel on April 30 that blocked the state from kicking more than two dozen of the state's PP clinics out of the program.

At issue is the new "rule" crafted last year that dubs the WHP-participating PP clinics, which do not provide any abortion care, as "affiliates" of PP clinics across the state that do provide abortion services – but are not funded by the WHP. The PP clinics sued the state in federal court, arguing that the ban on their participation violated both their First Amendment right of free speech and association as well as their 14th Amendment equal protection rights. Lawyers for the clinics and for the state argued the issue before Yeakel in mid-April; on April 30, Yeakel ruled in favor of the clinics, saying they had demonstrated that they were likely to prevail at trial, and issued an order that would bar the state from excluding the clinics as WHP providers until a full trial on the merits of the case could be heard, possibly next month. Indeed, at the hearing Yeakel told the lawyers – Helene Krasnoff for PP and Solicitor General Jona­than Mitchell for the state – that he understood timing was of the essence in the case – a resolution needs to be reached so that the program can continue (or not, as the state may have it) based on the legality of the state's rule. Both Krasnoff and Mitchell said they could be ready to argue the merits within a month.

Nonetheless, Mitchell penned a request late on April 30, asking the 5th Circuit to intervene and arguing that to allow PP to continue in the WHP was an emergency because state law bans the clinics, and to allow them to remain involved, the state would be forced to shut down the entire program, putting in jeopardy the health care access of more than 180,000 women enrolled in the program.

While the drama of Mitchell's argument might have impressed Smith after hours on April 30, that didn't last; on Friday, Smith was among the three judges who reversed the stay, reinstating the injunction that allows PP to remain active in the WHP until a trial can be held. In part, the panel ruled that the state's characterization of the "emergency" nature of the situation wasn't exactly accurate and that the state has yet to address a potentially major failing of its case. Specific­al­ly, the state has not done anything to counter the PP argument that the issue of affiliation among abortion-provider clinics and their sister clinics that do not provide such care was already addressed in an earlier lawsuit, Planned Parenthood of Houston and Southeast Texas v. Sanchez. As a result of that case, the state's PP clinics legally unaffiliated themselves in order to satisfy Texas that no taxpayer money was going to fund abortion services.

So for the time being at least, the PP clinics involved in the WHP – just 2% of all WHP providers in 2010, yet they served nearly 50% of all WHP clients – will remain able to see, and be reimbursed for, services provided to the tens of thousands of women who make PP their provider of choice.