D.A.: Lehmberg and Baird Have Issues

We put considerable thought into our endorsement in this race, and in that spirit, we invited incumbent District Attorney Rosemary Lehmberg and challenger Charlie Baird to the Chronicle offices last week to hear from both of them one last time before we made our decision. For the most part, we knew what issues would arise, based on our previous conversations with them back when we thought these primaries might have been in April (see "D.A. Face-Off," Jan. 20), and we weren't disappointed; they covered 24/7 intake (in which assistant district attorneys would be available around the clock for arrest review), racially disproportionate justice, environmental prosecutions, and justice writ large in a relatively short amount of time. But even having had our eyes on this race for months now, it's easy to get lost in some of the campaign rhetoric. This is a hard-fought race between two candidates bristling with tension ("If you like the status quo, then she's your lady," Baird conceded; "Only you can decide what you want in your district attorney," responded Lehmberg), and we think it's worth taking another look at their (admittedly condensed) respective positions on issues important to Travis County voters.

RL: We actually had three that were brought to us, and we did DNA testing, and two proved to be wrongful identifications and one confirmed guilt. And there wasn't much publicity about the one that was confirmed, because it was just confirmed. ... But it was after the two mistaken identification deals ... that we began looking at, eventually, 400 old cases on our own to determine whether biological evidence was present that could be tested but wasn't. And we did not find any exonerations. We retested about six cases and did not find any exonerations.

CB: She says there have been three DNA cases, and that two of them were exonerations. I don't know what changes they made as a result of that. ... When there is a plane crash, everybody stops and they go out there and they figure out why did this plane crash, and let's make sure it never happens again. It seems like to me that they don't do that in the criminal justice system. They don't say, "Well, my God, why did this happen in Morton?" Or Ochoa and Danziger?

RL: I agree that bond is meant to ensure that people show up for court, but I also believe you have to look at public safety factors, too. So there were some bonding procedures that I didn't agree with, but for the most part I'm respectful of the fact that people put judges on the bench to make discretionary sentencing decisions. And so that's why you didn't hear me hollering very often. And the problems I have I addressed to him pretty much privately.

CB: You go to war and somebody does this rape and killing and this Abu Ghraib stuff, and you say, "How did that happen?" Well, it just happened, and we're sorry it did, but that doesn't mean we shouldn't have been over there or had a prison or whatever the situation was. But there is a tremendous fear of that. It is in the D.A.'s Office – I mean, how you would disqualify people who have an arrest is ridiculous to me.

RL: There's nothing new about [24/7 intake]. ... And the fact of the matter is that while I would like to make sure the criminal justice system is totally fair, it is true that the cases that come into my system are made by law enforcement, and it is my job to assess and judge them. And we do a good job of screening those.

CB: They have what I think is probably the highest percentage of dismissals of a major metropolitan county in Texas. It's a "garbage-in" type deal, and once you realize it, you have to dump it. ... When I'm D.A., my people are going to say, "Wait a minute, this is not a crime; this is not criminal conduct."

On the Death Penalty and Life Without Parole

RL: It is true that we seek the death penalty less in Travis County than in other jurisdictions. ... With the institution of life without parole, you're seeing prosecutors everywhere seeking the death penalty less. ... In the past, when people could parole, it was pretty important that they be on death row, which didn't allow for parole. But now you've got to question whether or not they're dangerous in prison, not in free society. And so that has totally shifted the issue of the special issues that a jury answers.

CB: In other counties, in major metropolitan counties, I'm not sure that we do not, on a per capita basis, seek the death penalty more often under Rosemary than under other people. ... She's sought the death penalty three times and has received it in each case. ... So I think that she's pretty aggressive about seeking the death penalty. ... If it's a situation where they're sentenced to prison for life, they're never going to get paroled, and they're going to die there – that's a death sentence, it just takes 30 years to get there, but that's the same thing; we're extracting the death penalty from that individual.

CB: She has had ... a significant role, and maybe the dominant role, in establishing the D.A.'s Office the way it is now. ... The things that I'm talking about, they just ruffle her feathers. They just upset her for someone to say there might be a different or a better way of doing things than the way we're doing it now. And so she never has said, "Charlie, this is a good idea" or "We tried that, and this is why it didn't work" or "Here's why we do it this way, instead of the way you're suggesting." We never have had that dialogue, and we never did have it while I was on the bench.

RL: I think that one thing you'll find with my opponent is that if I say X, he'll say Y, whether it's misleading or not. ... He's never been to juvenile court; he doesn't understand domestic violence, obviously; he doesn't know anything about critical incidents or how those are handled or thought about how those are handled; and obviously he doesn't know anything about intake. He really doesn't. He's just thrown this Harris County program out there and said, "We'll be there, and we'll demand this kind of bond, and we'll do that." And that's his "new ideas." But he does not know what goes on at the District Attorney's Office, the breadth of the responsibility.

CB: I think the people of Travis County are more amenable than anybody else in Texas to the kind of campaign I'm trying to run, which I think is an intelligent, issue-oriented campaign. And ... I think I'm right on the issues. ... I think that once they say, "Wait a minute, we're keeping innocent people in jail? We have programs that discriminate against minorities and we're not trying cases the way we ought to."

RL: The voting public in Travis County wants to be safe. I get that sense from people I talk with, that they want me to exercise good judgment, and they want me to be balanced. They want me to give second chances where they're due, and make sure that people have an opportunity to make it and get out of the cycle, but that if they're dangerous, they don't want them out on the street.

These selections have been excerpted from the full-length interviews we ran online with "D.A. Face-Off," Jan. 20. Find out more about Baird and Lehmberg online at austinchronicle.com/elections. 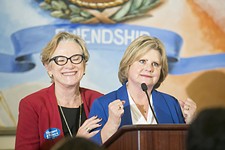