Planned Parenthood in the WHP: On Again, Off Again 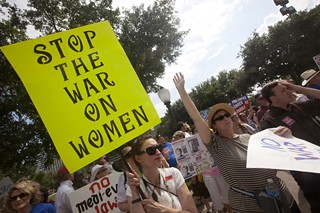 Protesters gathered last weekend at the state Capitol to rally against the ongoing war on women's health. (Photo by Jana Birchum)

At press time, 49 of the state's Planned Parenthood clinics – and thousands of clients who rely on their services – were waiting to find out whether the state would be allowed to ban them from serving women enrolled in the Women's Health Program. On April 30, federal District Judge Lee Yeakel ruled that the PP clinics should be allowed to continue delivering services – which they've done for the last five years as the WHP's largest provider of basic health care and family planning services – until a trial on the merits of a lawsuit on the issue can be heard. But in a late-night decision Monday by a single judge, Jerry Smith, the 5th U.S. Circuit Court of Appeals intervened, granting an extraordinary stay of Yeakel's injunction, apparently agreeing with the state that to allow PP to remain in the WHP – to continue with the status quo until the case can be heard – presents an "emergency" worthy of appellate action.

PP filed a response to the Smith stay on May 1. Now they wait.

After hearing arguments before him on April 19, Yeakel this week agreed with Texas' Planned Parent­hood affiliates that a plan by the state to exclude PP clinics from participation in the Women's Health Program likely violates their free speech and association rights, granting a temporary injunction barring the state from enforcing a new rule designed to keep PP clinics from providing basic health care and family planning services to thousands of low-income and uninsured women.

At issue is a rule newly adopted by the state that excludes "affiliates" of abortion providers, or groups that "promote" abortion, from serving clients under the WHP, a successful federal-state partnership enacted in 2005 (see "Perry Continues Assault on Women's Health Care," March 16).

Although the program always included a prohibition on abortion clinics providing services, it wasn't until last year that lawmakers sought to redefine the term "affiliate" in order to use that prohibition as a wedge to exclude any of the state's Planned Parenthood clinics from participation in the program. The 49 PP clinics statewide that provide WHP services do not perform abortions, but simply because they share a name with Planned Parenthood Federation of America, and with other clinics that do perform elective, legal abortions, that would exclude them from the WHP. This is no small issue: Although PP clinics make up just 2% of WHP providers, in 2010 the PP clinics served nearly half of the more than 100,000 WHP clients. When the federal government said last year that it would not renew the waiver program with the PP ban in effect – a ban that would violate longstanding federal law that ensures women access to health care providers of choice – Gov. Rick Perry blamed the likely breakup of the program on the Obama administration's "pro-abortion agenda," and said the state would go forward with its own WHP, paid for with state money only, and with the new anti-PP rule in full effect. That prompted the affiliates to sue, arguing that the rule violates their First Amendment rights to free speech and association, as well as their 14th Amendment right of equal protection under the law (see "Planned Parenthood Has Its Day in Court," April 27).

Although the state argued in court last month that excluding PP from the WHP is "germane" to the program's goals of increasing access to family planning and reducing the number of abortions in the state, Yeakel did not find the state's arguments compelling enough to deny PP the injunction that would keep the rule from taking effect – at least until a full trial on the merits can be heard. "Texas is reaching beyond the scope of the government program and penalizing [PP] for their protected conduct," Yeakel wrote. "Accordingly, the rule will not withstand constitutional scrutiny, unless Texas comes forth with a compelling interest to justify the rule's existence," he continued. "It is unlikely that Texas will be able to do so, even accepting [Health and Human Services Commissioner Tom Suehs'] assertion that one purpose of the Women's Health Program is to reduce elective abortions by preventing unwanted pregnancies by subsidizing birth-control strategies that do not involve elective abortions." Though the state may have a "compelling" interest in "protecting and promoting respect for fetal life after viability," there is nothing in the record to reflect that the new WHP rule "is necessary to advance that interest."

In order to win the injunction, PP had to show not only that it had a likelihood of winning its lawsuit, but also that a substantial threat to "irreparable injury or harm" will result if the injunction is not granted, that the threatened injury outweighs whatever harm the injunction would cause the state, and that granting the injunction would not "disserve the public interest." To allow the rule to go into effect would gravely injure not only the PP clinics but thousands of women who use those clinics for service. PP would be forced to close clinics and lay off staff; indeed, if barred from participation in the WHP, PP of Hidalgo County would lose $1.4 million in annual funding (half its budget), would have to lay off more than a dozen staff members, and would have to close two of three clinics, which currently provide WHP services to nearly 6,500 women, according to a lawyer representing the clinics. PP of Lub­bock would lose 60% of its revenue and would likely have to close its only clinic, which serves nearly 2,000 WHP clients, who would otherwise have to get on a three- to four-month waiting list to be seen at any other Panhandle provider. And it's not just WHP clients who would be harmed, Yeakel wrote. "If Plaintiffs are forced to close some health centers or to reduce their centers' hours, the tens of thousands of additional clients they serve will also be harmed."

Apparently Yeakel's reasoning did not impress Smith. Although he signed off on the stay of Yeakel's injunction without comment, he did so after the state filed a brief arguing that Yeakel's application of the law was flawed, including its reiterated argument that the state has the power to determine which providers may participate in a government program. If it can't exclude PP from the WHP, the state argues, it would have to open the program up to anyone who wanted to provide services. In court, Jonathan Mitchell of the state's solicitor general's office said that could mean that even groups that promote eugenics could provide services under the WHP.

PP filed a response to the Smith stay on Tuesday afternoon. A ruling is pending.