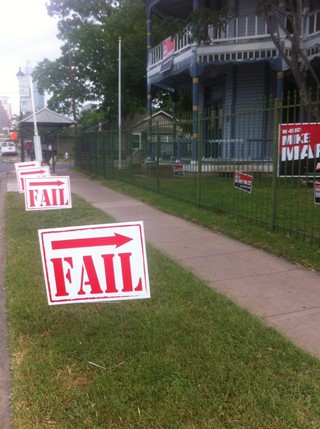 Among the many campaign signs currently posted along Austin roadways – it's a real bull market in 4-foot-by-8-foot plywood – you may have seen smaller ones, usually near campaign signs supporting Mayor Lee Lef­fing­well or Council Member Mike Martinez, with arrows pointing to those signs and a single word: "Fail." It doesn't take a Talmudic scholar or even a legal expert to conclude the smaller signs oppose Leffingwell and Martinez's candidacies and favor their opponents in the City Council election. Yet the signs have no legally required disclosure statements reflecting who paid for or posted them (nor do any campaign filings itemize those expenditures).

Nonetheless, it's no mystery who's posting the signs. Texans for Accountable Government co-founder John Bush brags about the signs on his Facebook page, as he did during the 2011 Place 3 campaign, when he and electric cabster Chris Nielsen (and perhaps others) posted signs mocking then-incumbent Randi Shade. Without the required disclosures, the signs also constituted illegal litter in the right-of-way – but when Shade disposed of them, the posters complained she had "stolen" their signs. Similarly, Leffingwell and Mar­tinez campaign workers have been plucking "Fail" signs from various sites – including several posted over last weekend in front of Martinez's campaign office, an achievement duly celebrated in a photo on the Facebook page of TAG Executive Director Heather Fazio.

I asked Bush, via email, if he believes campaign laws enforcing transparency and accountability should be obeyed or ignored.

Bush freely admitted "helping to push" the signs, although he said someone else is producing them. But he insisted they are not illegal, because (as he sees it) they do not constitute "express advocacy" under the Texas election code – that is, they do not specifically advocate the election or defeat of a candidate. Moreover, since he is a self-defined "libertarian anarchist," he needn't obey "unjust laws" that restrict his right to post signs wherever he likes. While it's "prudent" for campaigns to disclose such things, he wrote, such niceties do not apply to people like him.

Bush and TAG endorse Clay Dafoe for mayor and Laura Pressley for Place 2. Bush has contributed the $350 limit to Pressley's campaign (not including the signs), and Pressley is on the TAG steering committee. I asked Pressley via email what she thought of Bush's tactics and his legal theories. She replied, "The Fail campaign that is being supported by others is not within our influence and they are not donating the signs to us and our campaign is not associated with the efforts. ... The type of advertising you highlight is clearly not my style."

In other words, everybody's accountable – except Texans for Accountable Government.

For continuing coverage of the city and primary campaigns, see austinchronicle.com/elections. 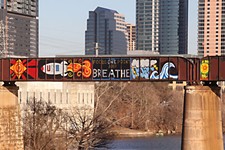