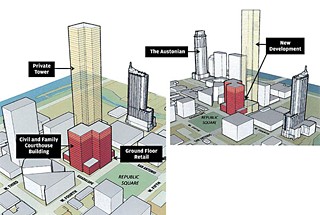 One scenario from two perspectives: County commissioners have been presented with several potential scenarios for a courthouse campus. Scenario C, shown here, would include a 72-story skyscraper and could add as much as a million square feet of retail and other commercial space to the county tax rolls. Planners emphasize that this is one of a handful of conceptual drawings, not an actual proposal.

The lot at Third and Guadalupe sits in the middle of an area checkered with skyscrapers. The site is not subject to Capitol View Corridor height restrictions, and yet the extent of current development on the spot is a parking lot.

That's not for any lack of trying. The Austin Museum of Art spent three decades in various, and finally, vain attempts to turn the spread into its Downtown home. Travis County bought the block in late 2010, returning the land to county control; in 1855, it was the site of the original Travis County Courthouse. Some­time in the near future, county officials hope to bring their silver shovels there to kick off work on what might become the largest building west of the Mississippi Riv­er, should construction eventually extend to all of the nearly 2 million square feet that could be accommodated at the site.

Travis County's longstanding, desperate need for a new courthouse (see "The Sky's the Limit," Dec. 24, 2010) spurred the purchase, and in theory, the deal represents a happy solution for the county's most pressing facilities problem. But, with a twist of internal politics, the complications that would accompany any project on this scale have been multiplied for the county. Consid­er­ing the county's recent history of tripping over large-scale projects and its habitual lack of adequate planning, the circumstances that face county officials are daunting. But, should it succeed despite these odds – and the real difficulties have yet to begin – Travis might just drag itself to the forefront of innovative development.

The county's most notorious major facilities project, the Blackwell-Thurman Crim­in­al Justice Center, left major managerial scars that have long dogged Travis County officials. Poor project management, which stemmed from a lack of organization, led to delays and cost overruns. Bonds were issued in 1993, and construction eventually began in 1997, but the CJC continued to expand in scope well past its initial stages, a situation that was compounded by the fact that no one was ready – at least for a while – to step in and play wrangler.

Four years later, the county found itself with a building which no one seemed to like, cost $23 million more than anticipated, and ended in litigation. Of the current court members, only County Judge Sam Biscoe (then Precinct 1 Commissioner) had a seat on that body when Travis voters approved a set of bonds to build the facility. He maintains that the project hasn't made the county hesitant to pull the trigger on other major facilities efforts. Most other members of the current court – including Precinct 4 Com­mis­sioner Margaret Gómez, who was first elected in 1994 and experienced much of the CJC debacle firsthand – admit that the CJC experience colors their decisions. "I know I'm gun-shy because of that experience we went through with that CJC," Gómez said. 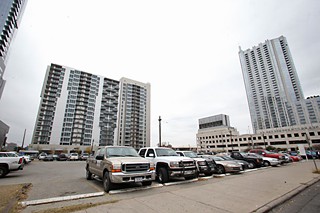 The county has purchased this parking lot site, between Third and Fourth streets along Guada­lupe, to build a new civil and family courthouse. (Photo by Jana Birchum)

Former Precinct 2 Com­mis­sion­er Karen Sonleitner took office at the same time as Góm­ez. "I wouldn't use the word 'gun-shy,'" she says in reference to the effect of the CJC, "but I would use the words 'extremely thoughtful.'" Sonleitner, however, suggests that the imprint may be more positive than negative. "It kind of gives you a mental checklist of every question you'd ever have to ask."

Whatever the case, the fact that commissioners continue to think about the CJC project – and raise it in the context of the county's next major construction effort – seems to illustrate its lingering effect on county policy.

Precinct 3 Commissioner Karen Huber says that the lack of any real comprehensive facilities plan before 2002 has significantly affected the county. "A lack of vision and coordinated direction always hurts an organization – particularly one the size of the county. Without one, there is no common vision and often the right hand doesn't even know what the left hand is doing," she said. "With the exponential growth that Travis County has experienced, the county now finds itself way behind the eight ball in addressing facility needs. It will cost the county much more, now, to catch up with the facilities needs than it would have if they had been addressed through the years in a planned and methodical way."

Precinct 2 Commissioner Sarah Eckhardt agrees. "In most of the 254 counties in Texas, master planning isn't really needed," she said. "But in major metropolitan counties, it has become an absolute necessity. Travis County has been perhaps a little slow in coming to that realization." Biscoe isn't so sure. "I cannot recall an incident that would have been averted had a master plan been in place. Master plans cost a lot to prepare and adopt, and there is no guarantee that they will be used," he said. "They may be worth the investment. However, to date, that has not been demonstrated in Travis County."

Still, in 2009, the county hired outside facilities management firm Broaddus & Associates, at a cost of more than $1.5 million, to come up with what was subsequently called "Travis County Central Campus 2010-2035: Strategic Needs Analysis & Facilities Master Plan." In a February 2010 presentation to the court, Broaddus suggested that the county would need roughly 1.1 million net occupiable square feet by 2035, or just about double what was available as of 2010. Based on those numbers, Huber's "behind the eight ball" seems accurate.

The space assumptions were part of a larger effort, one that would eventually find the court approving a Downtown county campus that would both expand the number of buildings it occupied, and relocate a host of offices around the Guadalupe corridor. In December 2010, the court finalized acquisition of the lot at Third and Guada­lupe. Then, in a separate presentation in Octo­ber 2011, the court heard from Broad­dus about the future potential of the lot they'd bought almost a year before. Com­mis­sioners saw four development scenarios, the tallest of which would produce a 72-story skyscraper. None of the scenarios were yet potential designs; Broaddus had simply brought them to the court to illustrate the potential size of the project. 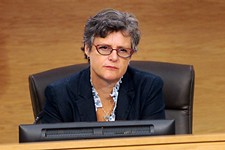 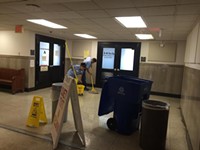