The Cisco Story: More Than Meets the Social Media Eye

Campaign for Cisco grows as questions arise about his owner 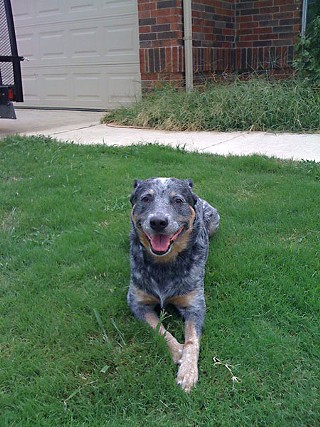 Cisco, a blue heeler, was shot by APD Officer Thomas Griffin earlier this month. (Photo courtesy of Justice for Cisco)

In the days since "Justice for Cisco" became an Austin-based international Face­book phenomenon (more than 100,000 "likes" as of Monday), there have been several new developments in the story of the officer-involved dog shooting. The Austin Police Department has issued a formal apology to Michael Paxton for the shooting of his blue heeler, Cisco, the afternoon of Saturday, April 14, and Chief Art Acevedo offered his personal apology as well. Acevedo also offered to arrange a meeting between Officer Thomas Griffin, who shot the dog during a brief confrontation with Paxton at his home, but Paxton declined, accusing Griffin of lying and the APD of misrepresenting what happened. He said that while Acevedo's apology had seemed sincere, he's outraged that the department has engaged in a "smear campaign" against Cisco, such as suggesting in a press conference that the dog had a "history of aggression." Surprised to find himself thrust into the role of "animal activist" – Paxton's promoting a petition campaign to change APD weapons policy concerning animals, and has just established a legal fund, soliciting donations for a potential civil action against the city and the officer, and he hopes there will be legislative action concerning police treatment of animals. In a phone interview, he reiterated his charges that the shooting was completely unnecessary, that the officer has since lied about what happened, and that the APD is more interested in covering for its actions than reforming its policies. The shooting incident remains under review by APD.

APD and other city officials have been deluged with phone calls and emails denouncing the shooting of Cisco, demanding that Griffin be fired or indicted, and including at least some death threats against the officer or others. In an open letter to the community, Acevedo asked for time for his department to conduct "a thorough and thoughtful review," and wrote: "Many of the written and telephonic contacts with members of our department have been vile, and included serious threats, including threats to shoot our officer(s). ... There are a lot of questions that have to be thoroughly explored and we can not allow a mob mentality to influence our follow-up in this matter." More recently, questions have also been raised about Paxton's own honesty and previous conduct. The Chronicle has learned that Paxton is the primary suspect in two serious vehicular hit-and-runs. Next month, in the aftermath of one incident, he is scheduled for both a misdemeanor DWI hearing and a felony court hearing concerning a Sixth Street hit-and-run that took place Nov. 30, 2011, when a bicyclist, Patrick Ryan Murphy, was knocked unconscious and injured, and the driver fled the scene. According to Assistant District Attorney Mary Farrington, Paxton was arrested nearby, identified by witnesses, and charged with driving while intoxicated and failure to stop and render aid.

Moreover, the day before the bicyclist was hit, Paxton's insurance company made an offer to settle a civil lawsuit concerning an earlier incident: the Nov. 15, 2009, hit-and-run collision with a pedicab at the corner of Fifth and San Antonio streets. The pedicab driver, Matt Cama­cho, and his two passengers were injured, Camacho most seriously. According to a witness, Camacho was thrown several feet into the street, and it appeared he was in danger of bleeding to death; some of his injuries persist three years later. Paxton vehemently denies being involved, but there was significant circumstantial evidence that he had been driving the raised white SUV that fled the scene, according to eyewitnesses. "I don't know anything about that," he said. "That had nothing to do with me." As for the insurance settlement, he said, "That was between the insurance company and those people. I don't know the details, and it wasn't discussed with me." Attorney Shane Boesberg, who represented Camacho, said Paxton's insurance company settled the civil lawsuit "for the maximum amount of the insurance policy, based upon the evidence, before trial." The settlement offer was made on Nov. 29, 2011, and finalized the following month. Paxton was never indicted in the 2009 incident, although he did own a white SUV that fit the witness descriptions (apparently the same white Chevy Blazer he was driving last November), police photos of the vehicle show collision damage to the right front, and the police report reflects that the damage appears consistent with a collision with a pedicab. It's not clear why police or prosecutors did not pursue charges in the case.

Paxton is aware that his legal problems are beginning to attract attention; this week he posted on the Justice for Cisco website: 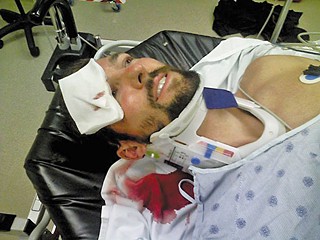 "Please be aware that there are individuals that are trying to undermine this cause because of some legal issues I am dealing with that have nothing to do with Cisco's shooting. Let it be known, that I have never been convicted of ANYTHING. And neither has my dog.

"This situation has NOTHING to do with MY past. This is about the unnecessary killing of my dog, and the actions of the officer involved.

"Thank you for your continued support and understanding."

It's true Paxton has not been convicted in either of these incidents, and they are distinct from the confrontation that led to the shooting of Cisco. But Paxton has accused Griffin and the APD of lying, and he and his supporters have been vociferously demanding "justice" and "accountability" from the APD – standards that might in turn be applied to him. Paxton referred all specific questions about the pending hearings to his attorney, but said, "I'm doing what I'm required to do by law. I am living up to my end of the deal."

The incidents also raise questions about Paxton's own credibility – specifically, about his dispute with Officer Griffin over the level of Cisco's apparent aggressiveness. Paxton has insisted his dog was not aggressive and that it had never bitten anyone, but there are at least two animal control complaints on file against the dog, including a bite complaint. Paxton dismissed the claims as exaggerations not relevant to the officer's actions.

Camacho concurred that Paxton hasn't been convicted of any crime but commented about Paxton's current campaign on behalf of Cisco. "I was a little irked, seeing all the news about him, that he's become something of an advocate for justice – and yet he's probably effectively evaded justice for the last couple of years."