Planned Parenthood Has Its Day in Court

Is banning PP from the Women's Health Program unconstitutional? 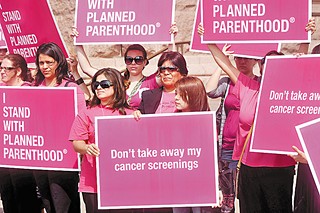 Women rallied at the Capitol last spring in support of Planned Parenthood, which last week sued over the state's attempts to exclude it from the Women's Health Program. (Photo by John Anderson)

Does banning Planned Parenthood from participation in the Women's Health Pro­gram actually further the goals of the program? Or is banning the veteran women's health provider an unconstitutional move designed to punish the provider for its advocacy on behalf of reproductive choice?

Those were among the questions advocates for PP and the state raised during a hearing April 19 before federal district Judge Lee Yeakel. PP has sued the state for its attempts to block PP clinics from participation in the program, saying the exclusion violates the nonprofit's First Amend­ment rights of free speech and association, as well as its 14th Amendment right to equal protection under law. PP is the largest provider in the WHP; in 2010, PP clinics across the state served 46% of the more than 100,000 women who received services. Last year, the state sought to exclude the PP clinics by arguing that those that participate are nothing more than "affiliates" of clinics that perform or "promote" abortion. That in turn prompted the federal government to inform Texas that it would not be able to continue the federal-state funding partnership that had helped to make the program such a money-saving, health-care-expanding success over the last five years. Indeed, the program as codified by lawmakers in 2005 was a Medicaid-waiver program, offering Medicaid-subsidized health care to women who would not otherwise qualify for the government-paid health care unless pregnant. As such, for every $1 the state kicked in, the feds put up $9. The goals of the program were to expand access to health care for the more than 1 million uninsured Texas women who need it and to cut down on Texas' Medicaid-paid births – currently more than half of the state's births – and thus to reduce the number of abortions. But the move to eliminate PP, a qualified provider under Medicaid law, conflicts with federal law that ensures individuals are able to access a provider of their choosing, so the feds told Texas the partnership would be dissolved if the state insisted on enacting its new rule and excluding PP.

Gov. Rick Perry, among other state officials, has laid the blame for the breakup of the partnership firmly at the feds' doorstep. "[I]t is unacceptable that the Obama Administration is denying Texas taxpayers the use of [tax dollars] to fund this program, simply because of its pro-abortion agenda," Perry said in a March press release. He announced that the state would move forward with its own WHP, funded entirely by the state – and with the ban on PP firmly in place. That, however, has in part spurred the latest legal action: The state may not ask the providers to abandon Constitutional protections in order to be eligible for funding, argued Planned Parenthood Federation of America lawyer Helene Krasnoff.

But according to Jonathan Mitchell of the state's Office of the Solicitor General, allowing PP to participate in the program actually undermines the state's goals for the WHP. The state "established the WHP to subsidize and promote methods of family planning that do not involve abortion," he told Yeakel. And the benefit the state sees from that, he argued, is not only expanded access to health care for low-income and uninsured women, but also a reduction in abortion. But the state's decision to cut PP out of the loop not only violates the organization's rights – including to speak freely about reproductive choice and to associate with member clinics that advocate for legal access to reproductive choice – but also harms tens of thousands of women who rely on PP to get the family-planning health services that have a demonstrated impact on reducing abortion. "There is no evidence" that the women who currently rely on PP would "be able to find another provider" if PP is cut out of the program, Krasnoff argued. While the state has harped on the fact that there were 1,500 WHP providers on the rolls in 2010, most of those serve very few clients, she said; a quarter of them served just one client that year. Sixty providers saw fewer than 10 clients, and 90 saw fewer than 100 clients, she noted. In contrast, PP, which makes up just 2% of WHP providers, served more than 40% of all clients. "There's no way those facts can bear out that 40,000 women [served by PP] will have access to services" if PP is kicked out of the program. "Even if they could find a provider, the disruption alone – finding a provider, transferring their records ... that alone disserves the public interest."

Mitchell argued, however, that PP could go ahead and serve those women if they wanted to; the rule does nothing to block women from seeking out their provider of choice. Rather, he said, it just means that PP would not be reimbursed for those services. He suggested the clinics could use private donations to continue providing care.

But Krasnoff said the rule itself conflicts with state law that controls the WHP; current statute provides that any rule or new law passed that would cause the state to lose federal funding for the WHP is to be struck down. Mitchell countered that Yeakel's federal court has no standing to rule on the state law claim raised by Krasnoff and should not consider that argument in making any ruling.

In the end, Mitchell charged that the court would be causing women to lose health care should it issue an injunction stopping the rule from taking effect, since the state has concluded that the program will otherwise be disbanded. But in response to a question about that from Yeakel, Krasnoff disagreed: The program has been working just fine for the last five years with non-abortion-providing PP clinics participating, and there is nothing to stop the state from continuing on as it had. The problem is an artificial one, she argued, created in whole by the state. "The rule is the number one goal they have," she said, "and the rule is unconstitutional."