DiverseArts Culture Works founder / director travels to Houston due to a death in the family, and gets roughed up by police and arrested 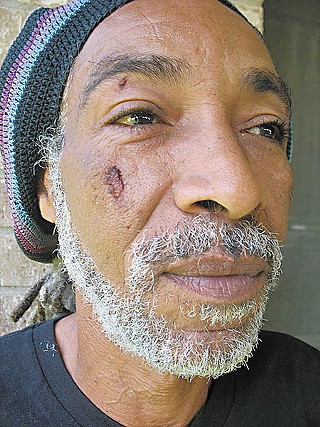 This photo, taken four days after his encounter with Houston Police, shows Harold McMillan with a deep gouge on his face. Other photos show scrapes and bruises on his torso and arms. (Photo courtesy of Harold McMillan)

Pummeled as we are with news of fresh incidents of police brutality and racial profiling in cities across the U.S., we might have become jaded about that thread of the info feed. We might be particularly unsurprised when the incidents involve people of color and the city of Houston.

Given our self-protective habit of taking troublesome police incidents in stride, the shock and outrage that jolted Austin's arts and Eastside communities when DiverseArts Culture Works founder/Director Harold McMillan returned from a Houston jail cell recently, bruised and beaten, was telling.

Anyone who knows McMillan can't conceive of his involvement in the police conflict that resulted in his beating and arrest. "I've worked side-by-side with him at many neighborhood meetings," said neighbor Valerie Thatcher. "Those can get pretty heated and contentious. I've known Harold for 13 years, and I have never once heard the man raise his voice. He's always had a calm demeanor."

Austin Center for Peace and Justice President Rudy Williams, who has worked with McMillan as a musician and on neighborhood planning, concurred. "Harold is the nicest, most level-headed person I know," he said. "If there's a negotiation to be made, there's no one I would suggest who is better at communicating with people."

"But I'm also from Houston," Williams went on, "and I understand the problem that we have with the police mentality in terms of black men who are articulate, know their rights, and speak up for justice. A lot of times, that alone will carry you into [a] danger zone in terms of interacting with the police."

McMillan said the trouble began on April 5, when he traveled to Houston's Memorial Hermann Hospital to retrieve (by prior arrangement) the belongings of his brother, who had died there a week earlier. When he arrived, McMillan said in a phone interview a few days later, he was told the items couldn't be released due to a bureaucratic snafu. McMillan said he then began calmly working his way up the administrative chain of command. While he waited for an administrative supervisor, he said, a security supervisor admonished him for his attitude, speculated about a family fight over his deceased brother's belongings, and said things might have gone better if McMillan had worn a suit instead of shorts and a T-shirt.

After ignoring insults through several more exchanges, McMillan said, he asked the man to "'stop acting like a fucking cop and please just get the supervisor.' It's the one and only time I swore during the entire exchange."

The security supervisor called Houston Police Department officers instead. When they tried to move him to a back office, McMillan said, "I told them I would be more comfortable if we stayed where there were cameras." An officer then put McMillan's arms behind his back, he said, lifted his 125-pound frame off of the floor, and moved him roughly toward the office while admonishing him to "stop resisting."

McMillan said the officer shook his phone out of his hand after he attempted to record the encounter, slammed him through the office door and onto the floor, placed a knee on his back, and cuffed him tightly. Photos of McMillan taken four days later show a deep gouge on his face and scrapes and bruises on his torso and arms. McMillan remained cuffed and was refused medical care for hours, he said, then arrested for "interfering with the duties of a public servant" and taken to jail.

Asked about the incident, hospital spokeswoman Alex Rodriguez said, "Unfortun­ately, our security department didn't know [McMillan] was authorized to pick up [his brother's] belongings. The situation escalated, and at that point HPD was called, and Mr. McMillan was arrested on our campus."

HPD spokesman Victor Sen­ties said the police report cites "abusive language," a refusal of "verbal commands," and resistance to being taken into custody as the reason for McMillan's arrest. He said that HPD will not investigate unless McMillan files an internal affairs complaint.

McMillan said he plans to do that, as well as file a complaint with the state agency that licenses private security companies.

At the moment, though, he is still "somewhat in shock," he said. "I think the biggest thing that I'm dealing with is that this is interfering with my grieving process of losing my friend, my brother," he said. "I'm traumatized by the experience, and I don't use that term lightly. It's affecting my sleep; it's affecting everything. My body still hurts." 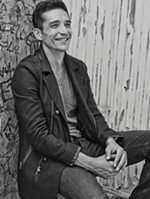