Then There's This: Westward Hos?

City Council Takes Its Rate Case to the People of Lakeway 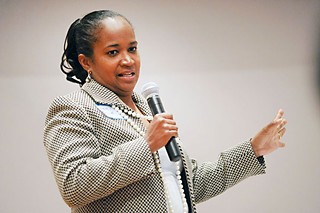 This Saturday, April 14, Austin City Council members head west to the resort community of Lakeway to hear what out-of-city residents think about a proposed electric rate increase. Of course, council already knows what those residents think about the rate package – they loathe it, even with the possibility of a 6.1% discount on their bills. If the city does decide to grant them a rate break, Austin residents will have to make up the cost difference on their utility bills.

Earlier this year, Mayor Lee Leffingwell and Mayor Pro Tem Sheryl Cole championed the idea of extending an olive branch to the suburban ratepayers. On the campaign trail, though, Leffingwell has backed far away from that initial offer, saying he may not even attend the Saturday hearing. Cole, on the other hand, seems to have embraced her new role as outreach coordinator.

She said the city of Lakeway agreed to host the event because most of the concerns were coming from residents who live in communities west of Austin. "We're looking forward to ... hearing from these ratepayers," she said. "We want to listen to their concerns and consider them as we consider what we're going to do with [the rate case]. We want them to be part of the dialogue."

On the proposed cost break, Cole said, "At this time, I don't think anyone on council has said that they support a discount" for out-of-city ratepayers. Of course, that depends on one's definition of discount. Austin opponents of the rate hike tend to point to Leffing­well for inviting the showdown with suburban ratepayers, an issue that could ultimately be decided by the Legislature.

To be clear, Leffingwell did not specifically say that out-of-city ratepayers should get a discount on their bills when he panned the original rate package in his Jan. 15 blog post. But he did say, "I believe this is the right time to give consideration to the concerns of ratepayers who live outside the Aus­tin city limits, which the current proposal does not do." He went on to say that out-of-city ratepayers don't have the ability to vote for City Council members and that AE transfers a large sum of money each year to the city's general fund to help pay for public services "that they may not directly receive." He went on: "As we weigh a rate adjustment that would impact all customers, it's the appropriate time to also weigh options for more fairly serving the interests of non-resident customers."

Leffingwell was roundly applauded for being the first on council to stick his neck out and criticize the initial rate proposal on several points. But he hasn't been able to live down his suggestion that the city consider other options for those suburban residents who make up about 14% of Austin Energy's 450,000 customers. Mayoral opponent Brigid Shea called Leffingwell's comments "reckless," adding that he's contributed to laying a "big mess" of a rate case on the steps of the Texas Capitol.

In any case, two weeks after the mayor's critique of the rate case, AE General Manager Larry Weis returned to the council with a revised proposal – this one offering the 6.1% discount to non-city residents.

"I hate to think what this will do to incent wealth flight to the suburbs," said environmental activist Paul Robbins of the possible rate break for non-city residents. "The theory of entitlement vanishes when you face the facts. No private utility – phone, gas, cable, private electric utility – goes without a profit outside the Austin city limits. No other large municipal utility in Texas has separate rate structures inside and outside their cities."

Cole herself acknowledges what bears repeating every time we write about electric utility rates – that a large share of non-city ratepayers regularly commute to Austin to work, and to use and enjoy many of the city's services and amenities paid for by Austin Energy's revenue stream. "We very much welcome the fact that they work in Austin and visit our tourist attractions and restaurants and shopping centers," she said, adding that it's her goal to continue building on the relationship with cities whose residents also benefit from everything Austin has to offer.

Predictions are that things could get ugly at the Lakeway hearing because of the legislative threat to settle the "taxation-without-representation" refrain of out-of-city ratepayers.

Cole says she welcomes the feedback regardless of how it's delivered. "I live in the city of Austin; you think I'm not used to being yelled at?" she said with a hearty laugh. "I don't think the people in the service area are capable of doing anything that I haven't experienced before – we take it on the chin all the time. I hope the Legislature recognizes that these are our customers and we'll do our best to reach out to them."

Good luck with that.