Does this leafy mainstay at the corner of Martin Luther King Jr. and North Lamar boulevards pose a safety threat? (Photo by John Anderson)

Last November, when the owners of the old Dreyfus Antiques store at 1901 N. Lamar were applying for rezoning in anticipation of selling the property to a small banking concern out of Plano, a restrictive covenant was added to the zoning ordinance stating that the enormous oak tree on the property could not be removed unless it satisfied criteria under the city's Environmental Criteria Manual – basically, unless it was determined that the tree poses a danger.

Well, about a month ago, the tree's new owner, Benchmark Bank, made a tree-removal request with the city of Austin, claiming the oak poses a safety hazard to passing motorists, pedestrians, and future bank employees. According to the two private arborists the bank hired, the oak is a high risk because of structural problems, namely that several of its branch/trunk unions have narrow angles, meaning the bark where the branch and trunk meet is likely to split. City arborist Michael Embesi says bank representatives have asked him to hold off on making any ruling while they gather more information and meet with neighborhood groups. "They're feeling the situation out," said Embesi. "They're well aware that it's an important tree, so they're collecting information on its structure and health." Embesi said he currently has no plans to address the case.

Megan Filgo, a vice president with Bench­mark, told the Chronicle her company has no interest in cutting down the tree if saving it is an option. "We love the tree," she said. "It's one of the reasons we bought the property. But safety is our biggest concern, so we're looking into it more carefully. If there's any way we can save the tree, we're going to." Filgo says the Austin team is "exhausting every resource," including hiring more arborists and meeting with neighborhood leaders. "We're a small neighborhood bank," she said. "The bulk of our customers live near our branches. We want to know our neighbors; the last thing we want to do is upset them."

Not everyone is convinced. Tim League, owner of the Alamo Drafthouse chain of movie theatres and a neighbor of the new bank, told the Chronicle in an email that he's convinced Benchmark is trying to "bypass the system to cut down the tree," and that Embesi "is seriously considering granting a waiver" to cut the tree down.

On the phone earlier this week, League sounded cautiously optimistic that Bench­mark and the city are doing their best to save the tree. "I hope they do want to preserve it," he said. Still, the memory of another heritage tree cut down two years ago without permits by owners of a property adjacent to the Dreyfus site has made League and others in his West Campus neighborhood jumpy. "I'm always skeptical, always nervous," he said. 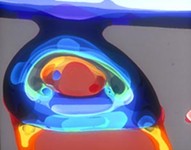