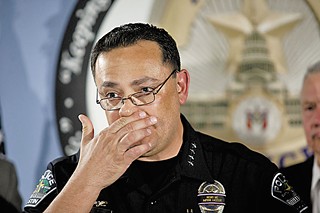 APD Chief Art Acevedo is overcome by emotion as he discusses the shooting death of Officer Jaime De Luna-Padron. (Photo by Jana Birchum)

Austin Police Chief Art Acevedo began to cry as he recalled how the 6-year-old daughter of slain APD Officer Jaime De Luna-Padron leaned in to whisper in his ear Friday afternoon. "'Please tell my grandparents that my dad was a good man,'" he said the little girl told him. 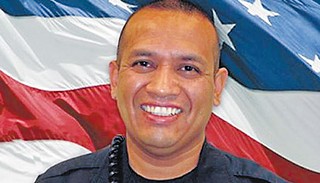 Indeed, Padron – a Marine who served in both Gulf Wars and spent 14 years with the San Angelo PD before coming to Austin in 2008 to join the airport police, and then APD after the city consolidated its policing operations – was, by all accounts, a stand-up guy. "He was a very close friend, a dedicated father," said retired APD detective and former Austin Police Association President Mike Sheffield, who recruited Padron to come to Austin. "He was an outstanding officer and a fine human being." Funeral services were held Wednes­day.

Padron was killed after responding to a call at a North Austin Walmart store around 2:20am on April 6. Store employees had called about a man – whom Acevedo identified at a Friday press conference as 24-year-old Brandon Montgomery Daniel – who was acting strangely, was "possibly intoxicated," Acevedo said, and was trying to shoplift from the store. When Padron arrived at the store, Daniel was trying to leave; Padron reached out for the man's arm to stop him. "I need to speak with you," he told Daniel, according to an arrest affidavit filed Monday morning. When Daniel "ducked his shoulder" in an attempt to get away, Padron "sternly" told him to stop. Daniel instead ran for the door; Padron tackled him from behind and the two fell to the floor. Quickly and without warning, Acevedo said, Daniel pulled a semiautomatic pistol from his pocket and fired at Padron. Acevedo said Padron died from a bullet wound to the neck. 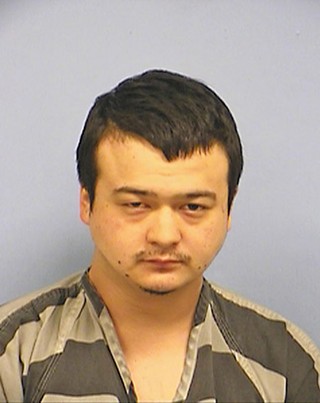 After Daniel fired, Walmart employees Lincoln LeMere, the overnight shift supervisor, and Archie Jordy, an assistant manager, took action "immediately and without hesitation," Acevedo said. They wrestled Daniel to the ground, and used Padron's radio to call for police. Officers arrived and tried to resuscitate Padron, but it was too late; the neck wound was fatal, and he was pronounced dead at the scene. It was a call for service that "appeared on the surface to be a low-risk call," Acevedo said. "Without warning," it turned deadly.

Daniel is in custody, without bond, and has been charged with capital murder of a police officer, a death-eligible offense. Daniel worked as a software engineer at Hewlett-Packard, where he'd been employed since coming to Austin about a year ago from Colorado, where he graduated from Colo­rado State University in Fort Collins. Daniel was arrested by APD in February for drunk driving; that case is pending. Accord­ing to the arrest affidavit, as he was being brought into the police station for questioning, Daniel admitted that he knew he'd killed a cop. "Daniel stated that he intentionally shot ... Padron, in the region of the head," as the officer "attempted to hinder his flight during the commission of theft." Daniel's mother, Mary O'Dell, told the Associated Press that her son had been depressed recently after a breakup with his longtime girlfriend.

Daniel's roommate, Kelvin Davis, told APD detectives that when the two were "hanging out" Thursday evening, Daniel mentioned that the two should "go hit a store." Davis told police he initially thought Daniel meant the two should go grab a bite to eat; but when Daniel started wondering aloud about how much money might be in the cash registers at a local convenience store, he said he realized Daniel was talking about robbery. "I reminded Brandon that he has a DWI in Austin and a possession of marijuana charge in Tulia," Davis told police, according to an affidavit. "Dude, I've gotten away with worse shit than that," Daniel allegedly responded. "I run from the cops on my bike almost daily." Davis said he went to bed around 9pm; it was the last time he saw his roommate.

Padron was the first APD officer shot and killed in the line of duty since Ralph Ablanedo was gunned down in 1978; David Lee Powell was executed in 2010 for that killing. The last on-duty death occurred in 2004, when Officer Amy Donovan was accidentally struck by a police cruiser while she was pursuing a suspect on foot.

The 100 Club of Central Texas has set up a trust for Padron's family, and donations can be made at any area Chase bank. Additional donations may be made to the Greater Austin Crime Commission. 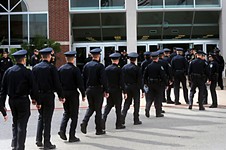 APD Officer Remembered Warmly at Funeral
Padron was well-liked for his bright smile, optimism, and 'heart of a servant'