The mayoral race could be described as "Classic" vs. "New Austin" – and voters will have to decide which candidate belongs to which era. Incumbent Lee Leffingwell is "running on his record," and among other accomplishments cites the major environmental initiatives on his watch: his work on water conservation, the renewable energy generation plan, initiating single-stream recycling, the ban on coal-tar parking lot sealants, the expansion of the Save Our Springs Ordinance to cover redeveloped land over the Edwards Aquifer, and the pending ban on single-use plastic bags. Challenger Brigid Shea points to her founding membership in the Save Our Springs Alliance and to the citizens' movement underlying the ordinance that established a "new political consensus" in the city that "environmentalism is good for our economy." She believes that legacy has diminished under Leffingwell, whom she says has not been "aggressive enough" in defending Austin's quality of life. She opposed the Water Treatment Plant No. 4 project (under construction, but still an issue in yet another election cycle), and she believes that the City Council's willingness to grant corporate "giveaways" (particularly the Congress Avenue convention hotel fee waivers and the Formula One project infrastructure) have undermined the city's finances and "paid corporations to come here" that would have relocated anyway.

Leffingwell responds that WTP4 is both a necessary and "sound environmental project" – replacing aged infrastructure and reducing the city's carbon footprint – and says that every incentive deal granted during his term by the council has been "cash-positive [for the city], performance-based, and providing good jobs." (Shea praised the recent Apple Inc. incentive deal as attracting "the kind of company we want," but also suggested that the city could have negotiated a better deal.) In brief, Shea's supporters argue that under Leffingwell, the city is in danger of losing its environmental distinction and its sustainable future; Leffingwell's campaign answers that the mayor's record on environmental issues is long and distinguished, and that it doesn't help Austin or Austinites to continually pit the perfect against the good.

More broadly, Leffingwell argues that "quality of life begins with a good job," and that Austin has weathered the recession more successfully than other regions in part because of city policies under his administration, and specifically policies that foster job creation at all economic levels. He points to the numerous national "best" lists on which Austin appears, and in his recent State of the City speech, declared bluntly: "Austin, Texas – our home – is the greatest city in America today. I believe that wholeheartedly, without apology, and without reservation." He went on to emphasize five critical areas for continuing attention as the city moves forward: job creation, traffic improvement, supporting the public schools, stabilizing the electric utility, and government reform (i.e., charter revision).

In her campaign thus far, Shea has touched on most of these subjects, and she differs with the mayor on several. She says the mayor has failed to be sufficiently proactive in supporting local schools, and says she will work to build a statewide coalition of mayors to support public education. She says the council waited too long to develop new rates for Austin Energy, called the initial AE rate proposal "appalling," and says the mayor and council have failed to preserve Austin's affordability.

Shea and Leffingwell diverge on charter revision as well: She endorses the 10-1 single-member district plan, and he supports "whatever SMD plan has the best chance of voter approval." Shea has been lukewarm about moving city elections to November but says she defers to the voters; Leffingwell supports and voted for the defeated council proposal to move the elections this year.

The third candidate, Clay Dafoe, is a political novice who describes himself as a "citizen-activist" whose involvement in city policy thus far has largely been confined to speaking at council meetings. He's a member of the libertarian Texans for Accountable Government, and has testified at council on "corporate subsidies, police accountability, wasteful government spending and the preservation of Constitutional rights." At campaign forums, he has spoken most consistently in opposition to economic incentives or any other interference by city government in the "free market."

Quote "In Austin, the possibilities always outnumber the problems." 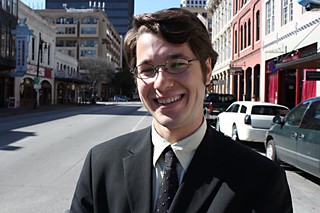